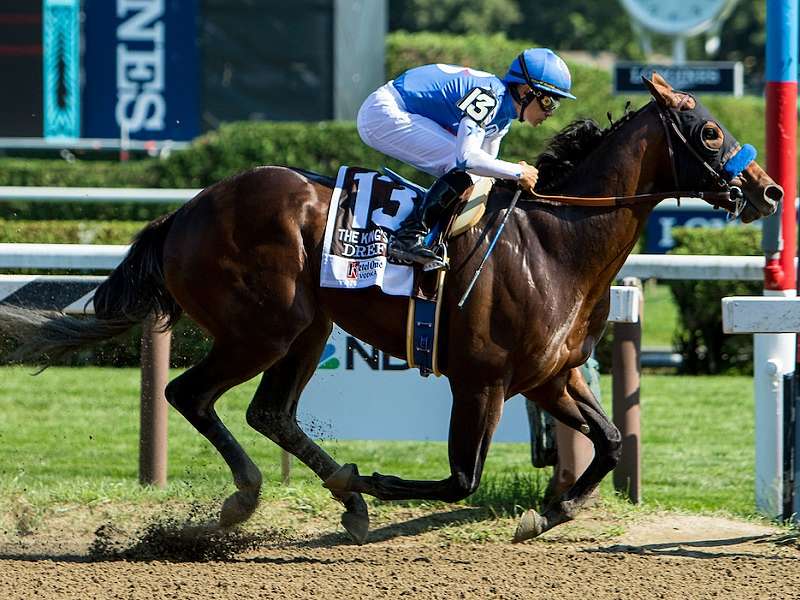 SARATOGA SPRINGS, N.Y. - Champion sprinter Drefong returned to the scene where he wired the field in last year's Grade 1 Kings Bishop, and repeated that effort against nine others in the Grade 1, $600,000 Forego on Saturday, Travers Day, at Saratoga Race Course.

Drefrong cut through seven furlongs in a final time of 1:21.12. His four-length victory will earned him a trip to California for the Grade 1, $1.5 million TwinSpires Breeders' Cup Sprint on November 4 at Del Mar.

Sent out immediately upon the gate opening, Drefong, ridden by Hall of Famer Mike Smith, opened a quick two-length lead followed in pursuit by Stallwalkin' Dude. The son of Gio Ponti rolled through an opening quarter mile in 22.89 seconds and then the half-mile in 45.58 while holding a length advantage.

"We just saw the real Drefong," Hall of Fame trainer Bob Baffert said from California. "It's a good thing that everything turned out all right because otherwise, I would have never brought him to the Forego. I was going to run him once there [Del Mar and then bring him into the Breeders' Cup Sprint], or maybe twice [in California]. I'd rather win the Forego than that other race. He's a great horse and he's always been a champion. When he hit that third gear there, I was really happy, and happy to hear the cheers. We put a lot of time into that horse."

Drefong extended his win mark to six. Sent off at even money, returned $4.30 to win.

"I was hoping that he would run like he did last year here," Smith said. "He really likes that summer breeze here. I knew that he was liking it today, and I was just thinking positive. I think he ran even better than last year."

Awesome Slew, running eighth down the backside, got up for the runner-up spot over longshot Tom's Ready, who had been last in the early going.

"I can't complain. He ran good," Awesome Slew trainer Mark Casse said. "I was hoping the pace would be a little quicker, but Johnny [Velazquez] said everybody broke and decided to take back."

Mind Your Biscuits, off of a 3 ½ length victory in the Belmont Sprint which followed a 3 length win in the Grade 1 Golden Shaheen in Dubai failed to fire after his mid-pack run and finished a disappointing sixth.

Drefong, now 2-for-2 at Saratoga, will return to California, but his next spot will be decided in the upcoming days.

"We gave him a lot of time off [almost nine months] and brought him back, said Baffert. "It was a lot of patience there. To bring him back to the Breeders' Cup we wanted to get two good runs in him. Sometimes things work out for the best. This was pretty exciting. He's a beautiful horse. I'll probably get him home and maybe run him at Santa Anita. We'll bring him back home and play it by ear."