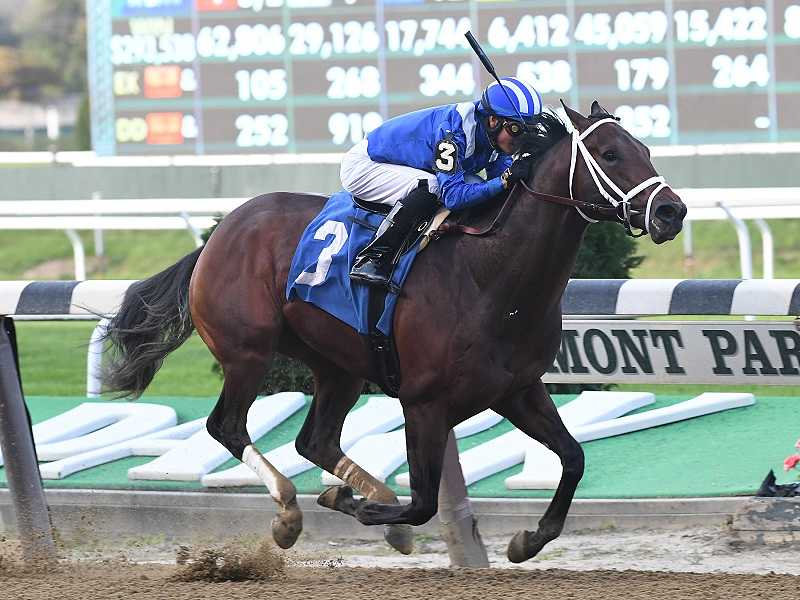 ELMONT, N.Y. - Shadwell Stable's homebred 3-year-old Takaful punched his ticket to the Grade 1, $1.5 million TwinSpires Breeders' Cup Sprint on November 4 at Del Mar with a one-length victory over 6-5 favorite El Deal in the Grade 1, $350,000 Vosburgh for sprinters 3-years-old and up to kick off Saturday's stakes action on Joe Hirsch Turf Classic Day at Belmont Park.

El Deal broke alertly as expected with Hall of Famer Javier Castellano aboard and raced through the opening quarter-mile in 22.31 seconds while Takaful took up position a length behind in second with fellow sophomore Mr. Crow in tow another two lengths back. El Deal had little time to breathe easy, however, as Takaful and jockey Jose Ortiz took the fight to the Grade 1 Alfred G. Vanderbilt winner early.

El Deal covered a swift half-mile in 44.76 and five furlongs in 56.88, dogged by Takaful a half-length behind. Angled three wide into the stretch by Ortiz, Takaful hooked onto the leader and got up in the final strides to complete the six-furlong dash in 1:09.69 to give trainer Kiaran McLaughlin his second win of the day.

Stallwalkin' Dude made a surging bid down the lane but had to settle for third, a half-length behind El Deal. Celtic Chaos, also trained by McLaughlin, was another 9 ¼ lengths back in fourth. Weekend Hideaway, Mr. Crow, and Green Gratto completed the order of finish.

Exiting a game runner-up finish to Practical Joke in the seven-furlong Grade 1 H. Allen Jerkens for 3-year-olds on August 26 at Saratoga, Takaful faced older rivals for the first time in the Vosburgh.

"I really like my horse," said Ortiz. "I think last time was a little too far. When we entered the stretch, I knew Javier had horse but was not getting away from me, so I knew from the eighth pole it was going to be a horse race. He really dug in around the sixteenth pole when I switched the stick to the left hand. I hit him and he really dug in and got the victory.

"It was great winning this race for good connections, for Kiaran and all the team," he added. "They're really nice people and I'm happy to win for them. He's a special horse. Everybody loves him. He's really hard to work with but when you win this kind of race, it makes it all worth it."

Saturday's win was the Bernardini colt's second in two tries at six furlongs, and third lifetime win from seven starts. Takaful was Grade 2-placed as a 2-year-old with a third-place finish in the Remsen last November, but finished off-the-board in a pair of two-turn Kentucky Derby prep races in early 2017. Following an eighth-place finish in the Grade 2 Fountain of Youth, Takaful returned from a 3 ½-month layoff on August 21 at Saratoga to register a 5 ¼-length gate-to-wire win in a six-furlong allowance.

"He's a special horse and I'm so happy to win a Grade 1 for Sheikh Hamdan bin Rashai Al Maktoum who's the owner and Rick Nichols and all of Shadwell," said McLaughlin, who also saddled Avery Island to an impressive maiden victory in Race 3.

"They've been patient, we tried to go the Derby route and it didn't work and they let us just get him right," he continued. "[Assistant] Joe Lee and his team here at Belmont have done a great job. He's a difficult horse in the mornings but a fun horse too when you end up in the winner's circle. Jose rode a great race. It gives us confidence that he was successfully able to stalk."