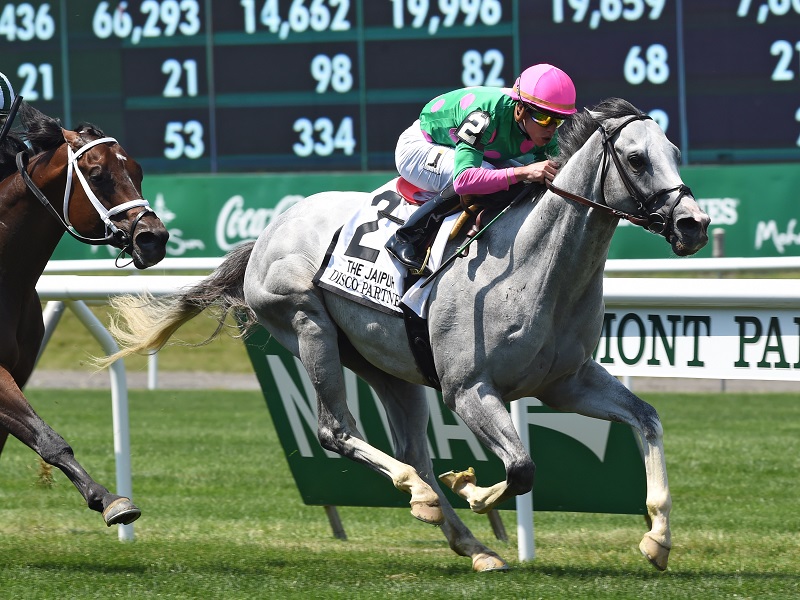 The 5-year-old by Disco Rico hit the wire in 1:05.67, a new course and North American record, besting the previous one set by stablemate Pure Sensation in last year's Jaipur. That effort came after a hard-closing Disco Partner, then saddled by trainer James Ryerson, missed the front-running Pure Sensation by a neck despite an eight-wide journey timed in 1:06.76.

This year, both ran for trainer Christophe Clement after Disco Partner was transferred to the Frenchman's barn in October. The duo gave Clement a tough one-two punch to be reckoned with, and didn't fail to make the running difficult for the eight others entered.

"Disco Partner had a great trip," Clement said. "Irad [Ortiz, Jr.] had him placed in a good position and he was able to take advantage and move forward to finish in the end. Irad has been riding great and he did a good job again here today.

"Pure Sensation went a notch quicker than I like, because he was very comfortable in front. [Julien] Leparoux [aboard No. 1 Loose On the Town] challenged him which took its toll on him but saying that, he opened up away again at the quarter-pole, he just paid for it again at the last sixteenth of quarter-pole."

Pure Sensation, a 6-year-old gelding by Zensational, set blazing fractions of 21.43 and 43.04 seconds after bumping with his stablemate leaving the gate. Loose On the Town and Stormy Liberal kept pressure through the half, but began to sputter as Pure Sensation and Jose Ortiz clocked five-eighths of a mile in 54.35.  Disco Partner, under a ground saving ride by Ortiz Jr., worked out an inside trip behind his stablemate, and surged to the lead at the sixteenth pole. Green Mask also rallied from off the quick pace along with Holding Gold, but both fell short at the wire, finishing second and third, respectively, while Pure Sensation tired to fourth.

Disco Partner's victory was due in part to a heady ride given by Ortiz Jr. aboard for the third time after winning the $150,000 Elusive Quality aboard the Clement trainee on April 25.

"I saved all the ground and when I had horse, I got through," Ortiz Jr. said. "We split horses and he got there. He's a nice horse. He's doing so well."