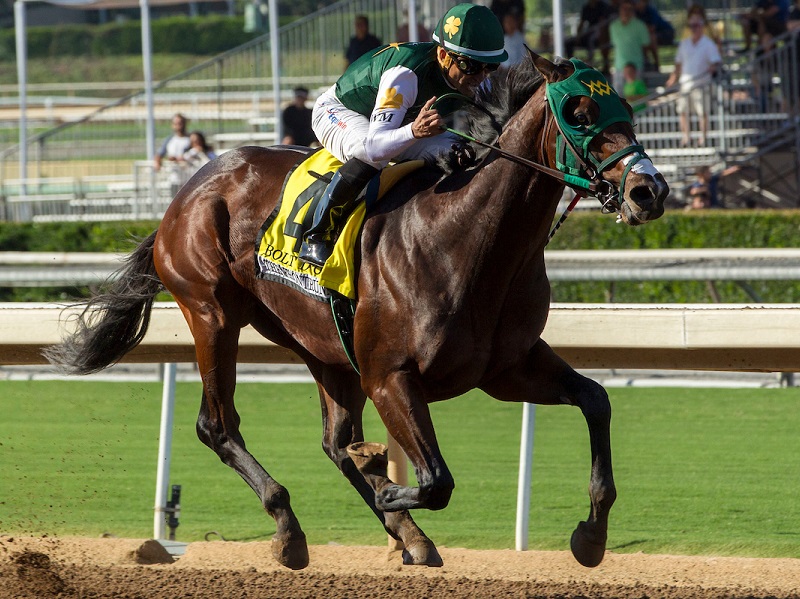 ARCADIA, Calif. (Sept. 30, 2017) – Corey Nakatani might finally have himself a Kentucky Derby winner and owner/trainer Mick Ruis appears to have struck gold as they teamed for victory in Saturday’s Grade I, $300,000 FrontRunner Stakes at Santa Anita with Bolt d’Oro.  A Kentucky-bred colt by Medaglia d’Oro, he steamed to a 7 ¾ lengths win while getting a mile and a sixteenth in 1:43.54–which was more than three seconds faster than undefeated 2-year-old filly Moonshine Memories, who took the Grade I Chandelier Stakes one race earlier.

Fresh off victory going seven furlongs in the Grade I Del Mar Futurity Sept. 4, Bolt d’Oro settled nicely in second position going into the Club House turn and pulled Nakatani alongside pacesetter Take the One O One approaching the quarter pole and opened up through the lane like a colt with a limitless future.

Ridden by Flavien Prat and trained by Bob Baffert, Solomini proved second best, finishing 2 ½ lengths in front of Take the One O One.  Off at 3-1, Solomini paid $3.80 and $3.00.