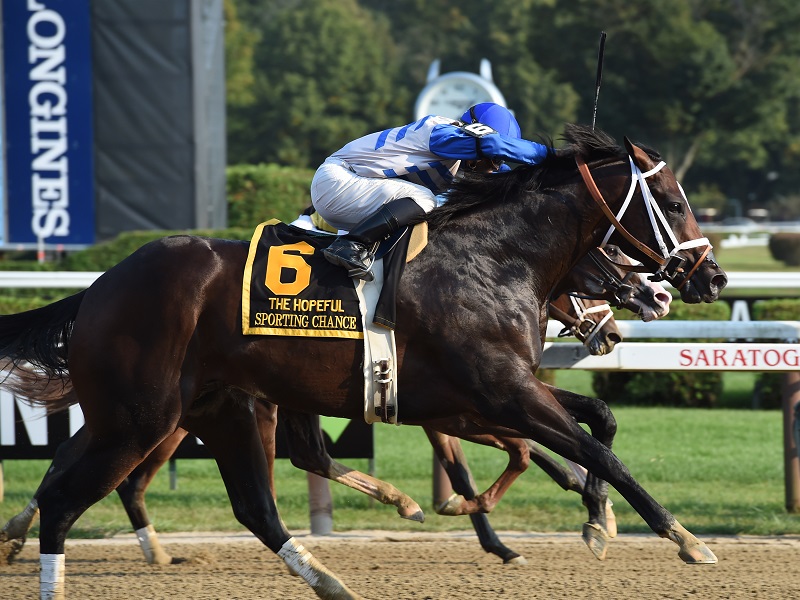 SARATOGA SPRINGS, N.Y. - An incredible 2017 Saratoga season capped off with the Grade 1, $350,000 Hopeful, which saw an impressive and erratic Sporting Chance end the meet on a high note, winning by a neck in 1:23.71 for the seven furlongs under jockey Luis Saez. The son of Tiznow became the 18th Grade 1 winner of the 40-day meet, and gave Hall of Fame trainer D. Wayne Lukas his eighth victory in the history of the 113-year-old race.

Sporting Chance gave bettors and his connections cause for concern in the final strides when he bolted towards the outside sweeping across the late-charging runner-up Free Drop Billy before the wire. A strong check to stay in the saddle by Saez secured the victory, but an inquiry and objection launched by the rider of the second-place finisher Robby Albarado was disallowed before the result stood.

"He didn't disappoint me at all," Lukas said. "I thought he ran even better than I expected. I expected him to run a strong race. I would've liked to have seen it without incident. You want everything to go smooth. I don't think it diminished his quality any, I think we'll move forward from this. Stuff like this is very correctable.

"I thought he was comfortable in front and he was moving well," he added. "I think he was best in the last 50 yards where he accelerated that's his style. Unfortunately, he saw something [at the finish], I guess Luis explained that he ducked from the whip I'm not sure. I have a tendency to think it might have been something else you never know. These are 2-year-olds and he's just in his third race so you can see things happen like that every day in 2-year-old races."

The son of Tiznow sat an early stalking trip while pace-setter National Flag took the field of eight through the quarter-mile in 22.50 seconds and the half in 45.92. The pair was followed closely at that point by Firenze Fire and Psychoanalyze as Free Drop Billy, Givemeaminit, Mojovation and Oskar Blues followed in pursuit.

Approaching the top of the stretch Saez and Sporting Chance took the lead as National Flag began to tire. Free Drop Willy, last from the break, made his move five wide turning for home as Givemeaminit, who was also called on for a run did so from a ground saving trip from the two path after three quarters of a mile were run in 1:10.30.

In the last 100 yards from the wire, it was a four-horse race, but Firenze Fire would finish four lengths out while Givemeaminit determined on the inside closed well, but missed by a head to Free Drop Billy who came hard for second. The son of Union Rags was thought to have been impeded in the final jumps, and his trainer Dale Romans was hoping for a reversal in the order of finish.

"You can't tell [for] a 2-year-old who has run three times in his life and the horse bolts in front of him, how much it stops his momentum,' Romans said. "If they all stayed straight, he may run right past him [Sporting Chance, No. 6]. You don't know what it does to a horse's mind. He got beat [by] a head by a horse who bolted in front of him. It's a ridiculous call."

"I don't think the other seven helped us today though. I think those seven are on their own merit. Today, we had to do it with this one," said Lukas. "I've done it for [owners Mr. Robert] Baker and [Mr. William] Mack. I think they've won the last three. Strong Mandate [2013] and Dublin [2015] they're on a mini roll themselves. They've been great. They've been loyal been with us 27 years. They buy two horses a year and they let me pick them out and they've been great signing the ticket. We've been great buying two a year."

The Breeders' Cup Juvenile, usually the next start on the path to the sophomore season is not a guarantee for the Robert C. Baker and William L. Mack owned colt. Lukas may take another approach en route to his 3-year-old season.

"I'm going to get together with the [owners], my first blush reaction is to maybe get a two-turn race. I might try to go straight to the Breeders' Cup Juvenile but I'm not real fond of Del Mar. I know that sounds crazy but I'm going to weigh all our chances. Another logical spot would be the Breeders' Futurity at Keeneland and go two-turns, another Grade 1. There's all kinds of options now."