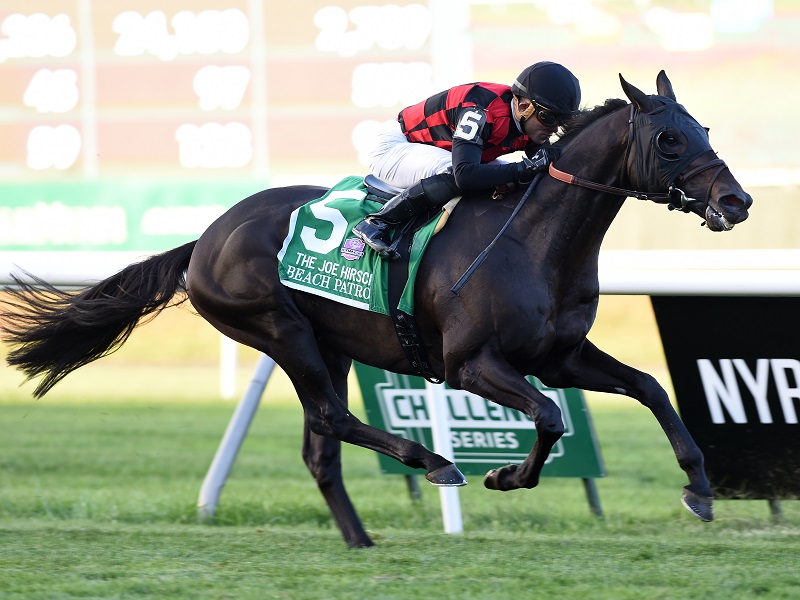 ELMONT, N.Y. -  Beach Patrol punched his ticket to the Breeders' Cup in emphatic fashion, steadying away from a talented field in the stretch to capture the 41st running of the Grade 1, $500,000 Joe Hirsch Turf Classic by five lengths in finale of Saturday's card at Belmont Park.

Beach Patrol stayed off 147-1 shot Converge's early fractions of 23.51 seconds for a quarter-mile, with the half going in 48.23. Jockey Joel Rosario, who guided Beach Patrol to a half-length victory in the Grade 1 Arlington Million last out on August 12, urged his charge to the lead near the top of the stretch and outkicked a charging Oscar Performance along the rail and stablemate Fanciful Angel to finish in the money for the ninth time in 10 starts.

"It was [an impressive turn of foot]. He just keep moving forward and then turning for home. I could see he wasn't going to quit on you," Rosario said. "He gives you everything he has. When I went to let him know it's time to go and he accelerated himself. It was a really good performance.

"The horse in front [Converge] backed up to me and I wasn't asking him to do too much, I was just keeping my spot," he added. "I didn't want to ask him to do too much at that point. I knew when I asked, he'd give it to me. I was very comfortable turning for home."

Beach Patrol went the last quarter-mile in 22.85 on turf listed as firm. The Chad Brown trainee is 2-3-1 in his last seven starts, all against Grade 1 competition.

"This horse has really gotten some unfavorable trips early in the year," Brown said. "He really is one of the most consistent horses I've had in training. He was very unlucky in some spots and Joel has fit him very well. He's gotten to know this horse, in particular in his last two starts. He's really found some good chemistry with Joel."

"He handled a little cut in the ground today from some of the rain we had, but he's not a horse that's ever shown me that he needs it," Brown added. "If anything, he's a firm-ground horse so I'm not too worried about how he'll handle the track out there. I'd be more concerned about the competition [in the Breeders' Cup]. He's earned a place in the race for sure and he's formidable."

Brown, who saddled three horses in the race, finished 1-2, with Fanciful Angel defeating Oscar Performance by a nose. The Irish-bred, who was second in his North American debut in the Arlington Million, was making his first start since Brown took over training duties.

"Fanciful Angel has never been at a mile and half, his form to get up for second we haven't had a lot of time with that horse, I feel like when we do we might see some more improvement with him," Brown said.

Oscar Performance finished in the money in his first race against older horses. The son of Kitten's Joy entered with a three-race winning streak, finding the winner's circle in the Grade 1 Secretariat, the Grade 1 Belmont Derby and the Grade 3 Pennine Ridge for trainer Brian Lynch. Oscar Performance and Channel Maker were the only 3-year-olds in the 11-horse field.

"The whole concept of the race changes when you have the rabbit in there," Lynch said. "I was happy with his performance. Unfortunately, we didn't hang on for second, but we got beat by the 1-2 finishers in the Arlington Million. It probably wasn't the ideal scenario the way the race fell into play, but it is what it is and you got to play the cards that are dealt to you. Overall, I think he handled elders well, and he was just unlucky he didn't hang on for second."