Itsinthepost Gets Up to Win G2 John Henry Turf Champ 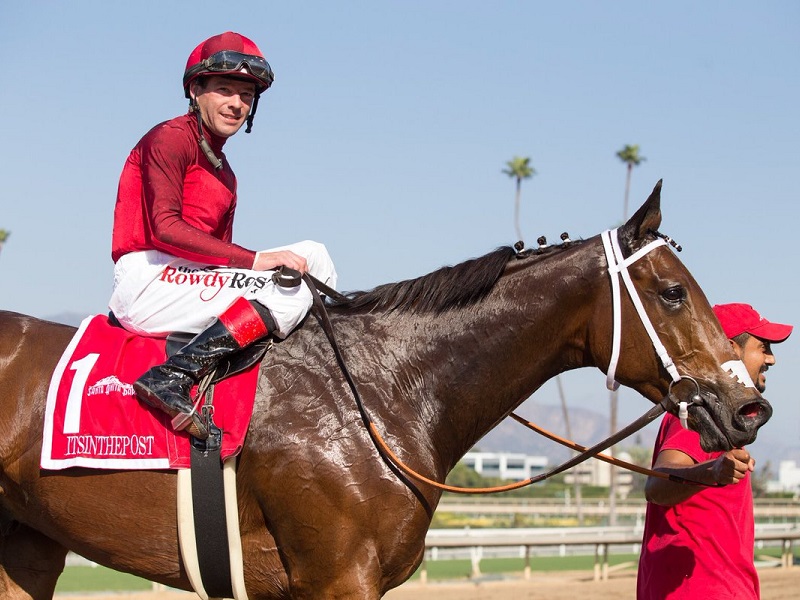 ARCADIA, Calif. (Oct. 1, 2017) – Unlucky to lose as the 5-2 favorite last time out, consistent Itsinthepost overhauled pacesetter Prime Attraction in the shadow of the wire to take Sunday’s Grade II, $200,000 John Henry Turf Championship at Santa Anita by a head. Trained by Jeff Mullins and owned by Jed Cohen’s Red Baron’s Barn, LLC, Itsinthepost got a mile and quarter on turf in 1:58.28.

With Prime Attraction, ridden by Victor Espinoza, dictating the pace through splits of 24.01, 48.31, 1:12.29 and 1:35.63, Baze angled off the rail a furlong out, caught a seam between the runner-up and Frank Conversation and gradually gained the advantage right on the money.

“I love this horse, I really do,” said Baze, who has ridden the 5-year-old gelding a total of 20 times, including his last 13 consecutive starts. “Jeff and I talked about this race and it came up pretty much the way we thought. He laid pretty close today and he still had a really good kick. Wherever he goes, I go.”

“This has been a very special horse for my family,” said Mark Cohen of Red Baron’s Barn. “Everybody at the barn loves him. He loves to train, he’s tough to pull up after his works and after his races…It seems like the only times he gets beat are when he gets a roadblock. We’re definitely going to talk about the Breeders’ Cup Turf (Grade I, 1 ½ miles on Nov. 4).”

Trained by James Cassidy, Prime Attraction proved his close fourth place finish in the Del Mar Handicap at odds of 95-1 was no fluke, as he stayed determinedly to finish second, 2 ½ lengths in front of Frank Conversation.

Ridden by Mario Gutierrez, Frank Conversation sat second virtually the entire trip but had to settle for third money, finishing a neck in front of Inordinate. Off at 8-1, “Frank” paid $5.00 to show.

Racing resumes with a five-day week on Thursday at Santa Anita. First post time is a 1 p.m. and admission gates open at 11 a.m.