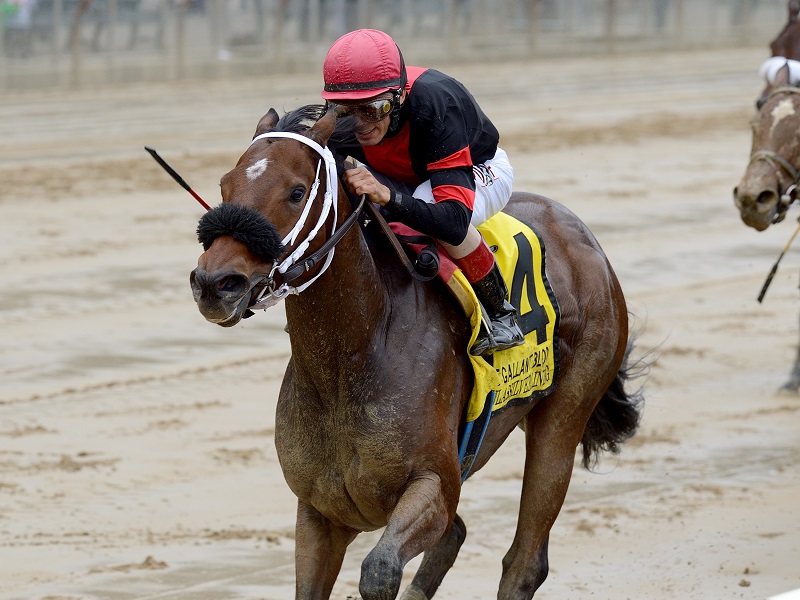 SARATOGA SPRINGS, N.Y. - The Grade 2, $200,000 Honorable Miss featured three mares with graded stakes win streaks who lived up to their resumes with Juddmonte Farm's Paulassilverlining dueling Finley'sluckycharm in deep stretch before winning by a neck on Wednesday at Saratoga Race Course.

Finely'sluckycharm set the early fractions for the five-horse field, going a quarter-mile in 22.69 seconds with the half 45.46. Disco Chick and Paulassilverlining sat off the pace before jockey Jose Ortiz made a late bid and overtaking Finley'sluckycharm in the final jumps, hitting the wire in 1:10.10 for six furlongs on the fast main track.

"I was hoping [Disco Chick] would go. After the last race she had in Monmouth she was laying back. I was hoping to engage them early, and I saw the rider taking back, so I had to go out and put pressure early," said Jose Ortiz. "I called my filly to run hard before the quarter pole, and Brian [Hernandez, Jr. aboard Finley'sluckycharm] was waiting, he tried to come back on me, but my filly has a lot of heart."

"Probably I would've won anyway, but I didn't want [Finley'sluckycharm] to get big on the lead, she was going easy enough for him, and I didn't want them to get comfortable in there," Ortiz added.

Carrying the 124-pound highweight, Paulassilverlining won her second career start at the Spa after finishing fifth in the 2016 Grade 1 Ballerina.

"She was giving the other filly some weight and she was a real quality horse [Finley'sluckycharm]. Our filly won two Grade 1s in a row and she didn't even go off favored. I thought the leader got away with a real soft opening quarter. For this caliber of race, [it was] not that fast and 'Paula' was able to wear her down. It was a great stretch duel. I'm glad we were able to come out on top," Brown added.

Paulassilverlining has now three straight stakes this year - all by a neck - since moving into trainer Chad Brown's barn. Her first two wins were against Grade 1 competition, including the Humana Distaff on May 6 at Churchill Downs and the Madison on April 8 at Keeneland.

"Jose knows her so well, I really didn't give him any instructions. He timed it just right. She has a lot of heart. [Since] arriving in our barn, she's done nothing wrong," said Paulassilverlining trainer Chad Brown. "She's been a real pleasant addition to our stable: so competitive, a lot of heart, a lot of talent.

"This was a prep for the Ballerina," Brown said. "We gave her a freshening after the Humana at Churchill. Planning for her race here in the Honorable Miss and leading to the Ballerina that's our plan."