By the Moon Takes G1 Ballerina by a Head 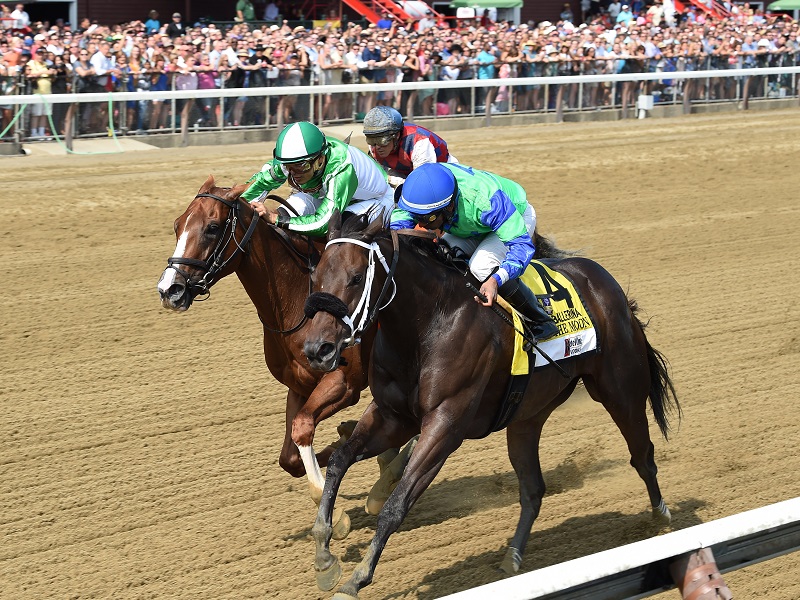 SARATOGA SPRINGS, N.Y. - Making up for a tough half-length runner-up effort in 2016, Jay Em Ess Stable's By the Moon was a smart gate-to-wire winner in the 2017 Grade 1 $500,000 Ketel One Ballerina Saturday at Saratoga Race Course for trainer Michelle Nevin.

Breaking well from post four in a field of seven fillies and mares, the daughter of Indian Charlie set surprisingly leisurely fractions under Rajiv Maragh of 24.05 and 47.81 seconds and 1:10.90 before holding off longtime pursuer Highway Star, under Angel Arroyo, by a head at the wire in a time of 1:22.97 for seven furlongs over a fast main track.

The dark bay 5-year-old Kentucky homebred earned her third graded victory on the season, added $300,000 to increase her career bankroll to $1,577,940 and earned an all-fees-paid berth in November's Grade 1 Breeders' Cup Filly & Mare Sprint at Del Mar, through its 'Win and You're In' Challenge program. Sent off at 5-1, she returned $13 on a $2 win bet and improved her record to seven wins from 19 starts.

"The race kind of looked like there wasn't a true clear-cut speed horse," Maragh said. "My filly has been better off stalking a horse in the past, but we thought that if we were going to get an easy lead we shouldn't give that up. No one really wanted to get in the lead so we tried to take advantage of that. It was a very moderate pace for this kind of race at this distance so I was really happy with it.

"All the way down the backstretch I was really comfortable where I was," he added. "I took a peek to my outside and saw that Highway Star was outside of me, so I definitely knew we were going slow because she doesn't have that much speed, so it made me feel really happy about where I was. I just wanted to be patient and not move until I had to, and down the stretch when I saw that they started coming at me and when I asked her she just gave me that kick that she has and she did the rest from there."

Nevin praised both the preparation and execution of Maragh, who earned his fifth graded stakes win this year and first Grade 1 since the 2014 Joe Hirsch Turf Classic at Belmont Park.

"It looked like there wasn't a ton of speed in here," she said. "Rajiv had talked about it yesterday and this morning that he wanted to be prepared right out of the gate to see what kind of scenario was going to unfold. Oh my God, did he give her a great ride. This was a wide-open race with some very good fillies and I think just tactics and an excellent ride won the race. Awesome job."

New York-bred Highway Star, making her first start since finishing third behind champion Songbird in the Grade 1 Ogden Phipps June 10, was a length ahead of Carina Mia for second.

"I felt she ran good," Arroyo said of the runner-up. "I was praying for the win, but [By the Moon] ran very well."

"Paulassilverlining just didn't fire today, which is not like her," trainer Chad Brown said. "Prior to this, she's won every race for us and showed up, so I'm not sure. We'll have to reevaluate her. Carina Mia got compromised by an extremely slow pace going seven [furlongs]. I thought she ran terrific, but it just didn't set up for her."