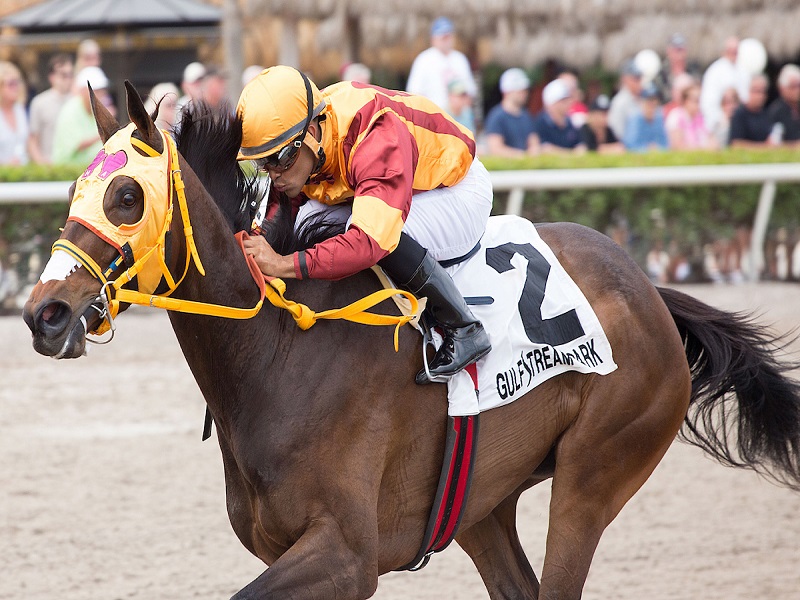 The Princess Rooney was a designated Breeders’ Cup ‘Win and You’re In’ race, as was the $250,000 Smile Sprint (G3), on Saturday’s Summit of Speed program that offered seven stakes (three graded) worth a total of $1 million in purses.

While running seven furlongs in 1:21.68 Curlin’s Approval ($11) recaptured the form she employed to win the Hurricane Bertie (G3) and the Royal Delta (G2) during Gulfstream Park’s Championship Meet.

The 4-year-old filly, who had turned in subpar showings in the Inside Information (G2) at Gulfstream and the Matron (G3) at Churchill Downs in her two most recent starts, was sharp Saturday, pressing the pace set by Kinsley Kissed into the turn into the homestretch before drawing away from the field under jockey Luis Saez.

Making her first start since winning the Inside Information March 18, Distinta stalked the pace before closing for a distant second-place finish, a half-length ahead of a late-running Lightstream, the 3-2 favorite.

Co-owner and breeder Happy Alter (Curlin’s Approval): “She made us proud, like she has in her other graded stakes. We put the speed back in her with the [work] in 57 and change. We wanted her to go about 59 but she’s such a special filly that she went faster than the designed time, but it didn’t hurt her. Then she blew out in 35 for the race and just has been showing all the class a filly could show. We’re proud of her. It’s nice to win here, in front of people that we know. I know they’ll be rooting for us when we go to the Breeders’ Cup, too.”

“Some people thought she might have been off form, but I thought she needed freshening without sending her out. We freshened her with light training here. If you look back for this race from her last race, it was almost a month for a breeze. We had all that rain and I didn’t want to risk her even galloping some days, so we were able to catch up with the three sharp breezes and her heart led us here.”

Jockey Luis Saez (Curlin’s Approval): “She had a very good trip. We were right there. I know [Kinsley Kisses] had speed so the plan was to break and be right there and see what happens. When we came to the stretch she gave me everything.”