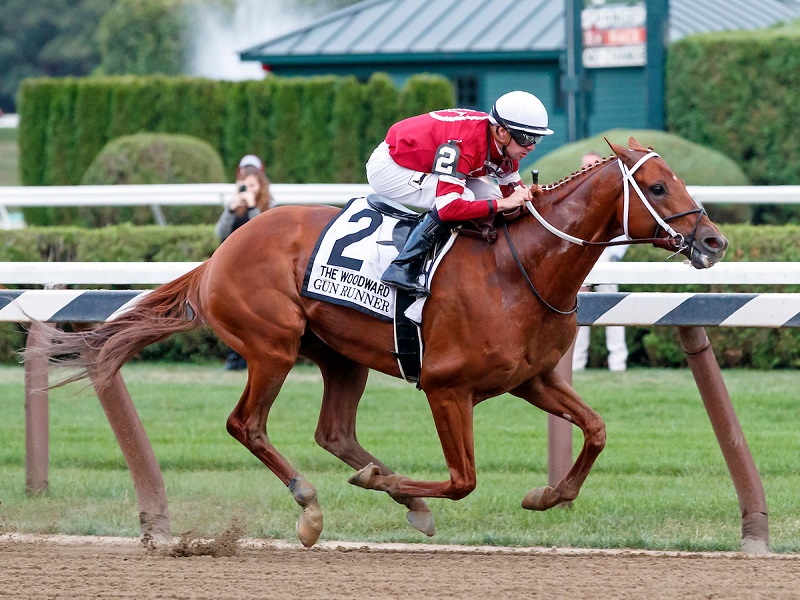 SARATOGA SPRINGS, N.Y. - Gun Runner, the 5 ¼-length Grade 1 Whitney winner went postward with a target on his back in the Grade 1, $750,000 Woodward. The 4-year-old son of Candy Ride accepted the challenge and, under rider Florent Geroux, answered by opening up through the stretch to win by 10 ¼ lengths in 1:47.43 for the 1 1/8 miles on Saturday at Saratoga Race Course.

The pace scenario had been the main topic leading up to the race. As history has shown, over planning and trying to outsmart competition can cost a horse a victory, but for trainer Steve Asmussen and his connections, the plan was to leave it all on the racetrack. As Arrogate, a four-time Grade 1 winner and last year's 3-year-old Male Champion has failed to win his last two starts, Gun Runner has progressed with each effort, and the Breeders' Cup Classic will, with all hope, be a showdown between the two.

"He stepped up. He was carrying everybody, all of us under these circumstances," said Asmussen. "We all know what's happened over the past couple of weeks. This was our last race heading into the Breeders' Cup and I thought it went as well as we could have hoped. If we can get out to California in good shape we'll hope to finish off the year.

"He increased his margin to the wire and proved his worth," he added. "The game plan was to leave him in Florent's hands. We worked him off many a horse in the mornings, knowing that he's very comfortable in that position, but with Todd having two talented horses in there, you did expect him to send one. It was expected and Gun Runner handled it like he's supposed to and, with his experience at this level, proved dominant."

Sent off by the betting public at odds of 1-5, Gun Runner was headed by Neolithic soon after the start as jockey Jose Ortiz sent him along the rail to open up by two lengths while Rally Cry, the other entry for trainer Todd Pletcher's barn, bookended Gun Runner through the early stages. Discreet Lover chased the pace along the rail as War Story sat to his outside with just five lengths separating the field down the backside.

The field of five ran in number order through a quarter-mile in a quick 23.20 seconds and a half-mile in 46.56 as Neolithic still held his two-length advantage over Gun Runner. Approaching the three-quarter mark, Geroux began to let the Winchell Thoroughbreds color bearer roll, and was now just a length as Rally Cry and the trailing duo were asked for run with 1:10.45 now spent during the running.

At the top of the stretch, Gun Runner was in control, and while Geroux drew the whip lefthanded, but never used it, opting to peer at the infield video board instead as the advantage grew. Rally Cry was 10 ¼ lengths behind as the runner-up under the wire while Neolithic held on for third. War Story and Discreet Lover completed the order of finish.

"I kind of expected one of them [the two entries by Pletcher] to go, I didn't know which one," Geroux said. "My horse broke so sharp I could pretty much do anything I wanted with him, he broke beautifully and from there when he starts leading on his left foot he is very strong. From the three-eighths pole I just knew it was a matter of how many lengths I am going to win. I was just hanging on. That is it.

"That was better than the Whitney," he continued. "Stronger. Faster. Overall, he is just getting better and that was four weeks and he is doing good on the track. And I don't think he is 100 percent cranked up yet. I really do think he has another step forward with him.

Gun Runner's Woodward is his third win in a row, and the fourth Grade 1 victory in 17 career starts. The next step will be to ship west, and start in the Breeders' Cup on November 4. The $450,000 winner's share of the Woodward purse improved his lifetime earnings to $5,738,500.

"I think everything culminates with the Breeders' Cup Classic," Asmussen noted. "That is why he is in training this year and that has been the goal and continues to be the goal. We will do our best to get him there in as good a shape as possible. If we are fortunate to have success there everything else will take care of itself."