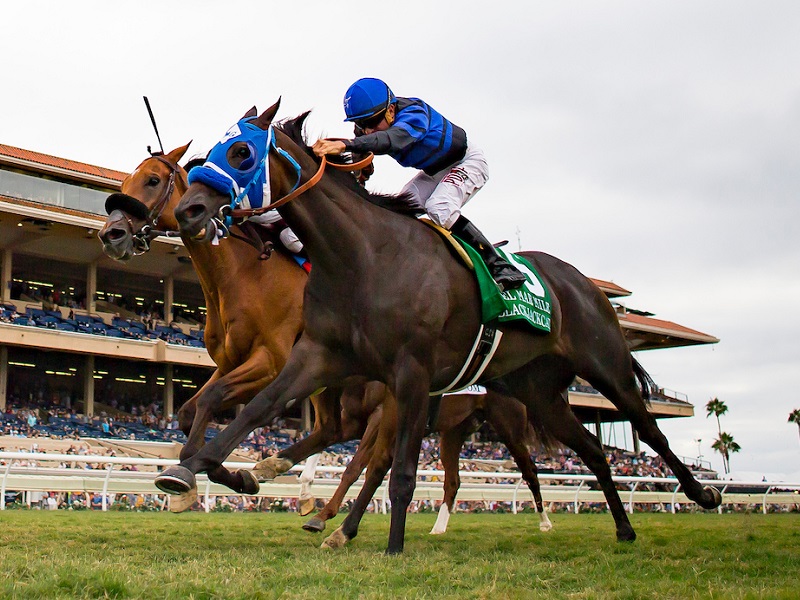 Blackjackcat, winner of the restricted Wickerr Stakes a month ago, wore down pacesetting Midnight Storm, the 2-1 favorite, to take command in midstretch and then was severely tested to the wire by Vyjack, ultimately winning by a diminishing head. Leading rider Flavien Prat was aboard Vyjack.

Om and Gary Stevens were third, a length behind Vyjack and a half-length in front of fourth-place Midnight Storm, the 2016 winner of the Del Mar Mile. Completing the line-up were Le Ken and Bal a Bali, the latter a disappointing sixth and last.

Del Mar’s stewards conducted an inquiry into the stretch run concerning a bumping between Vyjack and Om, but ruled the incident did not warrant a change of placings.

There were no perfect tickets in Sunday’s Pick Six so Wednesday’s card will feature a carryover of $147,012. Post time for the first race is 2 p.m.

The stakes win was the second of the meet for rider Desormeaux, but his third in the Del Mar Mile. He now has 78 stakes wins at Del Mar, ninth-best all time.

The stakes wins was the third of the meet for conditioner Glatt, but his first in the Del Mar Mile. He now has five stakes wins at Del Mar.

Winning owners Al and Sandee Kirkwood are from Ridgefield, WA.

KENT DESORMEAUX (Blackjackcat, winner) – “I rode to my instructions. I was told to get into Midnight Storm’s jock and not get out. I did. He ran great.”

GARY STEVENS (Om, third) – “They (stewards) asked me (on phone after race) if I was going to be second (he finished third after a bumping incident in the stretch with second-place finisher Vyjack): I told them I can’t say I was, but I can’t say I wasn’t (going to be). He (Vyjack) came over and hit me; threw my horse off stride and made me hit the saddle. Enough is enough.”

RAFAEL BEJARANO (Midnight Storm, fourth) – “I think he was a little confused out there. He’s gone from dirt to grass and it seemed to take him some time to get his feet under him. But he ran well and he’ll be better next time.”

MARK GLATT (Blackjackcat, winner) – “We gave him a nice break after his 3-year-old campaign, got a couple races in him at Santa Anita and finally settled on his best distance, which seems to be a flat mile. Last year we were in contention to win some of the Derbies we tried, but at a mile and an eighth they were just a hair too far for him. With a little rest after that 3-year-old campaign he’s come back stronger and carries his weight better and he has proven me right.”