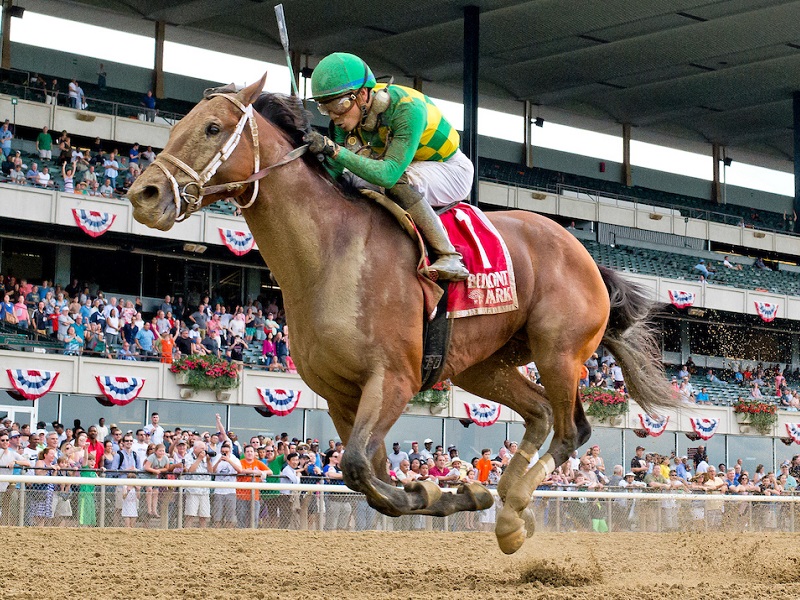 ELMONT, N.Y. - Trainer Todd Pletcher will send out a formidable trio on Saturday at Belmont Park to lead a field of seven looking to secure a spot in the Breeders' Cup Classic in the 99th running of the Grade 1, $750,000 Jockey Club Gold Cup for 3-year-olds and up at 1 ¼ miles.

This summer, the 5-year-old son of Curlin ended a 22-month dry spell with a three-length victory in the 1 ¼-mile Grade 2 Suburban on July 8 at Belmont, his first win since he upset Triple Crown champion American Pharoah in the 2015 Grade 1 Travers, also contested at the classic distance.

As a Breeders' Cup "Win and You're In" qualifier for the Grade 1, $6 million Classic on November 4 at Del Mar, a victory in the Jockey Club Gold Cup would send Keen Ice to his third consecutive Breeders' Cup Classic. He finished a distant fourth to American Pharoah in 2015 and, transferred to the Pletcher barn in mid-2016, was third behind Eclipse Award winners Arrogate and California Chrome in last year's Classic.

"We're looking forward to getting him back at a mile and a quarter," said Pletcher, who has finished second in the Jockey Club Gold Cup on five occasions and is still looking for his first win in the race. "He's been training well and we hope he can give us the same kind of effort he did in the Suburban."

Keen Ice, the expected morning line favorite, will be ridden by Jose Ortiz from the outside post.

Twin Creeks Racing and Eclipse Thoroughbred Partner's 2016 Belmont Stakes runner-up Destin will make his return to stakes competition in his third start of the year. The 4-year-old Giant's Causeway colt came back from a nine-month layoff to finish third against allowance company on May 28 and followed that up with a nose victory over stablemate Donegal Moon in an optional-claiming race on August 23 at the Spa.

"He's had two races off a long layoff and I thought his second race was a big improvement so we hope he continues moving in the right direction," Pletcher said. "The mile and a quarter should suit him well and he's seemed to run well at Belmont."

Luis Saez has the call on Destin. The pair will break from post 6.

Paul Pompa, Jr.'s Rally Cry will try 1 ¼ miles for the first time following a solid pair of efforts at 1 1/8 miles this summer at Saratoga. The 4-year-old colt by Uncle Mo received a personal-best 110 Beyer Speed Figure for his 8 ¾-length victory in the Alydar on August 6 and came back on closing weekend to finish second to Gun Runner in the Grade 1 Woodward on September 2.

"I thought he ran very well in the Alydar at a mile and an eighth and if he can reproduce that kind of race, I don't think the distance will be much of an issue," said Pletcher. "He seems like the kind of horse that, when he's able to get into a good rhythm, he's able to keep going."

Rally Cry will have the services of Hall of Famer John Velazquez, who has won the last two editions of the Jockey Club Gold Cup.

A pair of sophomores will face older rivals for the first time on Saturday, including Grade 2 Jim Dandy winner Good Samaritan. By Harlan's Holiday, Good Samaritan made the switch from turf to dirt a successful one at Saratoga, taking the Jim Dandy by 4 ¾ lengths on July 29 for Hall of Fame trainer Bill Mott.

Exiting a fifth-place finish in the Mid-Summer Derby on August 26, Good Samaritan will don blinkers for the first time when he breaks from post 3 with regular rider Joel Rosario aboard.

"He came out of the Travers in good order and he's been training well," said Mott. "He's had plenty of time and I guess sooner or later, he's got to meet his elders so Saturday is the day. Hopefully the blinkers will place him a little closer in the race. I don't think it's going to make a huge difference but maybe it'll put him a couple lengths closer, which would be great."

Good Samaritan will be joined by fellow 3-year-old Pavel, making his fourth career start for Reddam Racing and trainer Doug O'Neill. The lightly raced colt by Creative Cause is coming off a six-length victory in the Grade 3 Smarty Jones on September 4 at Parx, where he earned an impressive 103 Beyer.

Pavel will be ridden by Mario Gutierrez from post 4.