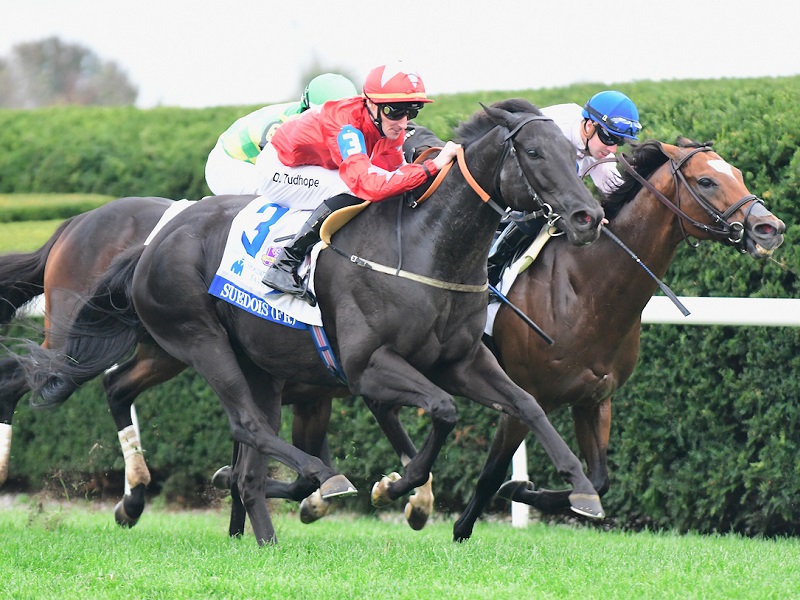 LEXINGTON, KY (Oct. 7, 2017) – George Turner and Clipper Logistics’ Suedois (FR) caught front-running Heart to Heart in deep stretch to prevail by a half-length and win the 32nd running of the $1 million Shadwell Turf Mile (G1) before a Saturday afternoon crowd of 28,763, the second- largest Fall Stars Saturday on record.

The day featured five graded stakes worth $2.35 million, including four Breeders’ Cup Challenge stakes in which winners earned an automatic berth in the Breeders’ Cup World Championships on Nov. 3-4 at Del Mar. On-track wagering of $1,770,894 was up 4.5 percent, while all-sources wagering of $13,866,571 was the third-highest Fall Meet single-day handle.

Trained by David O’Meara and ridden by Danny Tudhope, Shadwell Turf Mile winner Suedois earned a berth in the $2 million Breeders’ Cup Mile (G1) to be run Nov. 4 at Del Mar. He was one of four winners Saturday afternoon to secure trips to California.

Other Win and You’re In victors were Empyrean Stables’ Zipessa in the $400,000 First Lady (G1), Albaugh Family Stables’ Free Drop Billy in the $500,000 Claiborne Breeders’ Futurity (G1) for 2-year-olds and Carl R. Moore Management’s Finley’sluckycharm in the $250,000 Thoroughbred Club of America (G2).

Also securing a graded stakes win Saturday afternoon was Ironhorse Racing’s Bucchero who scored a 1¾-length victory in the $200,000 Woodford Presented by Keeneland Select (G2), rewarding his backers with a $55.20 win payoff.

In the Shadwell Turf Mile, Heart to Heart shot to the lead and led the field of 14 through fractions of :23.96, :48.17 while under pressure from longshot Applicator.

On the far turn, Heart to Heart shook off his early challengers only to be confronted by defending champion Miss Temple City and Ballagh Rocks with jockey Danny Tudhope swinging Suedois to the outside just behind Ballagh Rocks for clear running.

Heart to Heart dug in and repulsed all rivals until the final 50 yards when Suedois surged past to complete the mile on a firm turf course in 1:35.94.

“We’ve been here (in the U.S.) a couple of times before. We were here for the Breeders’ Cup with Mondialiste (IRE), who finished second (in the 2015 Mile-G1), and here in this race last year (when he) finished fourth. (Keeneland) puts on really good prize money. It was a toss-up over taking him to France for 7 (furlongs) or here for a mile. His previous start at a mile, he won it, and we were keen to keep him at the same distance.”

“We’ll chat with the owners and see what they want to do (about their earned spot in the Breeders’ Cup Mile).”

“I thought I had a nice position (toward the rear of the pack). He travels really well, and I didn’t want to get (to the front) too soon. He finished really strong. He handled the track really well. I was happy with the way it went.”

“You feel for the horse because he runs his eyeballs out every time, but you have to be humble and gallant in defeat as hard as he tries every time. If he had had a breather down the backside, he might have been able to finish better but that is racing. He is not Breeders’ Cup eligible and there is a big supplement fee so I don't think he will go. For sure he will come back to race next year.”

“There was pressure down the backside from Applicator going head to head with me. I wish he had not been there with me. If I had been able to slow him down a little (on the backside) maybe he could have won.”

“I had a very good trip. He broke very good – the way I wanted to break. When I asked him to run, he gave me everything he had. He gave me his race. He tried hard the whole way around.”

“We came from behind with a 14-horse field, but he made his run. No excuse. Just didn’t get there today.”

“She had a good trip. She broke OK and got outrun the first part so I was able to sit right behind the speed. She was going very comfortably and when I hit the three-eighths pole I had horse and I could look at the competition coming from behind. I was pretty comfortable where we were and I had a great feeling that she would be able to repeat (her victory in the race last year). At the top of the stretch, when I asked her, she really tried to go after the horse in front. The last three-eighths of a mile she just flew a little late. She got a good trip, but you’ve got to run the last part.”