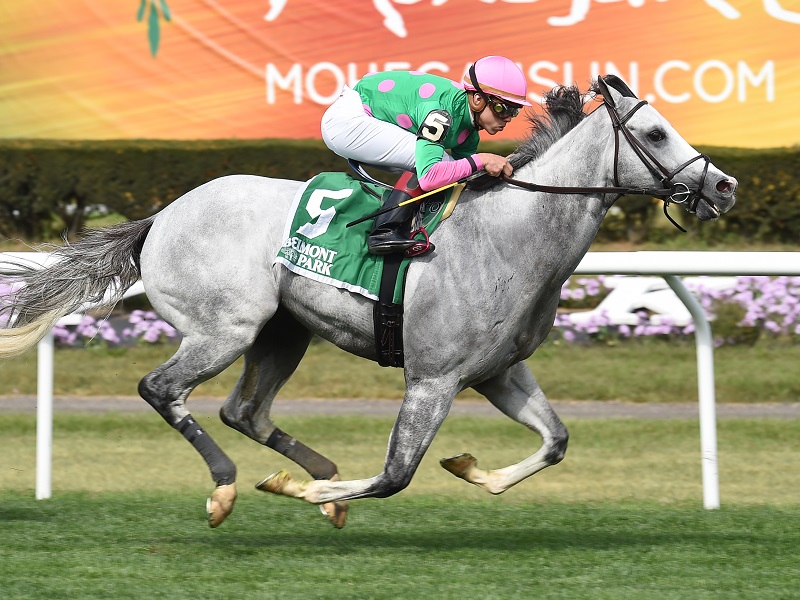 ELMONT, N.Y. - Making his first start at Belmont Park since breaking the world record for six furlongs on the Widener turf course at Belmont Park in the Grade 3 Jaipur, Patricia A. Generazio's Disco Partner was equally impressive Saturday on the inner turf course to win the $150,000 Belmont Turf Sprint Invitational.

Breaking from post 5 as the 1-5 post time favorite with Irad Ortiz, Jr. aboard, Disco Partner stalked comfortably in third position as Bold Thunder led the field of five through swift fractions with the opening quarter mile going in 22.06 seconds with the half in 44.59.

As the field turned for home, Ready for Rye, who was in aim of the leader in second, quickly grabbed the lead in the stretch before Disco Partner was shifted out three wide. Set down and in a drive, Disco Partner quickly made up ground surpassing the pair in front at the sixteenth-pole and going on to secure the victory by 1 ¼ lengths.

"I knew he was going to be there when I asked him so I just tried to wait as long as I can," said Ortiz. "He's a nice horse. He gives me a nice kick. He probably wasn't as fast today as he was on that day [in the Jaipur], but he is still a nice horse. I think he is one of the best sprinters around right now."

Returning $2.70 for a $2 win wager, Disco Partner earned his fourth stakes win of the year at Belmont following victories in the Elusive Quality, Jaipur, and Forbidden Apple. The win boosted his career earnings $823,810.

"He's 4-for-4 this year at Belmont, he's a top-class horse," said winning trainer Christophe Clement. "He's fast. Irad said he was always in control. He's a fine horse. He loves Belmont, he loves training here. It was like a morning workout for him. As a trainer, I don't [control] the time [fractions]. As long as he comes back safe, I'm very happy with it."

With the victory, Clement said a decision to potentially run next in the $1 Million Breeders' Cup Turf Sprint on Saturday, November 4 at Del Mar would be up to owners Mr. and Mrs. Generazio, where he could possibly join stablemate Pure Senstaion also owned by the same connections.

"I'm very lucky I have two top-class sprinters. We won the race at Parx with Pure Sensation and he [Disco Partner] wins here. So, they can make the decision on who goes to the Breeders' Cup. That'll be up to Mr. and Mrs. Generazio. It's a great problem to have. If they want, I'll take both of them. One has more natural speed [Pure Sensation], this one has the most amazing turn of foot. In three strides, he can just get there. Maybe it's a good team to run together."

Following Ready for Rye in third was Snowday, We Deer You and Bold Thunder.