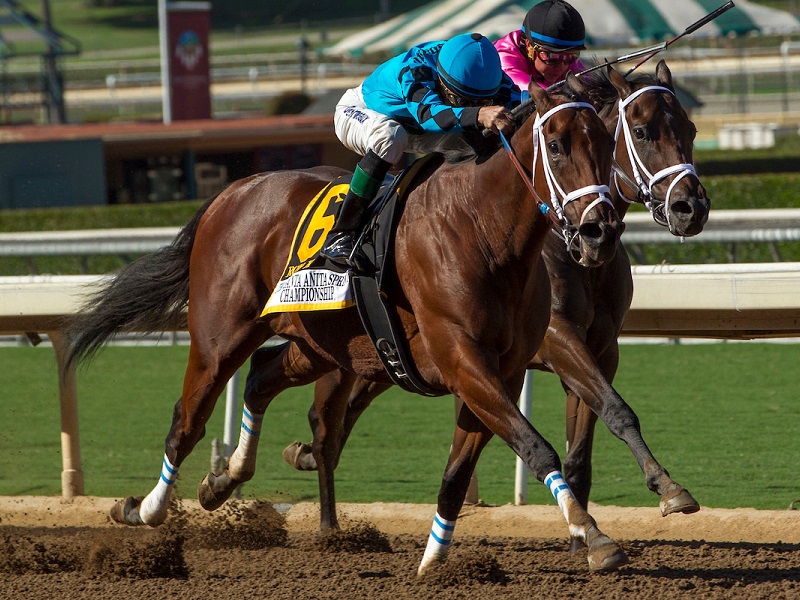 ARCADIA, Calif. (Oct. 7, 2017) — Wheeled three-wide turning for home under a confident Kent Desormeaux, favored Roy H went on to an impressive one length win in Saturday’s Grade I, $300,000 Santa Anita Sprint Championship. Owned by Gary Hartunian’s Rockingham Ranch and David Bernson, Roy H is conditioned by Peter Miller and got six furlongs in 1:08.68, thus stamping himself as a horse to be reckoned with in the Grade I Breeders’ Cup Sprint on Nov. 4.

“This was very rewarding,” said Miller, who sent Roy H out to a second place finish as the favorite in the Grade I Bing Crosby Stakes July 29. “We thought he was the best horse in the Bing Crosby. It was racing luck that day. I’ve had so many bad beats in my life and I’m just glad that today wasn’t another one of those…He’s always had this ability. As a younger horse he just never seemed to put it together…Hopefully we get to see this horse again in the Breeders’ Cup.”

“I’ve been looking forward to this day for some time,” said Desormeaux, who rode Roy H for the first time today. “He’s fast. He probably broke a half length behind the leaders and I had him in absolute reserve all the way...He was really full of run. He had been ‘touting’ himself in the mornings so I really couldn’t wait to ride him.”

A 5-year-old Kentucky-bred gelding by More Than Ready, Roy H notched his second stakes win and his fifth overall victory from 16 starts. With the winner’s share of $180,000, he increased his earnings to $534,765.

The longest shot in the field with Drayden Van Dyke at 41-1, Mr. Hinx proved second best, out-finishing American Anthem by 2 ¼ lengths for the place. Trained by Steve Miyadi, Mr. Hinx paid $17.40 and $5.80.

Third by 2 ¼ lengths with no apparent excuses on the early lead, American Anthem, ridden by Mike Smith, paid $2.80 to show.

KENT DESORMEAUX, ROY H, WINNER: "I’ve been looking forward to this day for some time. He’s been a special horse since the day I got to touch him. It was quite a handy ride today. He’s fast. He probably broke half a length behind the leaders and I had him in absolute reserve all the way.

“It was actually a very uneventful race. He broke smart and was the widest of all in a small field. He camped three wide in the cat-bird seat and I just waited to turn him loose. He was really full of run. He had been touting himself in the mornings so I really couldn’t wait to ride him.”

DRAYDEN VAN DYKE, MR. HINX, SECOND: “My horse ran really well. I thought we’d be on the lead, but American Anthem outbroke me, so we sat right off him and my horse was real comfortable. He gave me a nice kick there and we just got outrun by a quality horse.”

PETER MILLER, ROY H, WINNER: “This was very rewarding. We thought we were the best horse in the Bing Crosby (July 29 at Del Mar where Roy H ran second). It was racing luck that day. I’ve had so many bad beats in my life and I’m just glad that today wasn’t another one of those.

“I want to thank Gary Hartunian and his family, Rockingham Ranch for giving me this opportunity. My assistant Ruben Alvarado has done a super job with this horse. He’s had him here at Santa Anita since he won his first race and I’m a bit superstitious. When he won his first, then his second, then his third I thought we’d just leave him here with Ruben for a while. It’s worked out well.

“He always had this ability. As a colt, as a younger horse, he just never seemed to put it together. Once we gelded him and gave him some time off, he just blossomed into a different horse. He’s all business and just a very, very good horse.

“Hopefully we get to see this horse again in the Breeders’ Cup.

“I used to be superstitious but it was bad luck. As trainers we are somewhat superstitious. I’m a big believer in ‘if it ain’t broke, don’t fix it.’ All kidding aside, he’s done well here with Ruben. I train the horse. I send Ruben what to do and we talk and a daily basis and he gives me the rundown but he’s done really well this horse. He’s got him in great form and he likes this track. I didn’t want to take him to San Luis Rey after he’s been running so well and training so well out of here. We’ll send him to Del Mar with Ruben on the 23rd and if we get another performance like this, he’ll be right there.”