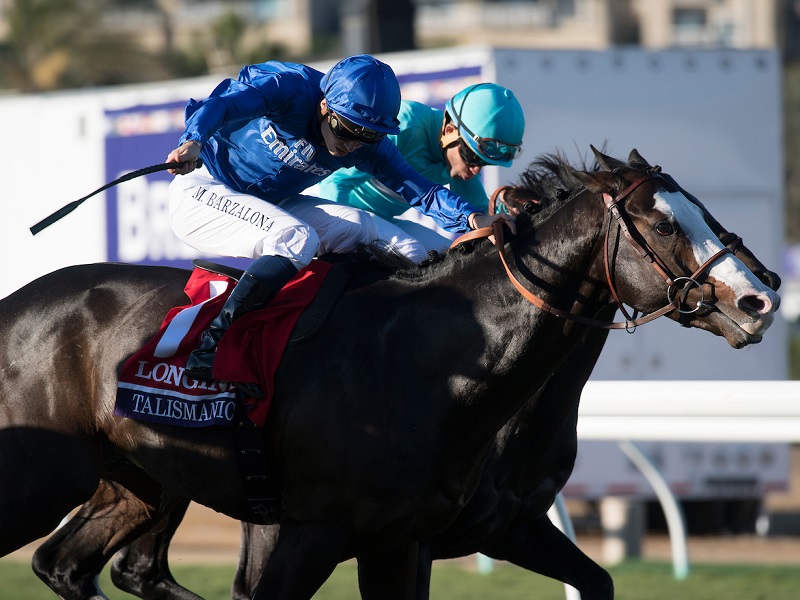 DEL MAR, Calif. (Nov. 4, 2017) – Godolphin’s Talismanic ($30.20) reached the front in deep stretch to prevail by a half-length over Beach Patrol with defending champion Highland Reel another neck back in third in the 34th running of the $4 million Longines Breeders’ Cup Turf (G1) for 3-year-olds and up Saturday afternoon at Del Mar racetrack.

Trained by Andre Fabre and ridden by Mickael Barzalona, Talismanic covered the 1 ½ miles on a firm turf course in a course-record 2:26.19.

Talismanic is a 4-year-old son of Medaglia d’Oro and was posting his first Grade 1 victory.

The victory for Barzalona came on his initial Breeders’ Cup mount. For Fabre, it was his fifth Breeders’ Cup victory and second in the Turf, having won with In the Wings at Belmont Park in 1990.

Oscar Performance, winner of last year’s Breeders’ Cup Juvenile Turf (G1), set the pace with Beach Patrol and Highland Reel tracking him all the way around with positions unchanged until upper stretch. There, Oscar Performance dropped back and Talismanic split horses to surge to the front.