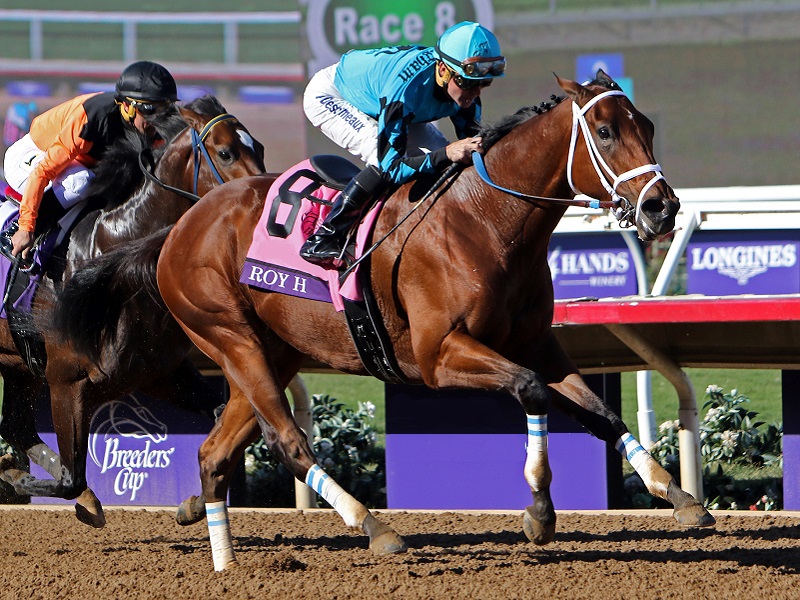 DEL MAR, Calif. (Nov. 4, 2017) – Rockingham Ranch and David Bernsen’s Roy H ($11.80) took over in deep stretch from Imperial Hint and went on to a one-length victory in the 34th running of the $1.5 million Breeders’ Cup Sprint (G1) for 3-year-olds and up Saturday afternoon at Del Mar racetrack.

Trained by Peter Miller and ridden by Kent Desormeax, Roy H covered the six furlongs on a fast main track in 1:08.61. It was the second victory of the day for Rockingham and Miller, who took the Breeders’ Cup Turf Sprint with Stormy Liberal.

Roy H is a 5-year-old Kentucky-bred son of More Than Ready and Saturday’s victory was his second consecutive Grade 1 triumph.

The victory was the sixth for Desormeaux in the Breeders’ Cup and second in the Sprint, a race he won in 1995 on Desert Stormer at Belmont Park.

Imperial Hint finished two lengths in front of late-closing Mind Your Biscuits. Defending champion and favorite Drefong was sixth in the field of 10.