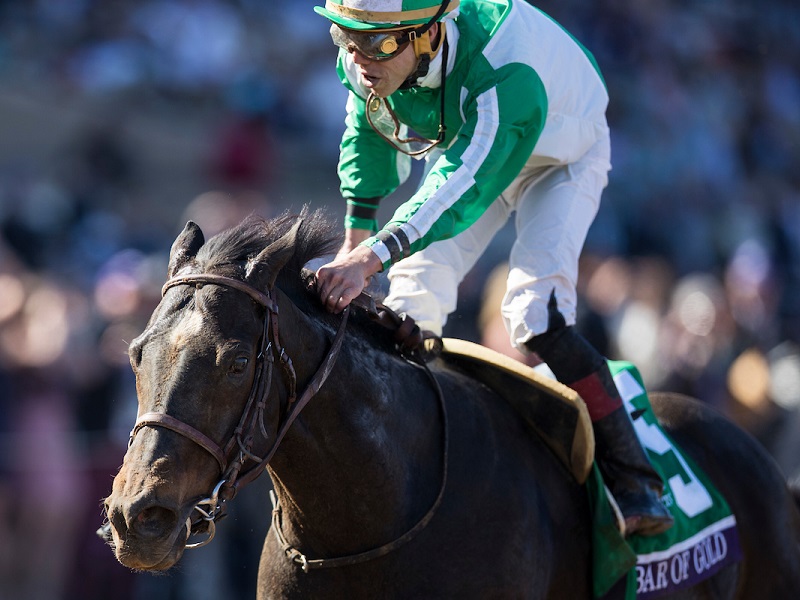 Winning trainer John Kimmel (Bar of Gold) – “We knew it was in there somewhere. She pulled it out at the right moment. She's brushed on greatness a few times, and she's gotten better as the years have gone on. Her last race (Juddmonte Spinster at Keeneland) was weird. At the track it had been raining all day and she really didn't break sharp and was wide. It was really just a throw-out. We were all confused about whether we were going to come out here, but then we got her back to New York (from Kentucky) and she had a couple of breezes that were really impressive. Irad (Ortiz, Jr.) said she felt great. I wouldn't have come out here if Irad couldn't ride the horse, so when he told me he was open, I said ‘Let's go. Let's give it a shot.’ She is getting to the end of her career and here we are. I've always liked horses cutting back in distance, especially in a sprint, and a seven-eighths sprint. I've won the Test a couple of times with that tactic. She showed up today, and Irad gave her a great, great trip.”

Winning jockey Irad Ortiz Jr. (Bar of Gold) – “I got a perfect trip. She broke good, put me in good position and I just saved her. She made a good run on the inside and when I took her to the outside, she responded pretty good.”

Second-place trainer Josie Carroll (Ami’s Mesa) – “I thought for a while that we were going to get it, but I could see that other horse coming. I just hoped she had enough left in the tank. She’s a gutsy filly. She fought that filly and just got out-nodded. This is a gutsy filly that gave it all and you can’t ask for more than that.”

Second-place jockey Luis Contreras (Ami’s Mesa) – “It was a really tough beat but she tried so hard. I just gave her a good trip. She was traveling perfect. She switched leads and I made my move. I tried to save as much as I could and she just got beat by a nose. That’s racing, right?”

Third-place jockey Javier Castellano (Carina Mia) – “She did everything right. She split horses. She ran hard. I just wish I had a better post. In the one hole you have to use a little bit to get a good spot, but she ran great.”

Jockey Mike Smith (beaten favorite Unique Bella, 7th) – “She went so quick early. I guess it was too much to ask (today). She never really folded though. If I could have done something different, maybe I would have taken back a little farther, but the game plan was to go. At the top of the stretch, I was done.”