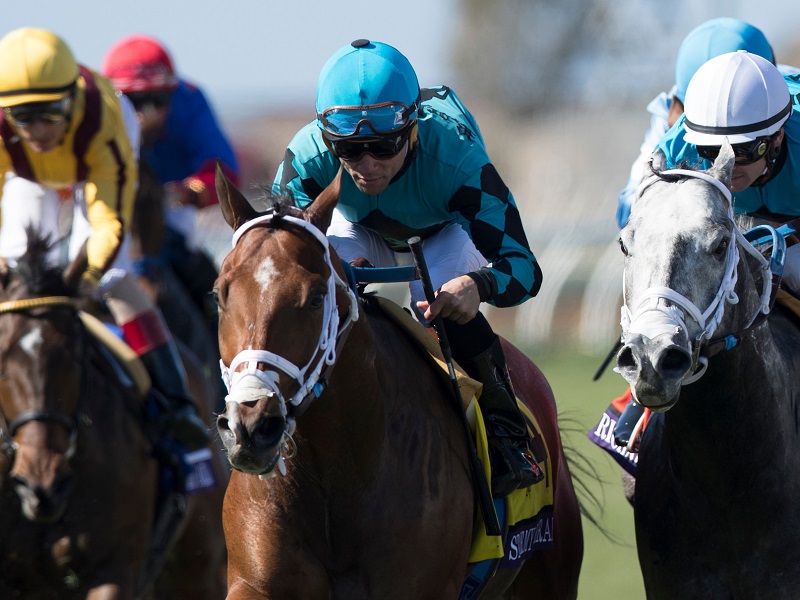 Winning and second-place trainer Peter Miller (Stormy Liberal and Richard’s Boy) – “I’m just elated to win a Breeders’ Cup at home. It’s just amazing. The first win I’ve ever had, I thought we had home court advantage and they ran to that. Richard’s Boy ran his butt off. I couldn’t be prouder of these horses. They’re just two gutsy, tough, hard-knocking horses.”

Winning jockey Joel Rosario (Stormy Liberal) – “He broke well. I asked him a little to get my spot. They were going very fast in front. But I listened to Peter. He said to stay inside and save some ground then make my run. I did that and it worked out perfect. He really was there for me. He did all the work.”

Second-place jockey Flavien Prat (Richard’s Boy) – “He ran a really good race. He just got beat by a neck.”

Third-place trainer Christophe Clement (Disco Partner) – “They both ran well (also finished fifth with Pure Sensation). I just wish they had run one-two, but that’s racing. I don’t know if the posts compromised them. I have to go back and watch the replay in a quiet place until I have an opinion. As long as they come back and safe to fight another day is the main thing.”

Third-place jockey Irad Ortiz Jr. (Disco Partner) – “I had a good trip. Five furlongs is just too short for him. Five and a half or six is better for him. He gave me a good kick.”

Jockey Oisin Murphy (Cotai Glory, ninth) – “He just didn’t handle the turn. He’s been around Chester at home, but this is much tighter. If he hadn’t lost so much ground on the turn, he would have been in the mix.”

Jockey John Velazquez (Lady Aurelia, 10th) – “I had a perfect trip. There were a couple speed horses so I let them go. I got into a spot I wanted at the 3/8pole and she was just flat down the lane.”