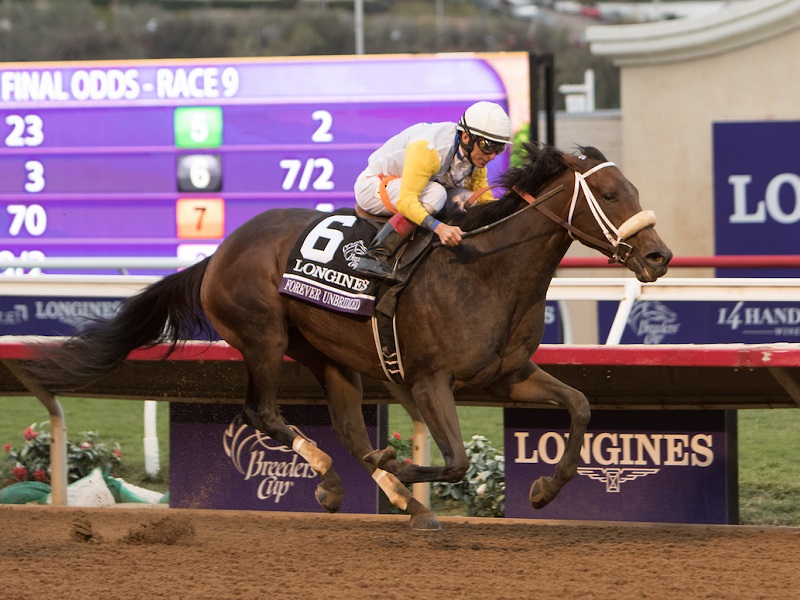 DEL MAR, Calif. (Nov. 3, 2017) – Charles Fipke’s homebred Forever Unbridled ($9.40) swept to the lead coming off the far turn and then held off a late bid from Abel Tasman by a half-length to win the 34th running of the $2 million Longines Breeders’ Cup Distaff (G1) for fillies and mares Friday afternoon at Del Mar racetrack to close out the opening day of the 34th Breeders’ Cup World Championships before a crowd of 32,278.

Trained by Dallas Stewart and ridden by John Velazquez, Forever Unbridled covered the 1 1/8 on a fast main track in 1:50.25.

Champagne Room shot out to an uncontested early lead with Paradise Woods in closest pursuit and Forever Unbridled sixth in the early going running in the clear on the outside.

Approaching the far turn, Velazquez had Forever Unbridled in high gear, quickly joining the two leaders and rushing past with authority.

Third in the Distaff last year, Forever Unbridled completed a perfect year with victories in the Fleur De Lis at Churchill Downs and the Personal Ensign at Saratoga. It was the fourth Grade 1 victory for the 5-year-old Kentucky-bred daughter of 1995 Breeders’ Cup Juvenile winner Unbridled’s Song.

The victory was the second Breeders’ Cup triumph for Stewart, who also won the 2001 Distaff at Belmont Park with Unbridled Elaine.

It also was the second victory in the Distaff for Velazquez, who won aboard Ashado at Lone Star Park in 2004 and 14th overall.