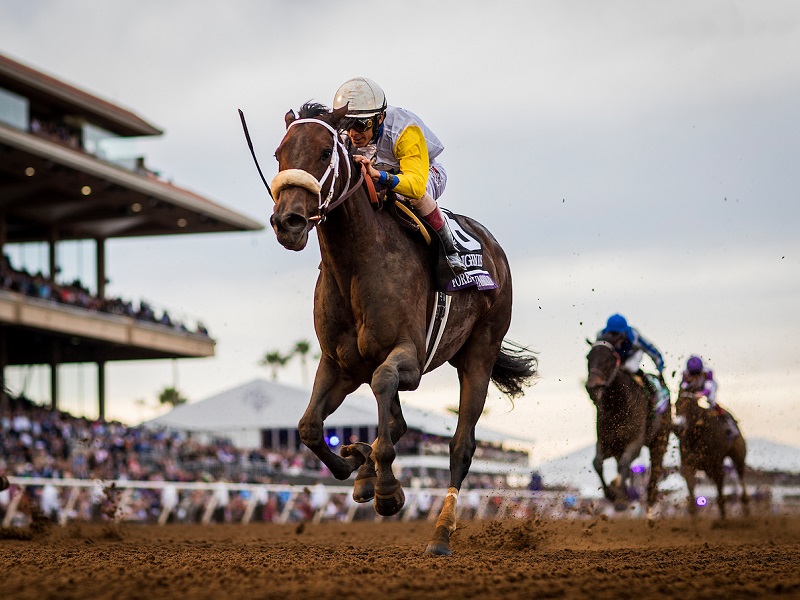 Winning trainer Dallas Stewart (Forever Unbridled) – I’m just blessed. She’s such a great filly. A championship was on the line and she’s three-for-three. She ran great and I’m proud of Johnny (Velazquez) and how he rode her. Joel (Rosario) is a great rider and those are two great jockeys, but I’m focused on the horse. She’s had that spacing and she’s been very successful with that. Last year she had an injury and we gave her plenty of time. Chuck (Fipke) was right about putting her back in training. He didn’t have to. He could have just retired her already a Grade 1 winner. He opted to bring her back and the injury wasn’t bad and she was never sore. We brought her back and put her back in training and she’s so good when you space those races out. She’s the best I’ve trained.”

Winning jockey John Velazquez (Forever Unbridled) – “The whole key was I wanted to save ground on the first turn and I was able to do that. I got her in a comfortable position where I thought she was going well. At the three-eighths pole I followed Jose Ortiz's horse (Elate) and all of a sudden she stopped and I had to go a little sooner than I wanted to. I got to the lead a little too soon for me but, I mean, it was perfect.”

Second-place trainer Bob Baffert (Abel Tasman) – “Down the backside I was a little bit worried, but down the stretch she tried hard and she ran her race. She just got beat by a really good filly today. Dallas Stewart had her ready today and in the paddock, the winner looked like the horse to beat. We're so proud of our mare. She gave us the biggest thrill winning the Kentucky Oaks and she showed up again today but just came up a little bit short. She is so sweet. She is the kindest horse in the barn. It was a great performance by her going against older horses, and it was a great performance by the winner. She ran her race. She just got beat by a really good horse. That was a tough race. The Distaff was one of the toughest races on the (Breeders' Cup) card. She really ran her heart out and just came up a touch short. She ran her heart out but just came up second. Sometimes second is good. She's such a competitor and I really wanted to see her win because she's a favorite in the barn. She's a sweetheart like American Pharoah and maybe one day they'll breed her to American Pharoah.”

Second-place jockey Mike Smith (Abel Tasman) – “She ran dynamite. The winner has a quicker turn of foot and got away from me. I was coming at them late, but it was just too late. She ran amazing. Can’t take anything away from the winner.”

Third-place trainer Richard Mandella (Paradise Woods) – “She ran a very good race. I’m already getting excited thinking about having her back next year and watch her grow into racing. I have no complaints about the way the race was run. I’m very pleased with her very fine effort.”

Third-place jockey Flavien Prat (Paradise Woods) – “I had a good trip. She relaxed nicely. I wasn’t worried about that. She did everything right. Turning for home I thought I had a good shot. She ran a good third and she’s only a 3-year-old.

Fourth-place trainer Bill Mott (Elate) – “She was training great but she was a little dull today; a little flat. Maybe it’s just late in the year and she ran like she is just getting a little tired.”

Fourth-place jockey Jose Ortiz (Elate) – “It was a good race for her. She broke well and we got a good position. She went well all the way around there. But when it came time in the stretch, it just wasn’t there. She ran out of gas. But she’s only a 3-year-old and she’ll come back next year and be even better.”

Fifth-place jockey Frankie Dettori (Mopotism) – “I had a good trip. She tried her best.”

Sixth-place jockey Mario Gutierrez (Champagne Room) – “She was a little bit rank today. I was surprised by that. And it might have hurt her a bit. But she ran hard and hung in there. She’s going to be OK.”