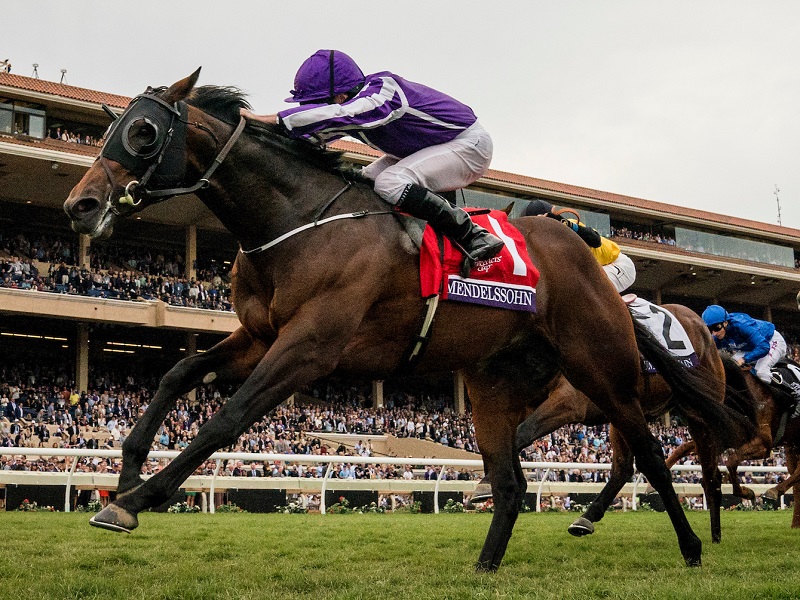 Winning trainer Aidan O’Brien (Mendelssohn) – “He’s progressed with every race. We were afraid to change him up, so we kept him on the grass. He’s stepped up every time. This is marvelous. It’s been a big team effort this year.”

Winning jockey Ryan Moore (Mendelssohn) – “We made the best of the draw in number one. He ran a good race at Newmarket and he quickened well today.”

Second-place trainer H. Graham Motion (Untamed Domain) – “He ran awesome. But, it’s awfully tough to come in second in these races. It’s better than seventh I guess. I’m happy to be second, but you only have one shot at these races. He didn’t get sharp away from there, but he never has been. He had to come very wide, but he ran great.”

Second-place jockey Jose Ortiz (Untamed Domain) – “He’s always kind of slow out of the gate and he was today again. I saw, on the inside going into the backside, lots of guys were checking. A lot of people were in trouble and clipping heels. Then I saw (Kent) Desormeaux sitting chilly on the outside. I knew we were going to be a little wide, but I’m glad I had a clear run to get second.”

Third-place trainer Chad Brown (Voting Control) – “He had a really good trip, He was just third best. I’m real proud of the horse. I thought he ran big.”

Third-place jockey Javier Castellano (Voting Control) – “I had a good trip. I followed (Mendelssohn) every step of the way. When I got through in the stretch it took him time to get some momentum. I don't think he's a mile horse. I think he's more of a mile and a sixteenth, mile and an eighth type of horse.”

Jockey Flavien Prat (Sands of Mali, 9th) – “He ran very well, gave me a kick when I asked him, but just got tired at the end.”

Jockey Frankie Dettori (James Garfield, 10th) – “It was a very rough race. He was knocked about all over the place for four furlongs. He had no chance.”