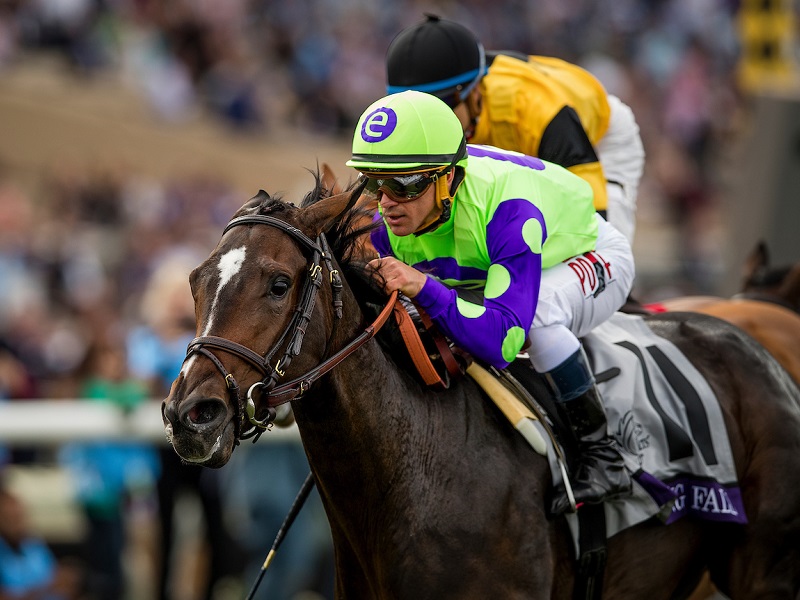 Winning trainer Chad Brown (Rushing Fall and fourth-place Significant Form) -- “Both fillies ran very well. The other filly ran terrific. She was too close to the early pace and made the first move and fortunately it took its toll on her the last sixteenth.

(On Rushing Fall) Javier (Castellano) rode a great race. The key was going out of that post and getting a spot in the first half of the field which he accomplished. From there, with a nice pace in front of us, he was comfortable where he was and he moved when he felt the time was right. She has a devastating move when you turn her loose.”

Winning jockey Javier Castellano (Rushing Fall) – “We had a little bit of a rough trip going into the first turn, but I was lucky to be able to save some ground in the first turn and then get to the outside. I had a perfect trip after that.

"She's a very professional filly. I love the way she does things. She’s a very special filly. She’s 3-for-3 and has won on soft turf and firm turf.”

Second-place trainer Christophe Clement (Best Performance) – “She’s a wonderful filly. She tried very hard. We will live to fight another day when she will be the bride instead of the bridesmaid.”

Second-place jockey Jose Ortiz (Best Performance) – “She ran very well. Broke well. I was in a good position then was shuffled back a little on the second turn. But when I asked her to go she gave me a good turn of foot.”

Third-place trainer Aidan O’Brien (September) – “She missed the break but finished well. She had run a good race. I have two nice fillies for next year.”

Third-place jockey Seamus Heffernan (September) – “All the Europeans seemed to miss the break. I did and that is the advantage the Americans have over the Europeans.”

Jockey of beaten favorite Happily Ryan Moore – “She took too long to find a gear and by then it was too late and there was some horses in front of her.”