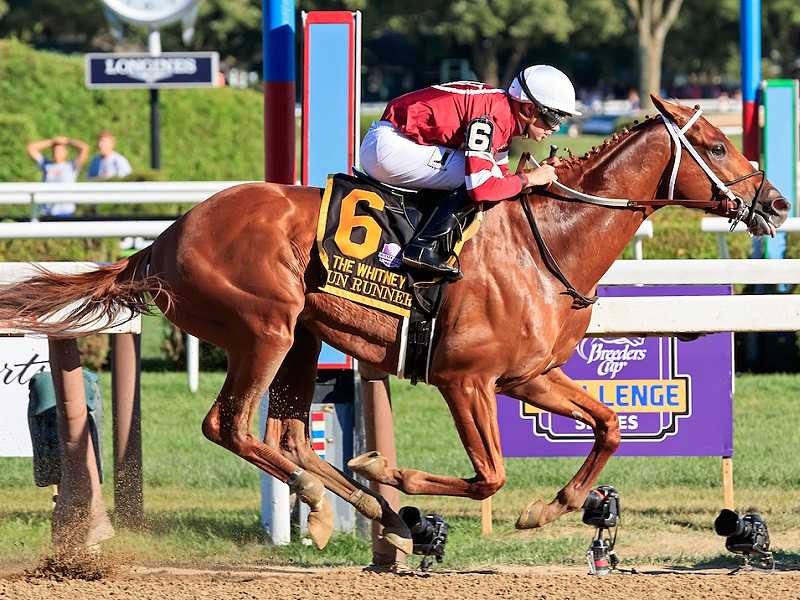 Up until he won the $6 million Breeders’ Cup Classic (G1) with authority Nov. 4 at Del Mar, the plan was to run Gun Runner as a 5-year-old, hopefully concluding with the 2018 Classic at Churchill Downs. Now with Horse of the Year all but a certainty for Gun Runner, the economics and risk are too prohibitive to pass on an entire breeding season to run one more year.

However, the 1 1/8-mile Pegasus Jan. 27 offers a lucrative bridge, providing a high-profile opportunity to pad Gun Runner’s statistics – now at 11-3-2 in 18 starts purse earnings nearing $9 million – while still making the breeding season that starts in mid-February at Three Chimneys Farm outside of Lexington, Ky.

Hall of Fame trainer Steve Asmussen calls it “kind of full circle” that Gun Runner’s racing career is scheduled to conclude in the Pegasus, the world’s richest horse race. It’s the same spot where his team hoped to start Gun Runner’s 4-year-old season before that was thwarted by a quarantine situation at the Fair Grounds racetrack in New Orleans.

“He doesn’t owe us anything,” Asmussen said. “We’re pleased with what he got done, and there’s no need to be greedy. It’s very fitting considering he was denied the opportunity to run in it last year. He deserves this.”

The timing is ideal in another way: The 47th Eclipse Awards ceremony to crown North America’s Thoroughbred champions, being hosted by Gulfstream Park for the sixth consecutive year, has been moved to two days before the Pegasus.

David Fiske, the long-time racing and breeding stock manager for Winchell Thoroughbreds, which is headed by Ron Winchell, said the Pegasus offers one last chance to showcase Gun Runner.

“The purse is enormous and it’s two days after he picks up his golden trophy,” Fiske said. “It wasn’t just the money that was hard to walk away from. It was [trying for] the earnings title and history. And racing is what we do. You start to calculate it out, to try to take the emotion out of the decision and I think everybody came to the conclusion that the smart thing to do would be to run him one more time and send him to the breeding shed.”

Winchell, who co-owns Gun Runner with Three Chimneys, noted the success Arrogate had in winning the inaugural Pegasus in January. Arrogate had beaten Gun Runner in their previous two meetings until the Breeders’ Cup.

“The original plan was to run in the Pegasus and have a similar path to what he had this past year, but after he won the Breeders’ Cup, the math, everything kind of changed. The Pegasus was the only part of the plan that we could execute,” Winchell said. “And it was the plan. Obviously the purse, it’s a new race and a little bit of a novelty. It worked out great for Arrogate. It just made a lot of sense for what we were trying to do. We were trying to do it last year, and it didn’t work out. Hopefully we can make up for that.

“I’ll be sad not to see him race next year, because, frankly, he’s doing phenomenal. It’s not easy to put something away that is working so good,” he added. “He doesn’t have any nagging problems; he’s 100 percent sound, healthy. The economics, plus the fact he’s accomplished about all he can accomplish – he really doesn’t have anything to prove at this point.”

Asmussen, who is currently with his Churchill Downs division, said Gun Runner has resumed training with “easy” gallops.

“We’ve got short of nine weeks for the Pegasus,” he said. “There won’t be much down time.”