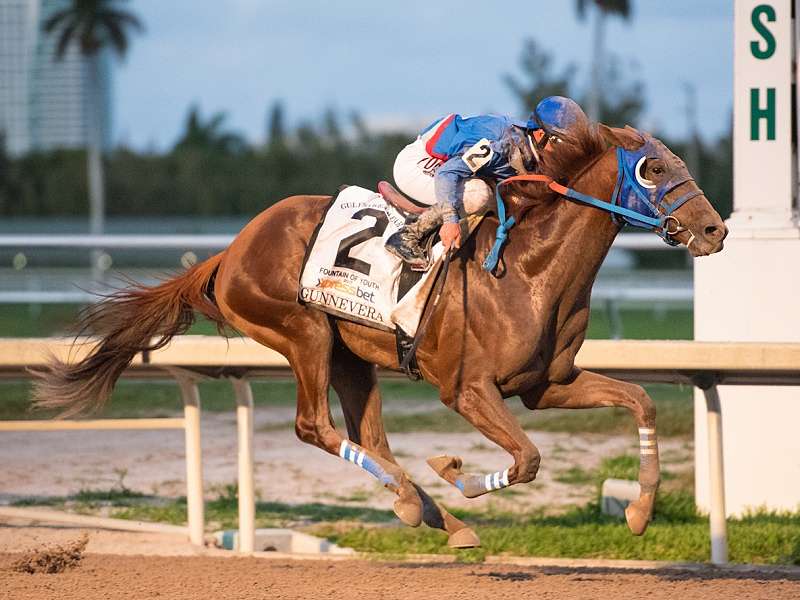 HALLANDALE BEACH, FL – After trailing his nine rivals during the early stages of Saturday’s $400,000 XpressBet.com Fountain of Youth (G2), Peacock Racing Stable’s Gunnevera unleashed a furious run on the turn into the Gulfstream Park homestretch and drew away to a commanding five-length victory.

The only one who may have covered the Gulfstream stretch with as much enthusiasm was his trainer, Antonio Sano, who sprinted along the racing surface toward the first turn following the running of the 1 1/16-mile race to great his impressive winner and accompany him to the winner’s circle.

Gunnevera, the 4-1 third betting choice who is stabled at Gulfstream Park West, provided Sano his most significant victory in the United States since emigrating from Venezuela.

Gunnevera broke his maiden at Gulfstream Park in his third career start July16 and went on to establish himself as one of the most accomplished 2-year-olds of 2016 while capturing the Saratoga Special (G2) in August and completing his juvenile season with an easy victory in the $1 million Delta Downs Jackpot (G3) in November.

Gunnevera, who finished second behind Irish War Cry in the $350,000 Holy Bull (G2) at Gulfstream  in his 3-year-old debut Feb. 4 after encountering a bumping incident on the turn into the homestretch, trailed the field into the first turn Saturday as Gulfstream-based Three Rules set the pace around the first turn and on the backstretch. Pressed by Irish War Cry, the even-money favorite ridden by Joel Rosario, Three Rules and jockey Luis Saez set fractions of 23.43 (seconds) and 47.16 for the first half mile. Javier Castellano bided his time aboard the stretch-running Gunnevera, saving ground along the backstretch. Three Rules and Irish War Cry continued to show the way after leaving the backstretch as Practical Joke, the 3-1 second choice made an eye-catching move along the inside, followed by a surging Gunnevera on the outside.

Practical Joke, a multiple Grade 1 stakes winner trained by Chad Brown, pulled alongside Three Rules leaving the turn into the stretch under jockey Jose Ortiz as Irish War Cry began to weaken and Gunnevera was looming boldly on the outside.

“I was feeling pretty good on the turn there,” said Brown, whose trainee was making his first start since finishing third in the Breeders’ Cup Juvenile (G1) at Santa Anita Nov. 5. “I thought the horse ran a great race considering the layoff. Gunnevera was much the best today – hats off to them. That horse was really impressive.”

Practical Joke continued fighting in the stretch to finish a half-length clear of Three Rules.

“I took my time with him. He’s a very professional horse. He’s a 3-year-old horse but he acts like a 6-year-old. He’s an old pro. The way he was in the post parade, he was very composed and he waited in the gate. He broke from the gate and I could have been a little closer to the pace and chased a little bit to secure my spot in the first turn but I didn’t. I took my time with him. I let him follow the pace and he started picking it up little by little. Turning for home, I knew I had it. I knew because of the way he did it when I asked him, he responded very well,” Castellano said.

“I was very lucky and very fortunate. Last time, it was another thing. I tried to save ground and unfortunately I was completely stopped at the three-eighths pole,” Castellano added. "He lost his momentum and came back again but it was too late.”

Gunnevera’s victory was worth 50 points in the Kentucky Derby qualifying system putting the Peacock Racing Stable’s star in first place with 64 total points.

"I am the happiness man on earth. I thank God, Antonio Sano and Javier Castellano – all three champions. This is my biggest win. I've been around horses since I was 5 years old. I've had as many as 40 horses in Venezuela,” said Peacock Racing’s Solomon Del-Valle through an interpreter. “Antonio bought this horse for $16,000. Incredible. I love this horse. I get up every day at 4 a.m. to see the horse. I was 100-percent sure he would win today."

Gunnevera’s performance rewarded his trainer’s confidence in him leading up to the Fountain of Youth.

“I feel very happy. The last race he lost the race because he got bumped. This was different – more horses, different speed,” Sano said. “I thought 100 percent that he would win today.”

Before fading to seventh at the finish of the Fountain of Youth, Irish War Cry had won all three of his prior starts, including a commanding 3 ¾-length victory in the Holy Bull.

“[ Joel Rosario] felt he was in a good enough spot. I wish he had maybe settled a little more off the pace perhaps, but I don’t want to make excuses,” trainer Graham Motion said. “He looked like he was going pretty nicely. I can’t really say what happened, whether he bounced or not. He ran an awfully big race last time. He looks fine. My instincts and first reaction is that possibly I ran him back too quick. It’s hard to know. He’s done so well between races.”