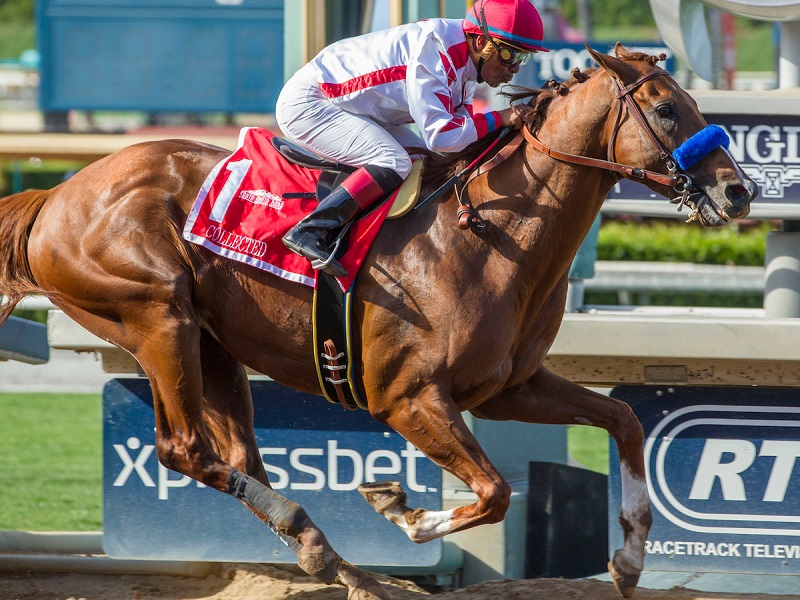 ARCADIA, Calif. (April 22, 2017) — In a performance that moves him into consideration as an “A-List” player on the nation’s handicap horse division stage, Bob Baffert’s Collected demolished four rivals in taking Saturday’s Grade II, $200,000 Californian Stakes by 3 ¾ lengths under Martin Garcia while getting a mile and one eighth in a rapid 1:47.73.

“When we turned him out last year (following a disappointing run in the Grade I Preakness Stakes May 21), Mel McGuire in Kentucky, really did a great job getting him ready,” said Baffert. “(He) got him to relax more and taking the blinkers off helped a lot too.

Owned by Speedway Stable, LLC, Collected, a 4-year-old Kentucky-bred colt by City Zip, notched his sixth win from nine starts and with the winner’s share of $120,000, he increased his earnings to $600,500.

A gate to wire winner of the Santana Mile, Collected sat a close second today to longshot Prime Attraction early, went to the lead a half mile from home and was in complete command at the top of the stretch.

“In the Santana, he wasn’t even ready for that race,” said Garcia. “He was maybe three-quarters and I even told Bob that I was going to go easy in that race…This time, I was pressured a little and knew there was speed to my outside. He always likes to run on the lead. Today, I just let him break and run where he wanted to. When it was time to go, I just asked and he took off.”

Ridden by Kent Desormeaux, Follow Me Crev was well in-hand while positioned fourth early and rallied past Prospect Park to finish second by 1 ½ lengths. Off at 5-2, Follow Me Crev paid $3.00 and $2.10.

Prospect Park, who was attentive to the pace while third early under Flavien Prat, moved to challenge the winner around the far turn but was no match. Off at 6-1, he paid $2.60 to show.

Note: Baffert’s multiple graded stakes winning Cupid, who was 3-1 on the morning line, injured himself on the walk-over from the stable area to the receiving barn and was subsequently scratched.