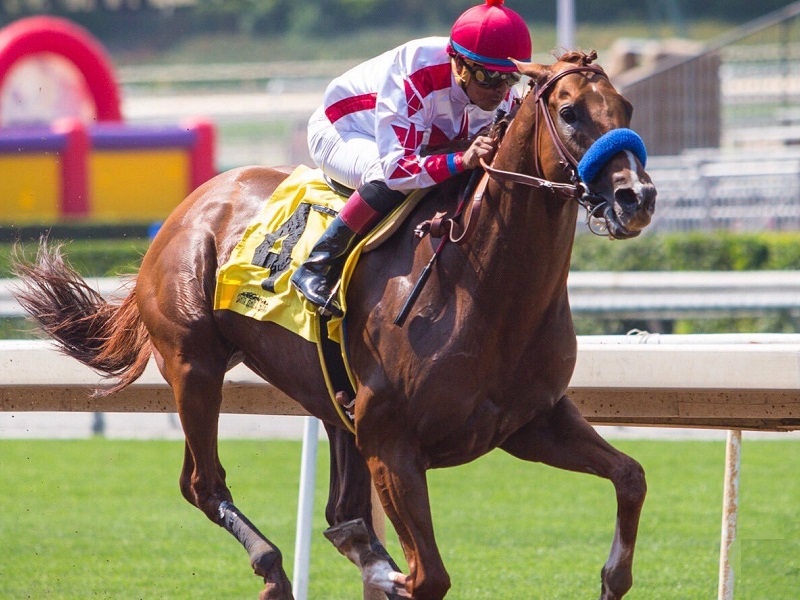 ARCADIA, Calif. (June 24, 2017) — Bob Baffert provided more irrefutable evidence on Saturday at Santa Anita that his stable is perhaps deeper and stronger than ever as his rapidly improving 4-year-old Collected took command a quarter mile from home en route to a scintillating 14-length romp in Santa Anita’s Grade III, $100,000 Precisionist Stakes. Ridden by Martin Garcia, he’s now unbeaten in three starts this year as he got a mile and one sixteenth, hand ridden, in 1:41.52.

“We were going to run him in the Gold Cup (at Santa Anita, Grade I, 1 ¼ miles on May 27, but he just wasn’t working as well as I would have wanted for that,” said Baffert, whose stable ranked second in 2017 North American earnings coming into the weekend with $12.5 million—compared to Todd Pletcher’s $13.1 million. “This middle distance is more his thing and I can see he reacts better. As long as I keep him like this, he’s going to be really tough to beat.”

Fresh off a 3 ¾ length win here in the Grade II Californian at a mile and one eighth, Collected, who sat second prior to pouncing on pacesetter Donworth approaching the quarter pole, registered his fourth graded stakes win and is now 10-7-1-0 overall. With the winner’s share of $60,000, he now has earnings of $660,500.

“He’s very special,” said Garcia, who has ridden Collected in eight out of his 10 starts, including six of his seven wins. “He can be on the lead or off of it…I let him be where he wanted to be today…I think the older he gets, the calmer he is. He doesn’t have to be on the lead, I can take him back.

“I think he can go a mile and a quarter, but I don’t think that guy (motioning to Baffert) wants me to because he might beat Arrogate!”

Baffert’s Cat Burglar, who was ridden by Rafael Bejarano, rallied from third three furlongs from home and completed the exacta, finishing 1 ¾ lengths in front of Accelerate. Off at 6-1, Cat Burglar paid $4.80 and $2.40.

Last heading into the far turn, Accelerate ran on to touch Donworth by a neck for the show. The second choice at 2-1, Accelerate paid $2.10 to show.

First post time for a 10-race card on Sunday at Santa Anita is at 1 p.m. Admission gates open at 11 a.m.