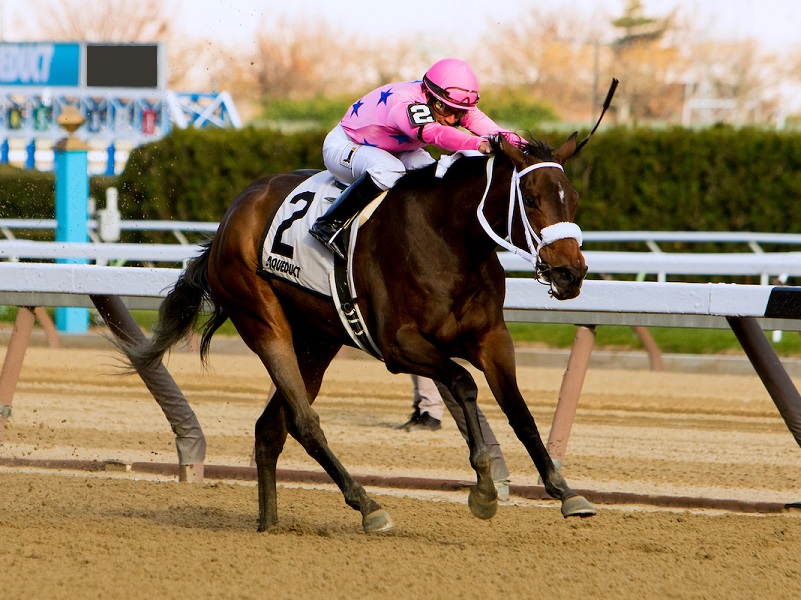 OZONE PARK, N.Y. - Arlene's Sun Star Stable's Miss Sky Warrior will get back to the site of some of her biggest victories in the Grade 3, $250,000 Comely for 3-year-old fillies, one of three stakes on "Black Friday" at Aqueduct Racetrack.

Trained by Kelly Breen, Miss Sky Warrior is a perfect 3-for-3 in graded stakes at the Big A, including a 13-length romp in the Grade 2 Gazelle in April. The First Samurai filly will be making her second start following a nearly six-month layoff after finishing a troubled eighth in the Kentucky Oaks.

Ridden in her return by Hall of Famer Javier Castellano, she stuck with her frontrunning style and set a pressured early pace before fading to fourth as the 3-5 favorite while taking on older horses in the Grade 3 Turnback the Alarm Handicap on October 28 at Belmont Park.

"Everybody was disappointed after her last race, including Javier," said Al London of Arlene's Sun Star Stable. "She has a very long stride and goes very fast, but it looks like she's going a lot slower. She can be deceiving that way. She went the first half of the race in 45 [seconds] and change and that was too fast for any horse going that distance. Being fresh like that off a layoff, it even doubled her problem. She's not a nut job, she just goes quick. That's her style and she likes to run.

"You have to be careful of that when you're a rider," he added. "Javier's been on her now and he knows that. We won't be going that fast the first part of the race. She's training very well and we're cautiously optimistic that she's going to run well Friday. She was just very sharp off the layoff and that did her in last time. She's a very good horse. She's won a lot of races, she's won a lot of money, she's sound, it's just that she has a way of fooling people. She can be on the front and relax, or she can be rated. Either way, if she doesn't go too fast, she'll finish well for us. We'll see what happens."

With Castellano retaining the mount, Miss Sky Warrior will break from post 8.

Set to take on Miss Sky Warrior are Gary and Mary West's Grade 2 Black-Eyed Susan heroine Actress, making her first start since her sixth-place effort in the Grade 1 Cotillion at Parx in September for trainer Jason Servis; Bonita Bianca, winner of the New York Oaks this summer, for the Rudy Rodriguez barn and owners Michael Dubb, Bethlehem Stables and Michael Imperio; Winter Melody winner Analyze for trainer Michael Matz; Phipps Stable's homebred Parade, third to Jamyson 'n Ginger in an optional claimer on November 9 for Hall of Fame trainer Shug McGaughey; Linda Rice-trained Crimson Frost, a seven-length allowance winner on November 8; You Know Too, sixth in the Safely Kept last time out for trainer Michael Gorham; and a pair of up-and-comers for trainer Todd Pletcher in Run and Go and Tapella, each making their stakes debuts.