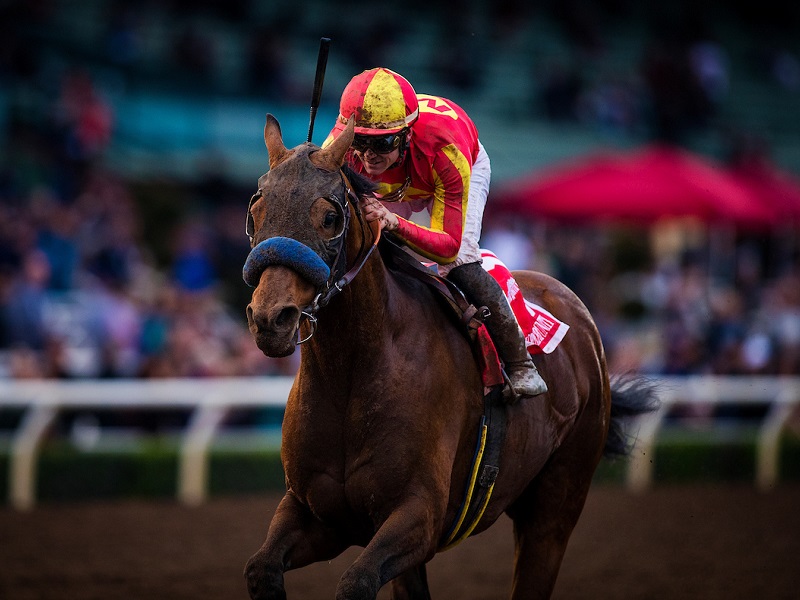 Churchill Downs-based rising stars The Player and Honorable Duty are set to bid for glory over their home track, but both face a roster of accomplished invaders headed by a pair of Jockey Club Gold Cup (GI) winners in New York-based Diversify and the Bob Baffert-trained Hoppertunity in Friday’s 143rd running of the $500,000-guaranteed Clark Handicap Presented by Norton Healthcare (GI), the premier race of the historic track’s Fall Meet.

The Clark heads a trio of stakes races on the 12-race card on the day after Thanksgiving that is traditionally the most popular racing day Churchill Downs’ Fall Meet. The main event is scheduled as the 11th race on the Friday program that also features the 27th running of the $200,000 Mrs. Revere (GII) for 3-year-old fillies on turf and the 13th running of the $80,000-added Dream Supreme Overnight Stakes for fillies and mares ages 3 and up. Post time for Friday’s first race is 1 p.m. (EST).

The 1 1/8-mile race for 3-year-olds and up attracted a field a nine horses bidding to succeed Winchell Thoroughbreds and Three Chimneys Farm’s 2016 Clark winner Gun Runner, the frontrunner for 2017 “Horse of the Year” honors following a stellar campaign capped by his victory in the $6 million Breeders’ Cup Classic (GI) at Del Mar.

Like the Kentucky Derby Presented by Woodford Reserve (GI) and the Longines Kentucky Oaks (GI), the Clark Handicap was run for the first time in 1875’s inaugural racing meet at Churchill Downs, which was then known as the Louisville Jockey Club. The Clark, the Derby and the Oaks have been run each year without interruption since their debuts.

The Player and Honorable Duty, like Gun Runner, are based at Churchill Downs and each seeks a Clark Handicap triumph that would cap a successful racing year and vault them into national racing prominence.

William “Buff” Bradley and Carl Hurst’s improving 3-year-old The Player (10-4-3-1—$345,385) enters the Clark off an impressive three-length victory over a sloppy track in the $200,000 Fayette (GII) at Keeneland. It was the biggest win to date by the son of Street Hero, whose previous highlights were runner-up finishes in the recent Ack Ack (GIII) at Churchill Downs and the 2016 Indiana Derby (GII). Co-owner Bradley trains The Player, who is 2-1-1 in five races at his home track, and he will give three-time Kentucky Derby-winning jockey Calvin Borel a leg-up into the saddle.

“He couldn’t be doing any better coming into this race,” Bradley said. “Calvin got off him the other morning when he worked and I couldn’t get him to stop smiling.”

Bore will seek his second Clark win aboard The Player, who will carry 119 pounds from post seven.

Honorable Duty (16-7-4-1—$799,796), a 5-year-old Distorted Humor gelding owned by David A. Ross’ DARRS Inc. and trained by Brendan Walsh, has enjoyed a strong year at Churchill Downs that includes a 4 ¾-length romp in September’s $200,000 Lukas Classic (GIII) and runner-up finishes to Gun Runner in the $500,000 Stephen Foster Handicap Presented by GE Appliances (GI) and Bird Song in the $400,000 Alysheba Presented by Big Fish Casino (GII). His only poor 2017 outing was a sixth-place run behind The Player over a sloppy track in Keeneland’s Fayette, which has Walsh hoping for a fast surface for his Clark run.

“I just don’t think Honorable Duty handles the off going very well,” Walsh said. “He never took to the surface at Keeneland. The track was playing forwardly and he never got a hold of the ground with how wet it was.”

Corey Lanerie, the leading jockey of the Fall Meet, will seek his first Clark victory aboard Honorable Duty, who will carry 120 pounds from post five.

While The Player and Honorable Duty lead the local hopes, a key invader for the Clark is Lauren Evans and Ralph M. Evans’ Diversify (10-7-2-0—$775,425), a New York-bred son of Bellamy Road who will travel from the Empire State off of a front-running victory over Keen Ice in the $750,000 Jockey Club Gold Cup (GI) at Belmont Park. Diversify brings a three-race win streak in to the Clark that also includes wins over New York-bred foes in the Evan Shipman at Saratoga and Belmont’s Saginaw. Friday’s race will be the first for Diversify outside of his home state as he bids to emulate Effinex, the New York-bred who traveled to Churchill Downs to win the Clark in 2015. The Rick Violette Jr. trainee was assigned co-high weight of 123 pounds and will break from the outside post under jockey Irad Ortiz Jr., who has ridden Diversify in each of his three recent victories.

The most familiar face in the Clark is that of Mark Pegram, Karl Watson and Paul Weitman’s Hopportunity (27-7-7-4—$4,284,025), who won its 2014 renewal and will compete in the race for a fourth time. The 6-year-old son of Any Given Saturday finished fourth to Gun Runner in last year’s running and was the runner-up to Effinex in 2015. Baffert’s veteran enters the Clark off a runner-up finish in the Oct. 28 Comma To The Top Stakes at Santa Anita, his first outing since a sixth-place run behind stablemate Arrogate and Gun Runner in the $10 million Dubai World Cup (GI) at Dubai’s Meydan Racecourse.

“I’ll never forget when he won the 2014 Clark,” Baffert said. “He’s always been right there all the time. He’s made $4 million by being right there and has always been a barn favorite. It sounds like it will be a tough Clark so it won’t be a walk in the park by any means.”

Florent Geroux, who earned his first Clark win last year aboard Gun Runner, will ride Hopportunity, who breaks from the inside post under co-high weight of 123 pounds. A win on Friday would make Baffert’s veteran only the fourth two-time winner of the Clark, joining Bob’s Dusty (1977, 1978), Bold Favorite (1968, 1960) and Hodge (1915-1916).

The Todd Pletcher-trained Destin (13-5-2-2—$938,000), who ran sixth to Nyquist in the 2016 Kentucky Derby, comes into the Clark off a 1 ½-length victory in the $200,000 Breeders’ Cup Marathon (GII) at Del Mar. Destin had previously finished fifth in Diversity’s Jockey Club Gold Cup. Ricardo Santana Jr. will be aboard the 4-year-old son of Giant’s Causeway, who will carry 121 pounds from post four.