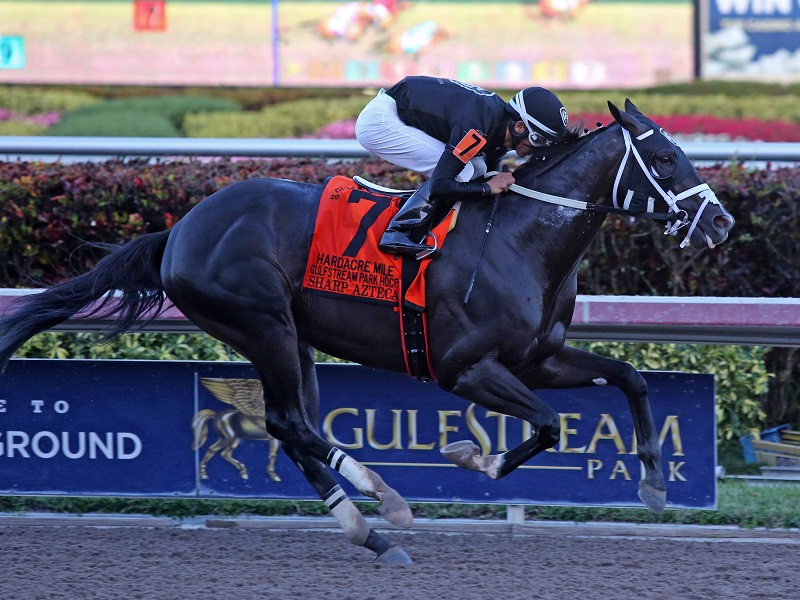 HALLANDALE BEACH, FL – Returning to his favorite track and distance for his 4-year-old debut, Gelfenstein Farm’s Sharp Azteca set the pace before opening up on his rivals down the stretch for a 4 ½-length victory in the $350,000 Hardacre Mile Gulfstream Park Handicap Saturday at Gulfstream Park.

Racing for the first time since being caught late when second by a half-length in the seven-furlong Malibu (G1) Dec. 26 at Santa Anita, Sharp Azteca ($6) finished up in 1:34.55 over a fast main track for his fourth win in as many starts at the distance and third in four career tries at Gulfstream.

“He’s home,” trainer Jorge Navarro said. “I told [jockey Edgard Zayas], ‘Once you put that head up, wherever you think you’re going to make the move, make it. I don’t want you hand-riding him, I want you to make it. Don’t look back, the wire’s in front of you.’”

Sharp Azteca broke between horses and got squeezed momentarily before finding his stride and eased up to challenge defending champion Blofeld on his inside through an opening quarter-mile of 23.61 seconds as Awesome Banner and 8-5 favorite Tommy Macho exchanged spots behind the top two.

Confidently handled by Zayas, Sharp Azteca met no resistance taking over the lead after a half in 46.21 as Blofeld began to drop back and Awesome Banner and Tommy Macho moved up to launch their bids.

“I couldn’t have asked for a better plan. Breaking he was slow, they kind of bumped him and I was like, ‘Whoa, what happened?’” Navarro said. “I really wanted a horse to go with him because this horse can get lazy. When I saw that I said, ‘All right.’ He’s a runner. The way this horse is, he wants to bury you down. If you look him in the eye, he’s going to bury you down.”

Once straightened for home, Sharp Azteca responded to a pair of taps from Zayas’ whip and drew off impressively for his first graded win since the Pat Day Mile (G3) last May. It was three lengths back to Awesome Slew in second and another 1 ¾ lengths to Tommy Macho, who had won his last two tries going a mile at Gulfstream, both in graded stakes.

“It worked out perfect for him. I was a little worried because I didn’t really want to go to the lead because he needs a horse to be a target,” Zayas said. “My horse, he’s a grinder. He’s a once-paced horse and he just doesn’t stop. Coming to the turn I hit him twice and he picked it up, and after that it was all over.”

“He’s very special,” Navarro said. “He looks like a racehorse. He’s the most beautiful animal I’ve ever seen in my life. When I went to saddle him, I went ‘Wow.’”