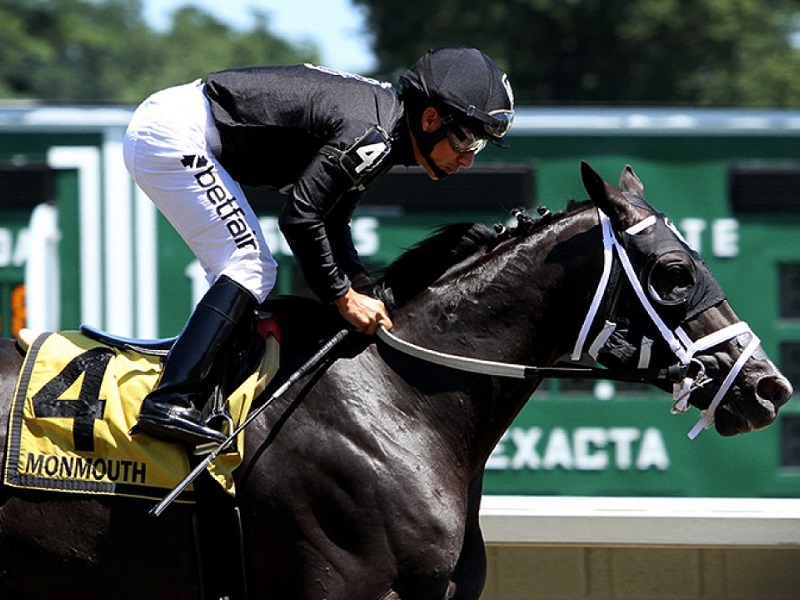 In the 43rd edition of the Grade 3, $100,000 Monmouth Cup, Geldenstein Farms Sharp Azteca proved that racing around two turns was well within his reach as the multiple graded stakes winner set a new track record while cruising to a dominating 7 ½ lengths victory.

The 4-year-old-colt, who is conditioned by Monmouth’s perennial leading trainer Jorge Navarro, was dropping down from the runner-up position last time out in the Metropolitan Mile. While shouldering highweight of 123 pounds, Sharp Azteca assuredly outclassed the other three horses in the field while covering the 1 1/16 miles on a fast track in a record of 1:40.19.  His final time eclipsed the old mark of 1:40.20 Formal Gold set almost 20 years ago on August 23, 1997.

“Mission accomplished. We put the mile and a sixteenth away,” said Navarro, in reference to having the colt win a two-turn stakes race in advance of his scheduled run in the Breeders’ Cup Dirt Mile, a two-turn race at Del Mar. “And it was a relief to get him back in great shape. He almost got loose in the barn last night and cut his head. Then on the way over to the paddock today, he flipped. He was okay, but it was another worry. It was fantastic to see him run so well after all that.”

Dispatched as the 1-5 favorite and ridden confidently by Paco Lopez, Sharp Azteca was content to sit just off the pace as Classy Class set splits of 23.94, 47.13 up the backside. By the time they raced through the far turn in 1:10.69, Sharp Azteca was in his groove and taking command, and when he reached the top of the lane, he dusted off his rival. From there Sharp Azteca easily increased his margin of victory through the stretch in what resembled a paid workout.

Donegal Moon closed willingly to be second, another 7 ½ lengths in front of Just Call Kenny while Classy Class faded to last. Scuba was a scratch.

The Kentucky-bred Sharp Azteca, who was third in the Godolphin Mile in Dubai earlier in the year, has now won six of 13 starts and improved his earnings to $956,740 with the $60,000 winner’s share of the purse. The son of Freud out of So Sharp by Saint Liam returned $2.60 for a $2 wager.

Navarro captured the Monmouth Cup for the first time, while Lopez won the race for the second time after having taken the 2013 edition with Pants on Fire.