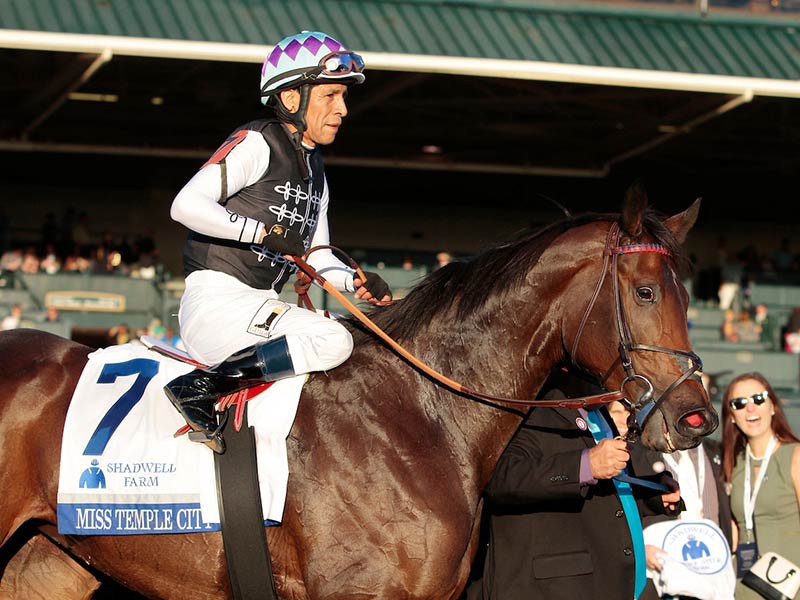 It will be the third straight trip to Royal Ascot for Miss Temple City, bred and co-owned by Bob Feld along with partners Sagamore Farm and Needle In A Haystack. Fourth in the 2015 Coronation (G1) and 2016 Duke of Cambridge (G2), she arrived in England on Tuesday.

Motion also considered a return run in the Duke of Cambridge for Miss Temple City, who shows eight works over the all-weather and turf courses at Fair Hill since mid-April, most recently going six furlongs in 1:12.40 June 10.

Maryland-based Hall of Fame jockey Edgar Prado, up for each of her last three races, will be at Royal Ascot to ride Miss Temple City, who broke her maiden Oct. 10, 2014 at Laurel Park and earned her first stakes victory in the 2015 Hilltop at historic Pimlico Race Course.

“She’s been training real well. The last couple works were excellent. Graham was very happy with her performance. She’s ready to go,” Prado said. “It’s going to be an honor to participate in that kind of race and be part of the festival.”

Setbacks on and off the track have been to blame for Miss Temple City’s belated start this year. She missed a few weeks of training after getting loose one morning at Palm Meadows in Boynton Beach, Fla. where Motion keeps a winter string, and missed Keeneland’s spring meet.

Miss Temple City was scratched from both the Churchill Distaff Turf Mile (G2) May 6 and the Beaugay (G3) May 13 at Belmont Park when rain softened the turf course. Her previous wins over males include becoming the first filly or mare to take the Makers 46 Mile (G1) last April in her Ascot prep.

Prado won the Shadwell Turf Mile (G1) against males and Matriarch (G1) last fall with Miss Temple City, the latter coming Dec. 4 at Del Mar in her most recent start. In between they ran fifth in the Breeders’ Cup Mile (G1).

“She was there before and she’s been running all over the country so I don’t think it will be a problem for her to adjust to that particular day,” Prado said. “She’s very professional and very competitive. Hopefully she gets the job done.”

Prado said he will leave Maryland for England on Sunday and has already begun doing his homework for the race, won by Tepin last year.

“I rode in England but not at Royal Ascot. Definitely, I’ve been watching a few races and as soon as I get there I will walk the course and see what’s the best part of the track,” Prado said. “I’ll be shipping in Sunday night. Hopefully everything goes well. I arrive Monday. I’m going to go to the track in the afternoon and the race is Tuesday. Hopefully we have good results.”