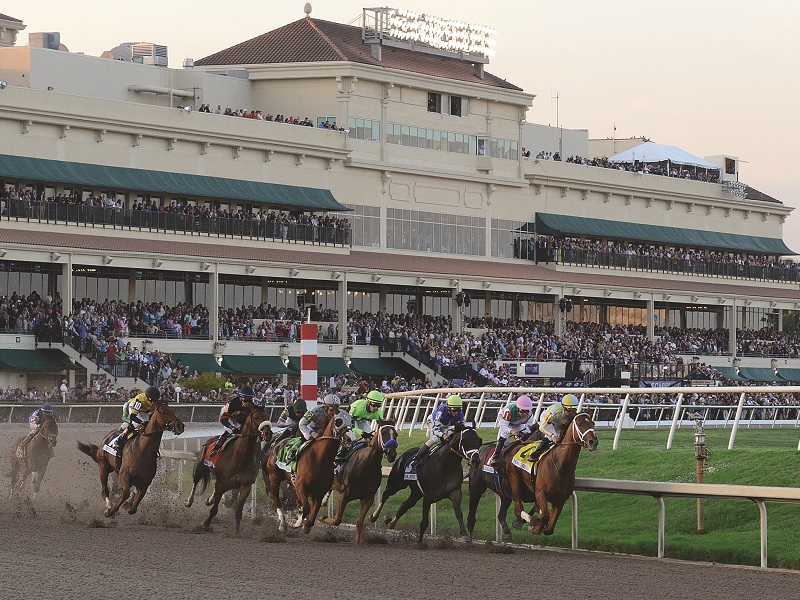 The elite Thoroughbred meeting, which will run through April 1, will get underway Saturday with a program featuring the $1.1 million Claiming Crown.

The second running of the Pegasus World Cup on Jan. 27 and the 67th running of the Florida Derby on March 31 will headline a record stakes schedule of 94 stakes worth $28.6 million in purses.

The Pegasus World Cup, in which top-rated Arrogate dominated 11 rivals, including two-time Horse of the Year California Chrome, is on course to once again host the highest-profile Thoroughbreds in North America. Gun Runner, the 2017 Breeders’ Cup Classic (G1) victor and Horse of the Year-in-waiting, is scheduled to make the final start of his spectacular career in the Pegasus World Cup, joined by Collected, West Coast, War Story and local hero Gunnevera, who rounded out the Top 5 positions in the main event of the Breeders’ Cup at Del Mar Nov. 4. Breeders’ Cup Distaff champion Forever Unbridled is also being pointed toward a start against the boys in the 1 1/8-mile showcase that will receive a $4 million purse boost this year.

The 67th running of the Florida Derby figures to once again have a significant impact on the Triple Crown campaign. Three of the last five Kentucky Derby (G1) winners prepped with victories in Gulfstream’s 1 1/8-mile stakes for 3-year-olds, including Always Dreaming and Nyquist, who achieved the feat in 2017 and 2016 respectively, and Orb who pulled off the Derby Double in 2013. Overall, 44 Kentucky Derby winners started in the Florida Derby, which has also been a springboard for the winners of 59 Triple Crown events.

Several 2017 Triple Crown hopefuls will be stabled at Gulfstream Park and its satellite facilities, Palm Meadows in Palm Beach County and Gulfstream Park West in Miami Gardens, including Chad Brown-trained Good Magic, the winner of the 2017 Breeders’ Cup Juvenile (G1) at Del Mar, and Kiaran Mc Laughlin-trained Entice, the winner of the Kentucky Jockey Club (G2) at Churchill Downs Nov. 25. Trainer Todd Pletcher, who saddled Always Dreaming for victories in the Florida Derby and the Kentucky Derby, also has many strong Florida Derby and Triple Crown prospects training at Palm Beach Downs, including Montauk, a son of Medaglia d’Oro who authored a stunning debut victory at Belmont Park in October.

Pletcher will seek an unprecedented 15th consecutive Championship Meet title, while jockey Luis Saez, who succeeded five-time defending champion Javier Castellano as the top Championship Meet rider, will be on a quest for a repeat.

The Championship Meet’s 18 weekends will include 12 Super Saturdays featuring between three and 12 stakes.

The Claiming Crown will kick off the highly anticipated meet Saturday with nine stakes for former and current claiming horses, including the $200,000 Jewel. The Claiming Crown will be followed on Dec. 9 by the $600,000 Clasico Internacional del Caribe, which will be contested for the first time outside the Caribbean and Latin America. The annual five-stakes event will be headlined by the $300,000 Clasico del Caribe, which has attracted Puerto Rico Triple Crown champion Justiciero.

The Pegasus World Cup, which was attended by such A-List celebrities as Usher and Vanessa Hudgens last year, will be supported by seven stakes worth a total of $1.25 million Saturday, Jan. 27. The Who’s Who of Thoroughbred Racing will gather in Gulfstream’s Sport of Kings facility Thursday evening, Jan. 25 for the 47th Eclipse Awards, during which Gun Runner is expected to be officially recognized as the 2017 Horse of the Year. Gulfstream will also play host to the Pegasus World Cup Betting Championship Jan. 26-27 and the Clasico del Caribe Betting Challenge Dec. 9.

“The Stronach Group continues to reshape, reinvent and reimagine the racing experience with exceptional facilities, exceptional dining and world-class racing,” said Bill Badgett, General Manager of Gulfstream Park. “Not only are we excited with our racing product – which will feature Hall of Fame trainers and jockeys and many of the best horses in the world – but we’re excited to show off our unique facility and we look forward to our fans and guests being part of our exceptional events. There’s few things in sport that rival a Pegasus World Cup or Florida Derby. There has never been a Championship Meet packed with so many events or so much excitement. We’re looking at a very special and memorable winter.”

The Florida Derby Day program will offer seven stakes, including four graded-stakes in support of the Grade 1 attraction.