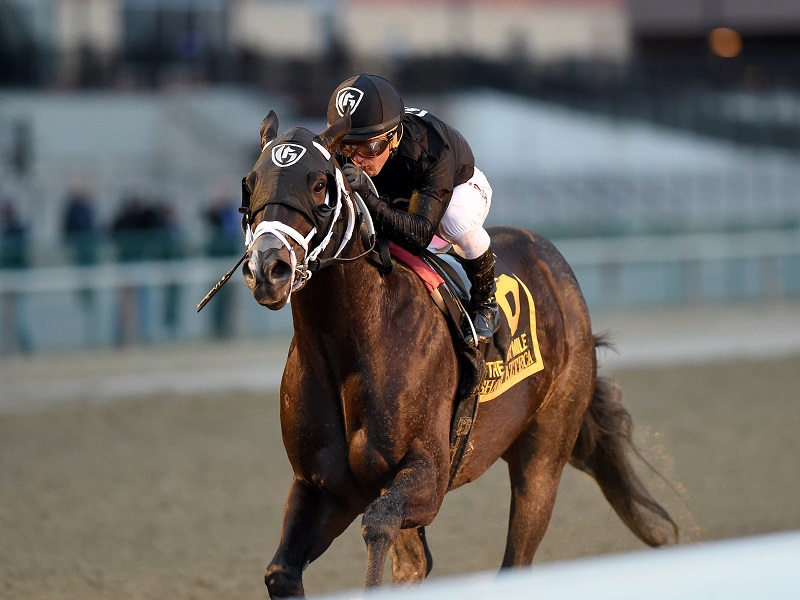 For the 4-year-old Freud colt, however, the fourth time was the charm.

Sharp Azteca broke alertly under Hall of Famer Javier Castellano and took up his characteristic position at the head of the field. He was quickly joined on the front end by West Coast shipper Americanize and Seymourdini, a recent fourth in the Grade 3 Bold Ruler, who edged ahead through an opening quarter-mile in 22.78 seconds and a half in 45.97. Sharp Azteca contently settled behind those two as the trio raced well ahead of the rest of the field up the backstretch.

Holding his three-wide position, Castellano called on Sharp Azteca in the turn, going head-to-head with Americanize as Seymourdini faded along the rail. Sharp Azteca shook clear of Americanize for good at the top of the stretch and, under a light drive, drew clear to complete the mile in a final time of 1:35.17.

"There was a lot of early speed with the horses in this race," said Castellano, who recently picked up the mount aboard Sharp Azteca to win his second straight Cigar Mile following last year's victory aboard Connect. "I was really impressed by the way he did it. I just asked him to win the race back, I didn't push him all the way. We've known this is a special horse for a long time. You don't see too many horses do this; when they're going too fast in the Breeders' Cup, then they have a short rest and the way they perform today. A mile race against a good field of horses, I think he's very impressive."

Mind Your Biscuits, the 2016 New York-bred Horse of the Year, turned in a strong rally from fifth in the field of 10 to secure second, 2 ¾ lengths ahead of Practical Joke in third.

In the Dirt Mile, he led under a pressured early pace but couldn't hold off a late charge from Battle of Midway, finishing a half-length behind the winner. Despite the Breeders' Cup loss, Sharp Azteca has finished in the money in all seven starts this year, including wins in the Grade 2 Gulfstream Park Handicap, the Grade 3 Monmouth Cup, and, prior to the Breeders' Cup, a four-length victory in the Kelso at a one-turn mile on September 23 at Belmont Park in addition to his Cigar Mile win.

"I bought him. I picked him. It means a lot," Navarro said of the Grade 1 win. "When the horse was a 3-year-old, I mentioned that he was one of the top 3-year-olds and another trainer came up to me and said, 'Are you kidding, do you know what you are talking about?' Here it is. He is the only [member of the 2016 three-year-old class] still around.

"Everything with him is details," he added. "He came out [of the Breeders' Cup] tired. We paid attention to every little thing. We wanted to do the right thing. And I know we were sitting on that Grade 1, and you know what, I wasn't expecting this big of a performance. He ran his eyes out. What else can I ask?"

Navarro noted that the Grade 1, $16 million Pegasus World Cup Invitational on January 27 at Gulfstream Park could be the next stop for his stable star.

"After this performance, why not?" he said. "We are going to see how he comes out of this first."