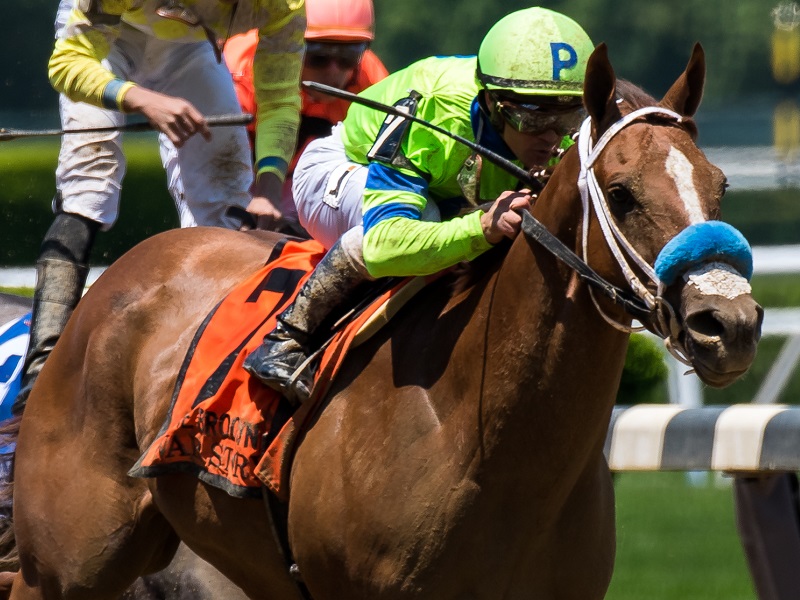 ELMONT, N.Y. - Under a perfectly timed ride from Javier Castellano, War Story came from just off the pace and rolled to a 2 ½-length victory over Sunny Ridge to win Saturday's Grade 2, $400,000 Brooklyn Invitational, the first of nine graded races on the Belmont Stakes undercard at Belmont Park.

Content to run in second as favored Tu Brutus led the field of six marathoners through fractions of 24.69 seconds for the opening quarter, 50.06 for the half, 1:15.85 for three-quarters and 1:42.16 for the mile, Castellano and War Story let Sunny Ridge pass them near the quarter pole and take the lead. Straightening for home, War Story was given his cue by Castellano and hit his best stride in midstretch to cruise under the wire in 2:31.02 for the 1 ½ miles.

"That's what I was looking for today," said Castellano, who this year was elected to racing's Hall of Fame. "There wasn't much speed; there was only one target and I didn't want to wait because this is a mile and a half and they're not used to these types of races. I put him in the game, but at the same time, I took up a little and gave him a break all the way down the backside. At the top of the stretch, when I asked him again, he took off."

The win was the first in four starts this year for the 5-year-old War Story, who is trained by Jorge Navarro for Loooch Racing Stables, Glenn Ellis and Imaginary Stables.

"I've had this horse for about six months," said Navarro of the gelded son of Northern Afleet, who most recently finished third in the Grade 2 Charles Town Classic. "I haven't done anything special with him, but he had a little bit of mental issues, so I worked with him. He lets you know what he doesn't want you to do with him. Today he ran hard; really dug in and showed a lot of heart ... I am very happy with the way he won today. I don't know what is next for him. We'll get him back to the barn and I'll talk with the owner and we'll see."

Tu Brutus finished third, two lengths behind Sunny Ridge. Following him under the wire were Governor Malibu, Doyouknowsomething, and Behesht. Idolo Porteno and morning-line favorite Send It In were scratched.