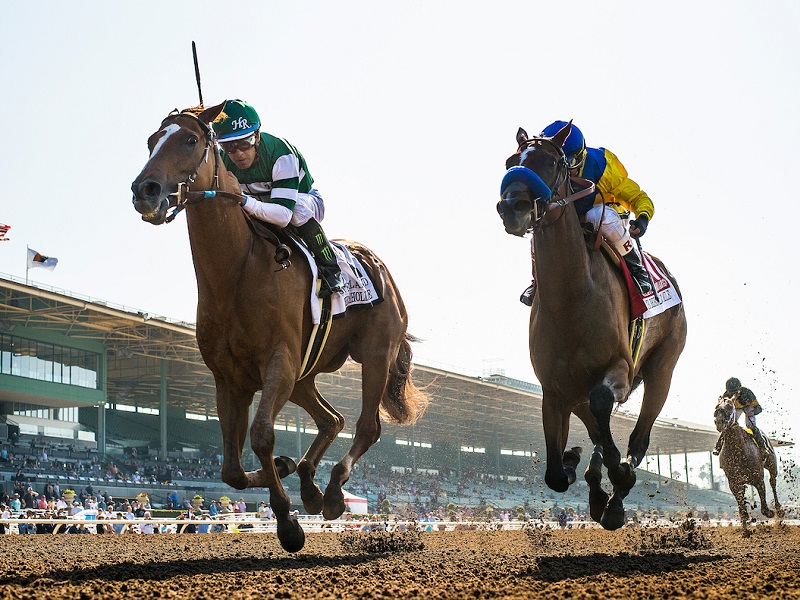 ARCADIA, Calif. (June 3, 2017) — It was a match race on paper and Saturday’s Grade I, $400,000 Beholder Mile developed into one on the track, as Victor Espinoza seized the initiative going into the Club House turn aboard favored Stellar Wind and prevailed by a neck in a desperate stretch duel with Vale Dori and Rafael Bejarano. Owned by Hronis Racing, LLC and trained by John Sadler, Stellar Wind got the mile in 1:36.14 and is now, at age five, unbeaten in two starts this year.

Reduced by a pair of scratches to a field of three older mares, Vale Dori, as expected, rocketed to the lead from her rail post position and Finest City, Eclipse Champion Female Sprinter from 2016, broke sharply and was sitting second heading to the first turn, but Espinoza would have none of it aboard Stellar Wind.

“Victor said Mike out-broke him a little bit and he didn’t want to let Vale Dori get away with an easy lead,” said Sadler. “She’s so tough. She doesn’t lose photos. This was closer than I thought it was going to be but that other mare (Vale Dori) is really a top mare now. We’ll probably look at the Clement Hirsch (Grade I, 1 1/16 miles on July 30) next at Del Mar, just like last year.”

“The other two broke in front of me so I thought I could follow them” said Espinoza. “Mike took a hold of his horse going into the first turn so I wanted to find an opening and just let her run. I let her go and just put her right next to Vale Dori…I had confidence in her. She’s always like that in the stretch.

“She won’t do much on her own. She’s amazing, she’s an incredible mare, but I have to do my job. She always wins by enough. I have to encourage her to go forward…She has so much power that it’s hard for any other horse to beat her when it comes to head and head down the lane.”

Fresh off victory in the Grade I Apple Blossom Handicap at Oaklawn Park April 14, Stellar Wind notched her fifth Grade I victory in the Beholder and improved her overall mark to 14-9-2-1. With the winner’s check of $240,000, she increased her earnings to $2,053,200.

“Our whole deal with bringing her back this year was if she was healthy and training well,” said co-owner Kosta Hronis. “She’s back. Victor’s early move here was the key to the race. This reminded me of running against Beholder…We’re really proud of her.”

In search of her seventh consecutive win, six of them graded stakes, Vale Dori was gallant in defeat and finished 4 ¾ lengths in front of Finest City, who was never a factor after Espinoza’s bold early move.