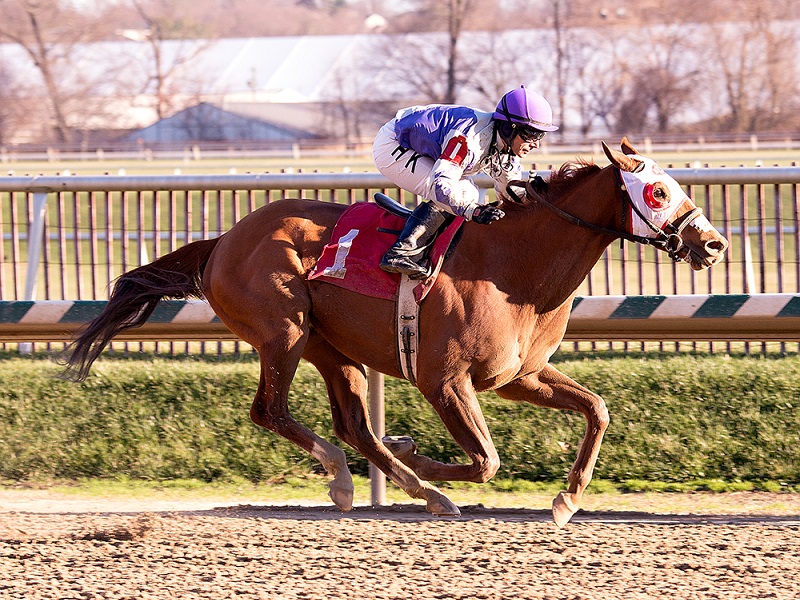 HALLANDALE BEACH, FL – Page McKenney is entered in Saturday’s $100,000 Harlan’s Holiday (G3) at Gulfstream Park for a quest to add another chapter in the remarkable story of the former $16,000 claimer who has gone on to distinguish himself as a multiple stakes-winning millionaire.

The 7-year-old gelding, who had won only 1 of 14 starts when claimed in July 2013, will seek his 20th victory and 14th stakes win for his trainer Mary Eppler and owner Adam Staple in the 1 1/16-mile Harlan’s Holiday, one of five graded stakes on Saturday’s 11-race card.

“There are no words to describe the ridiculousness of this all. I know there are stories you read about – the Seabiscuits of the world – but there is no way you could ever say while remaining in touch with reality, ‘Oh yes, we expected it,’” Staple said.

Page McKenney will seek his first graded-stakes success around two turns in the Harlan’s Holiday. The two-turn specialist won his first graded stakes and first race around one turn in the seven-furlong General George (G3) at Laurel Park in February 2016.

The Pennsylvania-bred son of Eavesdropper will make his Gulfstream Park debut off a rare off-the-board finish in the Nov. 11 Richard Small Stakes at Laurel Park.

“He had some behavioral issues, which is really out of character for him, before the Richard Small Stakes last time out. He couldn’t be a more laidback horse. He just wasn’t himself that day,” said Staple, who graciously sold a 10-percent share in Page McKenney to his breeders/former owners Dr. James Bryant and Linda Davis shortly after claiming him. “He didn’t run a bad race that day. He got stuck between horses, got bounced around the first turn and ran fairly evenly, but he was acting up coming out of the receiving barn and something just wasn’t right.”

“He’s really settled in well. We were expecting him to take his time settling in when he got to Florida, but he settled in very quickly. Everyone’s been impressed how he’s traveling over the track at Palm Meadows,” Staple said.

Unlike Page McKenney, graded-stakes winner Mr. Jordan will enter the starting gate Saturday off one of his career-best performances. The Eddie Plesa-trained multiple-stakes winner registered a stunning 11 ½-length triumph in the Millions Classic Preview at Gulfstream Park West Nov. 11.

The 5-year-old son of Kantharos had previously finished a disappointing eighth behind Page McKenney in the Pennsylvania Derby Championship at Parx – an uncharacteristic performance his trainer attributes to a lack of communication between horse and rider. Ridden for the first time by Edgard Zayas in the Classic Preview, Mr. Jordan couldn’t have offered a more professional performance.

“He shows these flashes. Myself, as a trainer, I can look at his PPs and pretty much sort things out logically why he didn’t run as well as he should. Some of it is that he’s a somewhat peculiar horse to ride. He needs a certain type of rider on him,” said Plesa, noting Paco Lopez was one rider who was able to get the best out of the Florida-bred gelding. “Zayas got along with him fantastically last time. He was one of the reasons why he won so easily. Zayas is a smart rider. He got along with him. Edgard and I spent some time together and went through the replays of his races, still photos and things like that, and he took it to heart and rode him the way he needs to be ridden.”

“He certainly likes that surface over there at Gulfstream Park West. It all clicked, and I expect it to click this Saturday. He’s coming into the race great. I feel very, very comfortable with Edgard back on him,” said Plesa, who trains Mr. Jordan for his wife Laurie, David Melin and Leon Ellman. “I have zero concerns going into this race right now.”

Todd Pletcher-trained Destin is scheduled to drop from Grade 1 company to compete in the Harlan’s Holiday. The 4-year-old son of Giant’s Causeway finished sixth in the Clark (G1) at Churchill Downs Nov. 24, three weeks after winning the Grade 2 Marathon at Del Mar. Destin, who is owned by Twin Creeks Racing Stables and Eclipse Thoroughbred Partners, was on the 2016 Triple Crown campaign after winning the Tampa Bay Derby (G3), and went on to finish second, beaten by a nose by Creator, in the Belmont Stakes (G1).

Kathleen Amaya and Raffaele Centofani’s Fear the Cowboy, who captured the Skip Away (G3) at Gulfstream in March; and Brian Hytrek, Rodney Paden and Ryan Kuhn’s Flatlined, who captured the Fort Lauderdale (G2) over Gulfstream’s turf course in January, are among five graded-stakes winners in Saturday’s field.

Frammento, Conquest Big E, Richard the Great and Joshua’s Comprise round out the field.