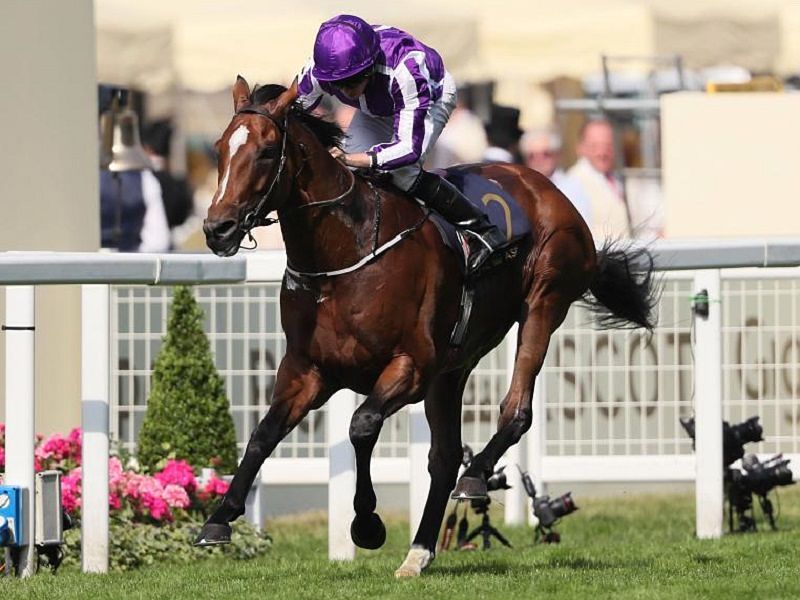 How did the races go Wednesday?  Here’s a quick recap:

This year’s edition of the $110,500 attracted a sizable field of 20, with Godolphin looking to keep its winning ways alive with Dream Castle (bin Suroor/Gordon), who exited a decent 5th place run in the QIPCO 2,000 Guineas.  This class drop, coupled with Godolphin’s Day 1 dominance, made him the public’s 7/2 second choice.  Favoritism went to France’s Le Brivido (Fabre/Boudot), a 9/5 shot based on his runner-up performance in the French Guineas last month.  The public had their choice of two Coolmore runners – 9/1 contender Whitecliffsofdover (O’Brien/Moore) and longshot outsider, Spirit of Valor (O’Brien/O’Brien), who was dismissed at 70/1.  Form held for the top spot as Le Brivido held serve, with Spirit of Valor finishing a surprise second.  Partially the result Coolmore wanted (obviously wins are preferred) but likely not the horse they expected it from.  Le Brivido paid $5.80 to Win and the Exacta returned $301.00

Many considered the Group 2, $135,500 Queen Mary Stakes to be Wesley Ward’s best chance of winning a race at Royal Ascot this year with a two-year-old.  And if that’s the case, he’ll go home proud yet slightly disappointed.  His charge, Happy Like a Fool (Ward/Moore), was hammered to 3/5 odds based on a remarkable maiden victory at Keeneland.  Unfortunately, another runner, Heartache (Cox/Kirby) also exited an impressive maiden win, his by 6-lengths at Bath.  The public thought enough of him to make him the second betting choice at 5/1, however such a significant gap between the favorite and him indicated where their allegiances were.  Ultimately, though, when the real running started, there was no denying Heartache, who overtook Happy Like a Fool and drew off to a 2 ½-length victory.  Credit to Happy Like a Fool, who stayed on well to finish second.  Both appear to have bright futures on the horizon.  Heartache paid $12.20 to Win and the boxed Exacta of favorites returned $28.00.

Even with expected favorite, Laugh Aloud, having been scratched this morning, the $248,000 Group 2 Duke of Cambridge Stakes was still an anticipated event on the docket, especially with defending champion, Usherette (Fabre/Barzalona) out to defend her crown.  The choice among the punters was Qemah (Rouget/Benoist), who was sent postward at 2/1.  Plenty of money came in on the South African, Smart Call (Stoute/Moore), whose 7/2 price was well below her 10/1 morning line.  In the running, Qemah made a bold move to the front several furlongs out to overtake Mix and Mingle (Wall/Buick), a fancied filly who went to the front but couldn’t go on with it.  Longshot Aljazzi (Botti/Kirby) tried to go with Qemah, but ultimately couldn’t keep pace.  She was strong enough to hold off a late-charging Usherette at the wire, as that one found traffic racing in the main group and was hemmed in until too late.  Qemah paid $6.20 to Win, with the Exacta over Aljazzi returning an impressive $194.80.

The day’s most anticipated race, the showdown between Group 1 superstars Highland Reel (O’Brien/Moore), Ulysses (Stoute/Crowley) and Jack Hobbs (Gosden/Buick) in the $922,500 Prince of Wales’s Stakes lived up to all of the hype.  That trio had combined for 16 victories and more than $12 million in earnings.  Sprinkle in defending Breeders’ Cup Filly & Mare Turf winner, Queen’s Trust (Stoute/Peslier), and well-regarded 7-time winner, Decorated Knight (Charlton/Atzeni) and this field left nothing to be desired.  All of the favorites had their chance during the running, but Highland Reel got the best of the bunch, using his early foot to his advantage as he got the jump on the field and held off a game Decorated Knight, who nudged Ulysses for second.  Queen’s Trust rallied to finish third, with the real disappointment being Jack Hobbs, who never mounted a serious threat.  A $2 Win bet on Highland Reel returned $6.00 and the Exacta over Decorated Knight was worth $45.80.

A field of 29 (yes, 29!) went to post in the $215,500 Royal Hunt Cup, a one-mile test for three-year-olds and upward.  As would be expected in a 29-horse field, favoritism was a bit muddled.  The slight public pick was Fastnet Tempest (Haggas/Cosgrove), who went to post at a tepid 6/1.  Can’t complain about any race where the favorite is a $14 horse!  And with just three horses in at less than 10/1, the payouts in this one were going to be spectacular.  Heck, the longest shot on the board – Elleval (Marnane/Orr) – would’ve paid $354 to win!  He didn’t.  However, a longshot did get the job done as Zhui Feng (Perrett/Dwyer) went to the lead and never looked back, scoring a $58.40 Win.  The Exacta, with fellow longshot Blair House (Appleby/Barzalona) in second, paid a robust $1,119.80.

Above I mentioned that Wesley Ward’s best two-year-old hope of Royal Ascot was defeated in the Queen Mary Stakes.  But that didn’t stop him from scoring one of his most surprising results, as Con Te Partiro (Ward/Spencer), a 19/1 outsider not even fancied by US backers, got the job done by 1 ¼-lengths over Coolmore’s Rain Goddess (O’Brien/Moore), who was sent to post as the 6/1 second choice.  Con Te Partiro’s win was considered especially surprising, as the three-year-old daughter of Scat Daddy was just 2-for-6 in her career, and had dropped three straight decisions.  Her win backers were rewarded with a $41.60 payday, with Exacta bettors receiving $198.40 for their winning bets.

Join us Thursday for more action at Royal Ascot, which ones again presents four graded races for your consideration.  The lone Group 1 event is the Gold Cup, while supporting stakes are the Group 2 Norfolk, Group 2 Ribblesdale and Group 3 Hampton Court.  First post is 9:30AM ET.