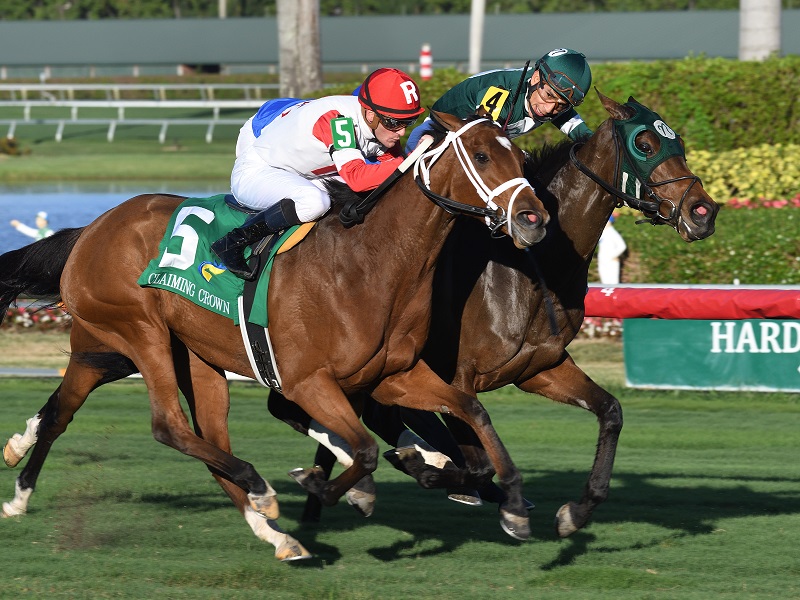 HALLANDALE BEACH, FL – Martini Glass has one of the most impressive resumes in the field of the 12 fillies and mares entered to run in Saturday’s $75,000 Via Borghese Stakes over the Gulfstream Park turf course, but the multiple Grade 1 stakes-placed filly definitely has the most diversified body of work.

Martini Glass, who won the $125,000 Claiming Crown Tiara over the Gulfstream Park turf course Dec. 2, has blossomed during her 4-year-old campaign, during which she finished second behind Songbird in the Delaware (Park) Handicap (G1) and second behind Romantic Vision in the Spinster (G1) at Keeneland, both on dirt.

“She’s probably better on dirt, but there just doesn’t seem to be many dirt races going two turns right now for fillies and mares,” Nations said.

Martini Glass was claimed by Nations and Vince Campanella for $16,000 out of a winning debut at Tampa Bay Downs in February 2016.

“We had seen her training in the morning and heard some things that she could be OK. We took a flyer to be honest,” said Nations, who had to win a shake to add her to his stable roster. “We weren’t the only ones who had an eye on her.”

The daughter of Kitalpha (an unraced half-brother to Kingmambo) went on to win her first two starts for her new connections and has continued to improve with maturity.

“When we first claimed her she was big, gangly – lean and gangly. She had a lot of maturing to do, but when we ran her the first time she ran great and we were pretty excited,” Nations said. “We thought we might have something.”

Martini Glass has won eight of 18 starts since being claimed while earning in excess of $450,000. Her most impressive performance came in the 1 ¼-mile Delaware Handicap, in which she made a strong stretch bid before settling for second behind multiple champion Songbird.

“Realistically we were hoping to finish second or third. We didn’t think she could outrun Songbird, obviously, but she gave us a scare. I couldn’t be more thrilled,” Nations said. “In mid-stretch, it looked like she had a chance to win that race against that filly. It was pretty thrilling.”

Jose Ferrer was aboard Martini Glass in the Delaware Handicap before being sent to the sidelines with an injury. Paco Lopez has been aboard for her second-place finish in the Spinster and her victory in the Claiming Crown Tiara.

Lopez has the return mount for the 1 3/16-mile Via Borghese, but Ferrer was aboard for Martini Glass’s five-furlong breeze in 59 1/5 seconds at Tampa Bay Downs last Friday.

“He worked her the other day. He said, ‘Not only is she getting bigger and stronger, but she’s just getting better and better,’” Nations said. She’ll have to be to tackle this group. It looks like five or six horses in there that can win this race.”

Rebecca Hillen’s Beauly is scheduled to make her first start since finishing fourth, beaten 1 ¼ lengths by victorious War Flag, in the Flower Bowl (G1) at Belmont Oct. 8. The Brian Walsh-trained 4-year-old filly has won two of six starts since being imported from Great Britain, including a victory in the Indiana General Assembly Stakes at Indiana Grand. Leading rider Luis Saez has the mount.

Trainer Chad Brown has entered Galileo’s Song and Texting, a pair of 4-year-old fillies who finished second and third, respectively, in the Long Island Handicap (G3) at Aqueduct Nov. 4. Dell Ridge Farm’s Galileo’s Song, who also finished second in the Boiling Springs (G3) at Monmouth in July, will be seeking her first stakes success. Joel Rosario has the mount. The Long Island Handicap was the stakes debut for Sarah Sharp Farish’s Texting, who will be ridden by John Velazquez.

Trainer Christophe Clement also entered a pair of fillies in the Via Borghese: Newsells Park Stud’s Playful Sound and Cheyenne Stables’ Taralena. Playful Sound, a multiple-stakes winner in England, finished sixth in the Long Island Handicap in her U.S. debut. Tyler Gaffalione has the mount on Playful Sound, while Nik Jaurez will ride stakes-placed Taralena.

Bill Mott-trained Flipcup, who finished a close third in last year’s Via Borghese for owners Team Penny Racing and Wachtel Stable; Stronach Stables’ Involuntary, a stakes winner who finished third in the Maple Leaf (G3) at Woodbine last time out; and Glen Hill Farm’s Promotional, who most recently finished second in the Dowager (G3) at Keeneland Oct. 22; are among the leading contenders.

Daring Duchess, Eqho and Downton Kitten round out the field.