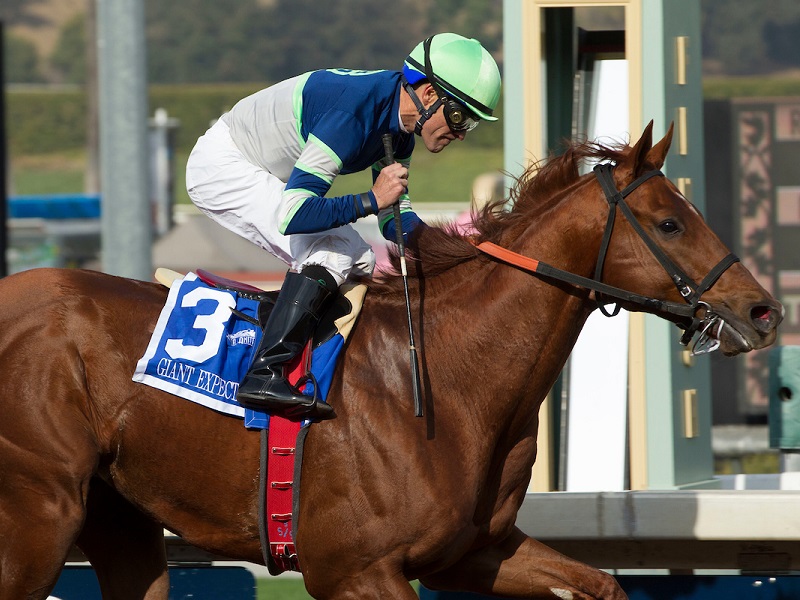 ARCADIA, Calif. (Dec. 26, 2017) – Hold the presses.  Bob Baffert’s Collected, considered by many to be the second-best horse in America and a likely starter in next month’s Grade I, $16 million Pegasus World Cup Invitational at Gulfstream Park, was nowhere to be found at the finish of Tuesday’s Grade II, $300,000 San Antonio Stakes at Santa Anita.

Run for the first time in its 81-year history on opening day, the San Antonio was taken by the longest shot in a field of five–the Peter Eurton-trained Giant Expectations, who coasted to an emphatic 3 ¼ length win while covering a mile and one sixteenth in 1:43.07.

The ageless Stevens, who has committed to riding at Oaklawn Park after Jan. 1, appeared to make an easy lead and held sway by about a length over a hard-ridden Prime Attraction and Accelerate, neither of whom could get on terms with the winner who was well beaten at 25-1 in his most recent start, the Grade I Breeders’ Cup Dirt Mile on Nov. 3.

A 4-year-old New York-bred colt by Frost Giant, Giant Expectations is owned by Border Racing, LLC, Gatto Racing, LLC and Zubok.  A winner of the seven furlong, Grade II Pat O’Brien Stakes three starts back on Aug. 26, Giant Expectations notched his fourth win from 13 overall starts and with the winner’s share of $180,000, he increased his earnings to 449,200.

Off at 8-1 under Javier Castellano, Accelerate finished a neck in front of Collected and paid $7.00 and $2.80.

Last early, Collected was never a factor for the win and finished a half length in front of Hoppertunity.  Ridden by Mike Smith, Collected was off at 1-5 and paid $2.10 to show.

Note:  The win marked Stevens’ second-ever win in the San Antonio, as he won it for the first time with Point Given in 2001.