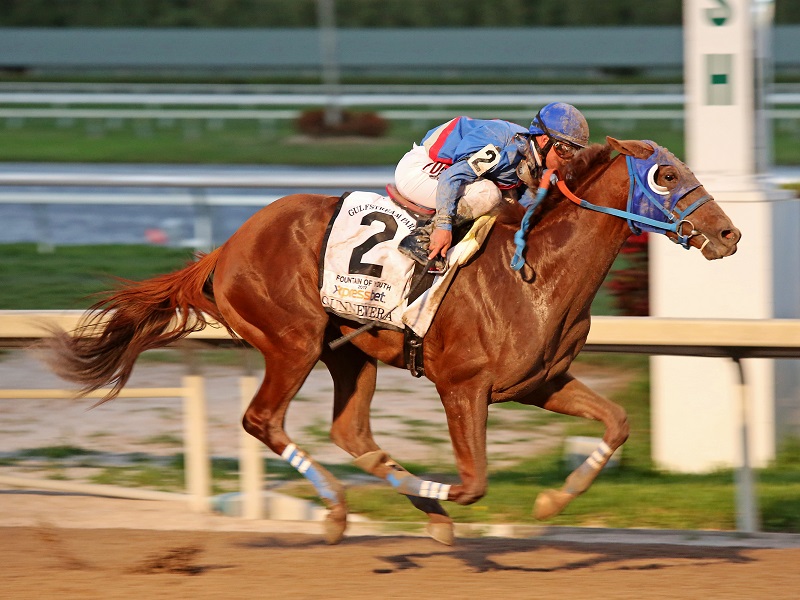 Venezuelan owner Salomon Del-Vallee has reached a deal with Pegasus stakeholder William Gallo of Gallo Stables and Bella Inizio Farm to run Gunnevera in the second edition of the unique and ground-breaking event on Jan. 27, 2018.

“We are excited to be partnering with the connections of Gunnevera,” Gallo said. “Part of our business diversification is to find innovative and forward-thinking investments within the industry, such as the Pegasus World Cup.”

Gunnevera will remain in the Gulfstream Park West barn of trainer Antonio Sano and train up to the 1 1/8-mile Pegasus for 4-year-olds and up, which will be supported by seven stakes, four graded, worth $1.025 million in purses.

“Mr. Gallo has made a commitment throughout the industry and feels innovative concepts are vital to growth and success,” said Gulfstream Park-based trainer Jena Antonucci, Gallo’s spokesman and partner in Bella Inizio Farm. “We are thankful to those involved in seeing this opportunity come together, and can’t wait to root Mr. Sano, Mr. Del-Vallee and Gunnevera to victory.”

The vision of Frank Stronach, Founder and Honorary Chairman of The Stronach Group, is the first event of its kind in Thoroughbred racing and is designed to promote the sport of horse racing while creating a lucrative opportunity for owners of world-class Thoroughbreds.

“The future is bright for Gunnevera, and we are excited to run in the Pegasus and partner for this great race,” Del-Vallee said.

Gunnevera owns five wins and $1,627,200 in purse earnings from 14 lifetime starts. In his most recent effort, he finished in a dead heat for fifth in the Breeders’ Cup Classic (G1) with Arrogate, impressive winner of the historic inaugural running of the Pegasus World Cup over a field that included two-time Horse of the Year California Chrome.

Three of Gunnevera’s wins have come at Gulfstream – his maiden triumph in July 2016 and the Fountain of Youth (G2) and Tangelo Stakes this year. He also finished  third in the Florida Derby (G1). During the Triple Crown he was seventh in the Kentucky Derby (G1) and fifth in the Preakness (G1).

Gun Runner, the Breeders’ Cup Classic winner expected to be crowned 2017 Horse of the Year at the 47th annual Eclipse Awards ceremony Thursday, Jan. 25 at Gulfstream Park, will make his final career start in the Pegasus World Cup.

“We are very excited to partner with Mr. Gallo for the opportunity to win the Pegasus World Cup,” Sano said.