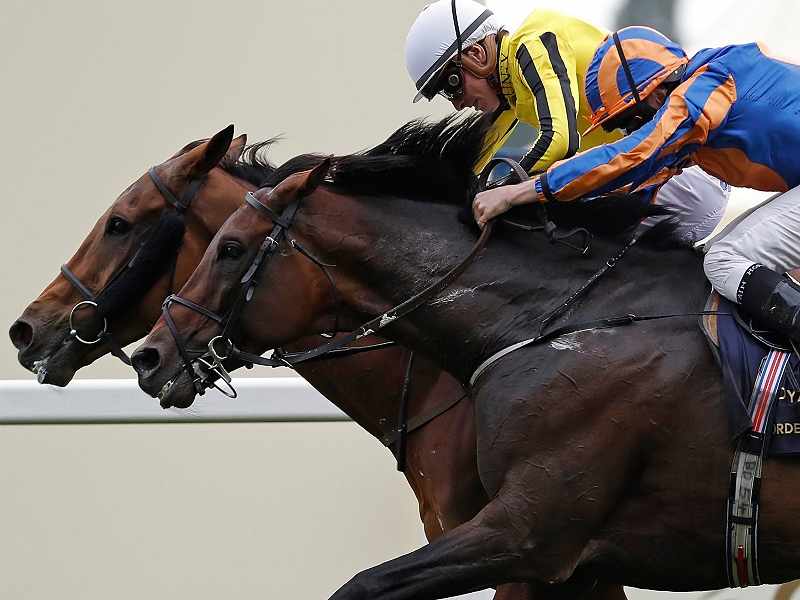 How did the races go Thursday?  Here’s a quick recap:

Through two days of the Royal Ascot meet, leading jockey, Ryan Moore, was off to a relatively mediocre start.  At least by his standards.  On Opening Day, he was aboard the beaten favorites, Churchill and Declarationofpeace, and on Wednesday his disappointment continued aboard heavy favorite, Happy Like A Fool, who was also defeated.  Through two days at Ascot, he was just 2-for-12 with one stakes score, which came aboard Highland Reel in the Prince of Wales’s.  As an aside, kind of impressive when you’re having a ‘tough’ start to a meet when you’ve ‘only’ ridden one Group 1 winner.  Thursday’s opener was the Group 2, $123,000 Norfolk Stakes, which attracted a well-matched group of 17 runners.  The very tepid favorite was American shipper, McErin (Ward/Flores), who went to post at 9/2 odds on the heels of a decent Keeneland maiden win and a close-up second in a stakes race at Churchill Downs.  The local favorites were Santry (Carroll/Crowley), It Don’t Come Easy (Fahey/Hanagan) and Havana Grey (Burke/McDonald) for this 5-furlong turf dash.  Moore was aboard the relatively forgotten Sioux Nation (O’Brien/Moore), who was a surprising 16/1 on the board, given his regarded connections.  But (as I’m sure you figured by now), the Coolmore-owned two-year-old son of Scat Daddy gave Moore his third win of the meet, returning $35.00 and keying a $295.00 Exacta over Santry.  Ward’s McErin atteneded to the early pace but ultimately tired to finish 7th.

The Group 3, $110,500 Hampton Court Stakes was up next for three-year-olds, with several key runners exiting tougher spots.  Ballygallon Stud’s Irishcorrespondent (Halford/Foley) was exiting a 3rd place finish in the Irish 2,000 Guineas, while Coolmore’s Orderofthegarter (O’Brien/Moore) had most recently run in the Group 1 Prix Du Jockey Club at Chantilly in France.  Taj Mahal (O’Brien/Heffernan) also exited that race, and Godolphin’s Benbatl (bin Suroor/Murphy) was most recently 5th in the Investec Derby at Epsom Downs.  The running was contentious, with several key runners appearing to have a shot.  But, within the final furlong, Benbatl kicked clear and dug in to hold off a late charge Orderofthegarter, whose second place finish continued Ryan Moore’s strong start to Thursday’s card.  Benbatl paid $11.00 to Win and the Exacta returned $42.60.

The first Group 1 event on the card was the $264,500 Ribblesdale Stakes, and the public made a huge statement by betting Juddmonte’s Mori (Stoute/Smullen) and Coolmore’s Alluringly (O’Brien/Moore) early and often.  That tandem went off at odds of 9/5 and 2/1, respectively.  Sounds like an open-and-shut case, right?  Not so fast.  As things often go in horse racing, while all eyes were on those three-year-old fillies, an under the radar runner – Coronet (Gosden/Peslier) – jumped up and stole the show.  Dismissed at 9/1 odds (off a 5/1 morning line), Coronet rocketed down the outside to pass Mori in the shadow of the wire, keying a $20.80 Win payout and $69.80 for lucky Exacta bettors.  The key disappointment was Alluringly, who never quickened and finished 6th of 12 runners.

The richest race of the day, the $492,000 Gold Cup, was also the most exciting.  Run at 2 ½-miles on the turf, the Gold Cup attracted last year’s winner, Order of St. George (O’Brien/Moore), as well as popular runners Sheikhzayedroad (Simcock/Harley), Big Orange (Bell/Doyle) and Simple Verse (Beckett/Murphy).  Prior accolades brought plenty of money to Order of St. George’s corner, as he was sent off as the 4/5 favorite.  Big Orange was second choice at 9/2.  From the outset, Big Orange set the running with Order of St. George sitting near the back of the pack.  When the field turned for home, Big Orange kicked to an open lead and while Order of St. George rallied stoutly down the outside, he was never quite able to get his nose in front.  He got desperately close – the two were separated by an inch at the wire – but Big Orange would simply never let him go by.  Big Orange paid $11.80 to Win and the Exacta of favorites returned $23.20.

Longshots were the name of the game in the 30-horse Britannia Stakes, which was contested over one-mile.  The race proved the be the cavalry charge that most handicappers anticipated it would be, with Jamie Spencer ultimately scoring his second longshot victory in as many days aboard Bless Him (Simcock/Spencer) at odds of nearly 25/1.  Ronald R (Bell/Tudthorpe) got 2nd, with the lukewarm 9/2 favorite, Son Of the Stars (Hannon/Murphy) checking in 11th.

Ascot’s nightcap was the $110,500 King George V Stakes for three-year-olds going 1 ½-miles.  And, as has been the storyline for much of the meeting, Godolphin’s remarkable run of success continued at Ascot as Atty Persse (Charlton/Shoemark) exploded down the stretch en route to a powerful victory at odds of 6/1 on the Tote.  He paid $15.00 to Win.  First Nation (Appleby/Buick) desperately held off the late-charging Bear Valley (Johnston/McDonald) for second, keying a $154.80 Exacta.

That’s it for Day 3 at Royal Ascot!  Join us Friday and Saturday at 9:30AM ET for more great racing.  Friday’s card features a number of top runners from the Wesley Ward barn, as well as Mark Casse’s three-year-old turf filly sensation, La Coronel.