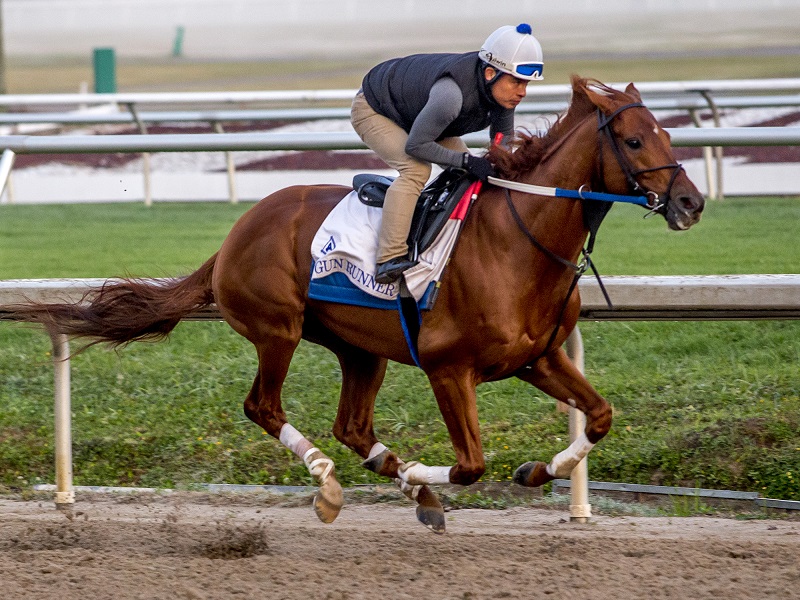 Working in company with regular workmate Gettysburg, Gun Runner was clocked galloping out seven furlongs in 1:23.40 and the mile in 1:37 under jockey Florent Geroux as they prepare for the January 27th World Cup. The Fair Grounds clockers timed his interior splits as 12.30 seconds, 24.20, 36.10, 48.10 and 59.20. The final furlongs in 11 1/5 and 11 3/5 are trainer Steve Asmussen covets. Gun Runner started off a little more than a length behind Gettysburg, pulled alongside on the turn and drew off in the stretch.

Because of cold temperatures in New Orleans, Gun Runner worked a few minutes after noon Central. The workout was aired live on TVG2, which is where David Fiske, the longtime racing and bloodstock manager for co-owner Winchell Thoroughbreds, saw the display while in frigid Kentucky.

“That was great,” he said. “That was kind of a typical two-weeks-before-the-race Asmussen work. Usually that’s a big work, kind of sharpen them up. He’ll get another easy half-mile when he gets to Gulfstream, probably next Monday or something. But man, he looked pretty sharp to me.”

Gun Runner is to fly to Fort Lauderdale on Thursday.