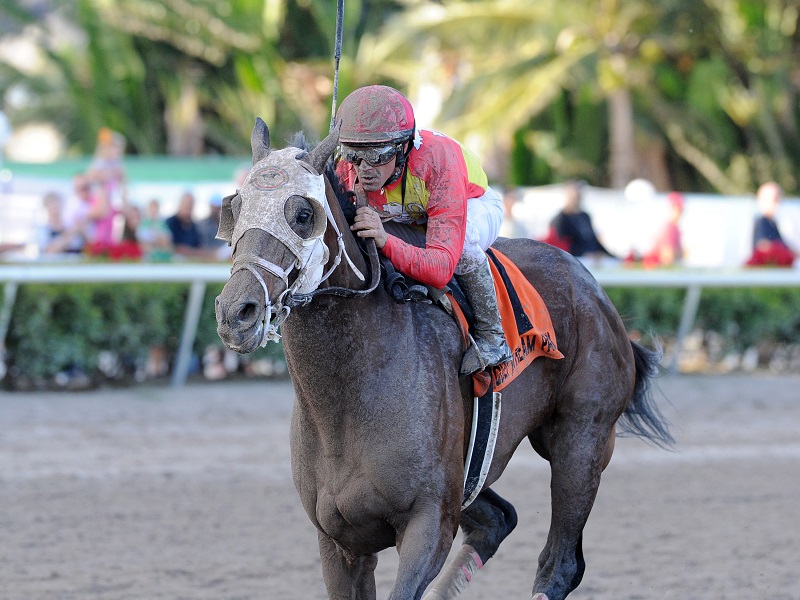 “[The Pegasus World Cup] is a tough race, but we are open to probably taking a chance, because on this track he runs well,” said trainer Efren Loza Jr., indicating that the multiple graded-stakes winner may well be made available to a Pegasus Word Cup stakeholder looking for a horse.

Fear the Cowboy ($9) captured his fourth victory and second graded-stakes triumph in six starts over Gulfstream’s main track Saturday under a classic Javier Castellano ride. Rated off the pace and saving ground as Conquest Big E pressed early pacesetter Mr. Jordan during a quick first quarter of a mile in 23.37 seconds before taking the lead past a half mile in 46.20. Mr. Jordan re-engaged Conquest Big E leaving the backstretch and took the lead leaving the turn into the homestretch under Edgard Zayas. The striking gray son of Kantharos continued to battle on through the stretch but was no match for Fear the Cowboy, who made a wide sweep on the turn into the stretch and powered to victory.

“It was a combination of a lot of speed in the race, and all the horses moved forward early into position. I was able to move inside and save all the ground and wait. Turning for home I saw all the horses start to come back right in front of me so I moved outside and the way he finished was phenomenal,” Castellano said. “He’s a very professional horse, very straightforward. I’ve been watching his races and the way he runs.”

Fear the Cowboy ran 1 1/16 miles in 1:42.23 to win his ninth race in a career that has brought him to 12 racetracks, from Gulfstream Park to Sunland Park. Mr. Jordan hung on gamely to finish second, a neck in front of Destin, the 7-5 favorite who was ridden by John Velazquez.

Fear the Cowboy captured the Skip Away (G3) by three lengths at Gulfstream Park in May and had run in six stakes over six different tracks before returning to the Hallandale Beach track for Saturday’s win.

“He’s an amazing horse. He’s traveled a lot these years. Two days ago, we had to decide to ship him her or New Orleans (for the ungraded Tenacious Stakes at Fair Grounds), but he loves Gulfstream. The first time ridden by Javier – he did a good job,” Loza Jr. said.

The 5-year-old son of Cowboy Cal, who was bred by the University of Kentucky, has finished first or second in 16 of 27 starts, earning more than $570,000.