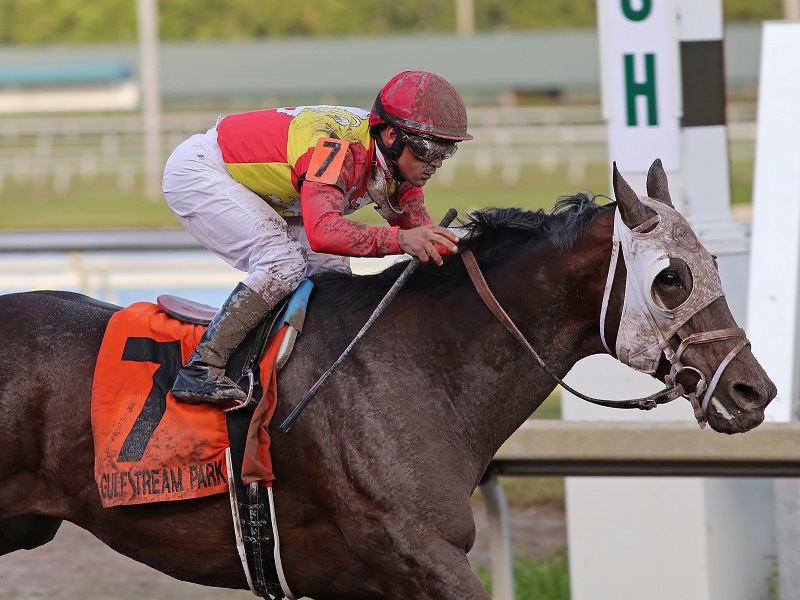 HALLANDALE BEACH, FL – Well-traveled Fear the Cowboy, a three-time stakes winner at Gulfstream Park, has been confirmed as the 11th starter in the $16 million Pegasus World Cup Invitational (G1) to be run on Saturday, January 27.

A total of 12 runners will go to the gate for the second edition of the Pegasus, the world’s richest race. Gun Runner, the likely Horse of the Year, heads a strong field that features six Grade 1 winners.

Fear the Cowboy, co-owned by Raffaele Centofanti and Kathleen Amaya, will run in the Pegasus for the partnership of Stronach Stables, and Ronald and Jerry Frankel.  The 6-year-old son of Cowboy Cal trained by Efren Loza, Jr. had a strong 2017 season compiling a 4-3-1 record in 10 starts. Two of those victories last year came in stakes at Gulfstream Park, the Skip Away (G3) on March 25 and the Harlan’s Holiday (G3) on Dec. 16.

The Pegasus will be the first start in a Grade 1 race for Fear the Cowboy. Since Loza took over the training of the horse early in 2015, he has started at 12 tracks in nine states. Loza welcomes the opportunity to run his road warrior in the top-level international event.

“It’s a really tough race,” Loza said. “Our horse is really in good form. He loves Gulfstream. I know this is a big challenge, but our horse is in the peak form of his career.  He’s a horse who when you put him in with good competition he will work hard. He’s the kind of horse who puts in enough effort to make a good race.”

Loza, 33, grew up in Mexico City, learned the business from his father, who trained for about 40 years, and moved to the U.S. in 2012. He started out breaking and developing younger horses in Ocala and opened his own stable in 2013. Fear the Cowboy is his first graded stakes winner.

“Everybody wants to be in the big races. I feel very grateful and very, very excited to be there,” Loza said. “It’s a really good challenge for me to run with the best horses in the country, good trainers, and good jockeys. That is a good thing for me and for everybody involved in the race. It’s a big race.”

Loza said that Fear the Cowboy will breeze Saturday in Ocala and ship to Gulfstream Park on Jan. 24. He expects that the jockey for the Pegasus will be named by this weekend.