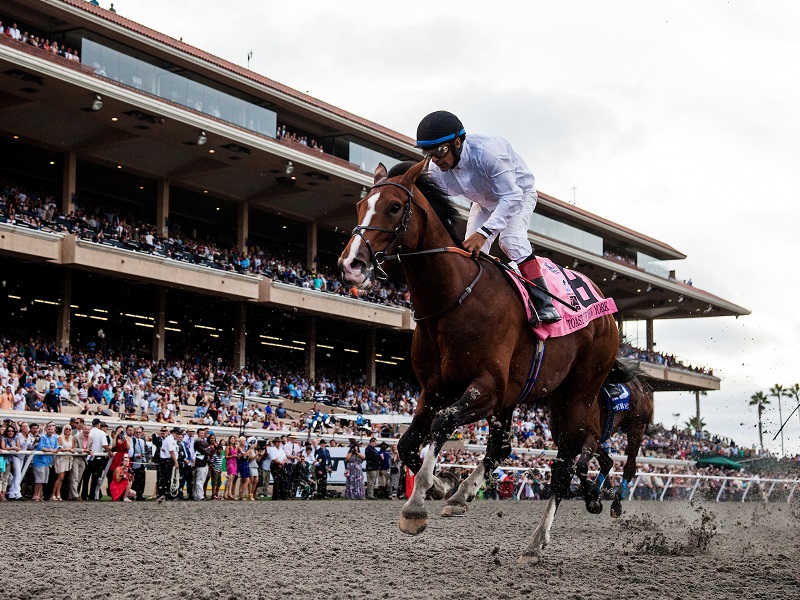 HALLANDALE BEACH, FL – There is no question that Toast of New York has taken the most unconventional path of the 12 horses headed to the $16 million Pegasus World Cup Invitational (G1), the world’s richest race Saturday, Jan. 27 at Gulfstream Park.

It’s not even close.

In a remarkable turnabout, Toast of New York, a 7-year-old son of Thewayyouare, has:

Toast of New York won a 1 ¼-miles comeback race at Lingfield on Dec. 6 and is scheduled to ship from England to South Florida over the weekend. He will take on a strong field of graded-stakes winners in the Pegasus headed by Gun Runner, who is expected to be named Horse of the Year at the Eclipse Awards on Jan. 25.

“It’s totally unique. I’ve never come across it before,” said veteran horseman Harry Herbert, Al Shaqab’s racing manager from Australia. “I’m sure people have tried and maybe tried but failed. I don’t know who has succeeded after this sort of delay.”

Al Shaqab is the international racing stable owned by Shiekh Joaan Al Thani, the brother of the ruler of Qatar. Toast of New York will compete in the Pegasus World Cup for the stakeholder group of Reeves Thoroughbred Racing, R.A. Hill Stable, and Eric Young.

When last seen in the U.S., Toast of New York was finishing a nose behind Bayern in the 2014 Breeders’ Cup Classic (G1) at odds of 18-1. That performance capped a fine season in which the British-based, Jamie Osborne-trained colt won the UAE Derby (G2) and finished second to Shared Belief in the Pacific Classic (G1). Shortly after the Breeders’ Cup, Al Shaqab purchased Toast of New York to run him in the 2015 Dubai World Cup (G1).

“In preparation for the World Cup he got a slight tear in a tendon,” Herbert said. “That was pretty disastrous and trying to bring him back really didn’t work. In the end it was decided to retire him.”

Toast of New York was sent to Al Shaqab’s breeding farm in Dohar, Qatar, where he covered approximately 15 mares during the 2016 breeding season, getting 10 of them in foal. Herbert credits Duncan Moir, a veterinarian who works for Al Shaqab, with the idea of returning Toast of New York to competition.

“We took the view of getting him back to the UK, and take a look at him and see how he was and how that tendon was to possibly sending him back into training,” Herbert said.“This was going on under the radar with all of this and thinking ‘We’ve probably got no chance, but let’s just give it a look.’ “

Toast of New York was sent to Longholes, a layup and pre-training center near Newmarket owned by Sheikh Joaan’s cousin, Sheikh Fahad.

“It’s a very good rehabilitation and they do a phenomenal job there,” Herbert said. “Bit by bit, the weight came off him and the exercise increased and the view was taken by Duncan Moir that he should go back into training with Jamie Osborne. Really, I think with the thinking that it is going to be a hell of a long shot to get him back racing.”

Though the odds of that type of return after more than than 1,000 days between races were long, Toast of New York was 2-1 in the wagering when he showed up Dec. 6 at Lingfield. Wearing blinkers for the first time and carrying 130 pounds, he won by one length under Al Shaqab’s first-call jockey Frankie Dettori, who will ride him in the Pegasus World Cup.

“Jamie has done the most remarkable job with the horse, very patient with a very, very gradual buildup into the race at Lingfield,” Herbert said. “It might not have been the greatest race in the world, but the horse had been off three years, had covered mares, had come back and won a stakes race. In itself, that was a remarkable feat.”

Rather quickly, the plan to take a swing at the Pegasus World Cup began to take shape.

“Jamie kept saying, ‘Look, I don’t think we’re anywhere near the bottom of this horse and my gut feeling is that he is every bit as good or better than when he was last in training,’” Herbert said. “So, here we are a couple of weeks away from the potential of running for a huge pot and back in the States where his glory days were three years ago.”

Herbert estimated that Toast of New York was about 80 percent fit for the race on the artificial surface at Lingfield. The decision was made to train him up to the Pegasus World Cup.

“Now he is fitter still,” Herbert said. “He’s going very well. He’s moving great. Touch wood he gets through the next couple of weeks and then it’s in the lap of the gods. Certainly, physically, the way the horse is going, the trainer could not be happier. It’s a very exciting prospect to see him back on the big stage.”

The addition of Toast of New York, who was bred in Kentucky, developed in England and has proven to run very well on dirt in Dubai and the U.S., brings an international angle to the world’s richest race.

“There is a huge amount of good will around this horse,” Herbert said. “I think anyone involved in racing would really wish him well and hopes he runs a big race and comes back safe. These stories don’t happen very often. To have got this far, it’s a wonderful, wonderful tale. Racing surprises all the time. There is always something. There is always another story around the corner, but this is pretty unique one and just to have him turn up and run, and hopefully run a decent race and come back safe and sound, will be a triumph in itself.”