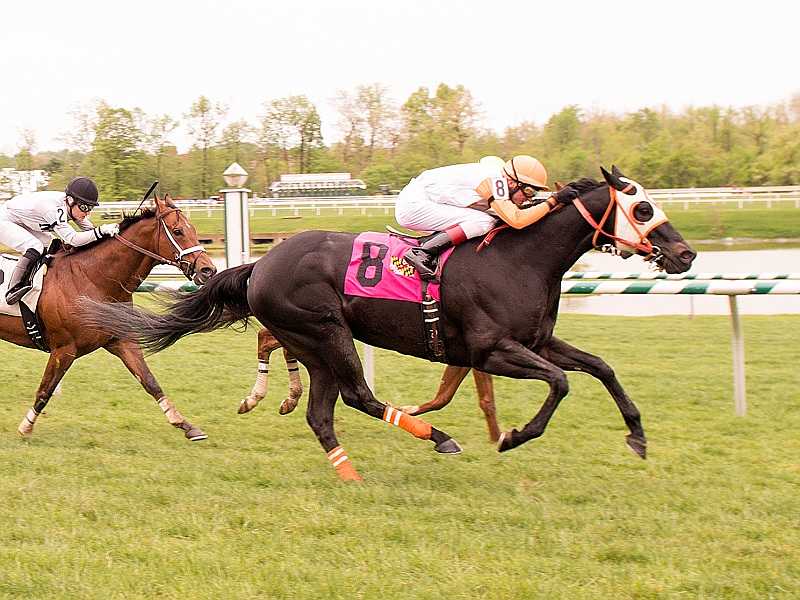 The 34th running of the Mister Diz for 3-year-olds and up and 30th running of the $75,000 Jameela for fillies and mares 3 and older, both six-furlong sprints on the Fort Marcy layout restricted to Maryland-bred/sired horses, are two of six stakes worth $450,000 in purses on the 11-race ‘Class on the Grass’ program.

Bred, owned and trained by Hall of Fame horseman King Leatherbury, Ben’s Cat suffered his seventh consecutive defeat when eighth in the Jim McKay Turf Sprint May 19 at historic Pimlico Race Course, a race he had won four straight times and five of the previous six years.

Ben’s Cat has had a similar hold on the Mister Diz, having won six straight editions from 2010-15 before being upset by John Jones last year, finishing third as the favorite.

“We’ve got to run in that race. I mean, he’s expected to be in there. We’re going to be running,” Leatherbury said. “Like other years, I love him and this year he’s approaching the question mark of retirement. We’re certainly going to run in this race and we’ll go from there.

During his dry spell, Ben’s Cat has not been beaten by more than 4 ¼ lengths in six grass starts; the lone exception was a disappointing effort in the Maryland Million Sprint contested on dirt. Nine of his 32 career victories have come at the Mister Diz distance.

“He didn’t get beat by much, but he didn’t get anything and that’s the main thing. We always have little excuses,” Leatherbury said. “When you win, you don’t even think about excuses. When you get beat, and I’m not an excuse man, there’s something like the rider commenting on him handling the surface. He didn’t seem to be getting over it really well last time, but like I say that’s an excuse. You can only make excuses for so long and you have to face reality.”

Horacio Karamanos, fresh off his 2,000th career victory Sunday at Laurel, replaces the injured Trevor McCarthy aboard Ben’s Cat for the Mister Diz from Post 10. One of just six jockeys to ride Ben’s Cat in his 62-race career, Karamanos has one win from two previous tries in the 2012 Mister Diz.

Not including his race debut May 8, 2010 at Pimlico, Ben’s Cat has won seven of the nine races when Leatherbury has made a rider change, including the Mister Diz in 2010 with Rosemary Homeister Jr. and 2011 with Jeremy Rose. The most recent came May 1, 2016 when Ben’s Cat captured an open allowance in his 10-year-old debut under McCarthy, aboard for each of the past nine starts.

“He came out of the last race fine, and he’s doing OK,” Leatherbury said. “I’m not as optimistic as I usually am, but we’ll see.”

Among the 11 horses entered to face Ben’s Cat is Hillwood Stable’s Phlash Phelps, back-to-back winner of the one-mile Maryland Million Turf in 2015 and 2016 making his 6-year-old debut. The bay Great Notion gelding has not raced since being beaten a nose in a third-level optional claiming allowance Nov. 19 at Laurel.

Trainer Rodney Jenkins typically gives his turf horses the winter off and Phlash Phelps spent four months at Dark Hollow Farm before returning to training. He shows a steady string of breezes at Laurel for his return.

“He’s doing very well. He’s ready to run. I don’t know if sprinting is his game, but that’s OK. We’ll get a race under him and go from there,” Jenkins said. “He looks good and he’s acting good. He’s like the old Phlash Phelps.”

Phlash Phelps hasn’t sprinted since breaking his maiden going five furlongs April 23, 2015 at Pimlico in his seventh start. Regular rider Victor Carrasco, the leader of the current summer meet, has the call.

“I think he should show natural speed. He always does,” Jenkins said. “If he’s in striking distance he should give them a good run to the wire.”

Also entered in the Mister Diz are multiple stakes winner Sonny Inspired; stakes winners Eyeplayeveryday and Talk Show Man, the latter exiting a fifth-place finish in the Dixie (G2) May 20; and stakes-placed English Minister, Grandiflora and Rockinn On Bye.

Multiple stakes winner Lovable Lady will face 10 rivals when she makes her return to the turf in an attempt to defend her title in the $75,000 Jameela.

Lovable Lady, trained by Mary Eppler for the Samuel H. Rogers Jr. Trust, has not raced on grass since the Jameela last August, winning by a half-length over Everything Lovely. In her most recent start, the six-furlong Skipat May 19 at Pimlico, she drew the rail and was fifth by 2 ½ lengths after chasing the pace over a sloppy, sealed main track.

A 6-year-old daughter of Not For Love, Lovable Lady has been worse than third only three times from 20 career starts with $369,645 in purse earnings for her late owner-breeder. Only two of her races have come on grass.

“I think that she’s very good on the turf. I would actually love to run her on the turf all the time but the races don’t come up,” Eppler said. “She just likes it, that’s all I can say. A lot of the Not For Loves like the grass. The only thing I do different is change her shoes, and she’s good to go.”

Lovable Lady won the Politely and Willa On the Move on dirt last year and was second or third in three other stakes, beaten a total of 3 ½ lengths. In her other 2017 starts she was third in the What A Summer and second in the Primonetta at Laurel, both contested over off tracks.

“She’s very tough to deal with. She runs and she runs well but she can be a hard horse to be around,” Eppler said. “I think there’s this one and maybe one more race and then we’re going to retire her and she’ll be sold in November. She really has been good for us.”

Second by a half-length after taking the lead into the stretch in last year’s Jameela, Everything Lovely became a stakes winner for the first time with a front-running triumph in the $100,000 The Very One May 20 at Pimlico. She in winless with three seconds in four career tries at six furlongs, the last coming in the 2016 Jameela.

Rockin’ Jojo has made one start this year, fading to fifth in a second-level allowance against fellow Pennsylvania-breds May 29 at Parx. It was her first race since winning the Geisha by a head Nov. 19 at Laurel, her second straight win over Lovable Lady following the Maryland Million Distaff at odds of 31-1.

Devilish Love, winner of the Maryland Million Ladies last October making her 7-year-old debut; 2015 Maryland Juvenile Filly Championship winner Look Who’s Talking; stakes-placed Daylight Ahead and If I Was a Boy; and Holiday Blues, Le Weekend, My Sistersledge and Thissongisaboutyou complete the field.