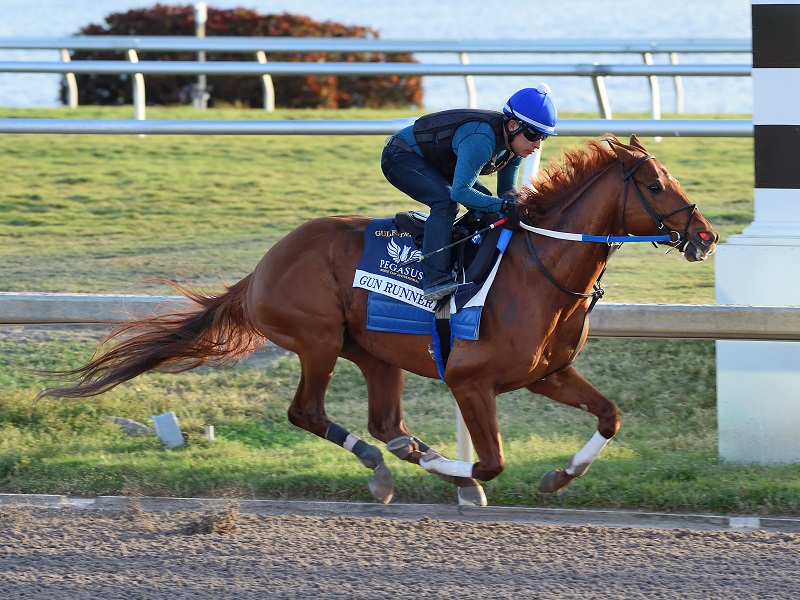 HALLANDALE BEACH, FL - In his typically professional manner Monday, Gun Runner turned in the last timed workout for his career finale in the Saturday’s $16 million Pegasus World Cup Invitational (G1) with a half-mile breeze in :49 at Gulfstream Park.

Gun Runner, co-owned by Winchell Thoroughbreds and Three Chimneys Farm, will be the morning line favorite in the Pegasus World Cup, the world’s richest race. He brings a four-race winning streak, all in Grade 1 races, into the 1 1/8 race at Gulfstream Park.

With exercise rider Angel Garcia aboard on a track closed for his workout at 7:30 a.m., the 5-year-old son of Candy Ride worked from the half-mile pole to the finish line. He galloped out five furlongs in 1:02.11.

“I loved how he did it,” said Scott Blasi, chief assistant to trainer Steve Asumssen. “Angel was really happy with him and said, ‘I never asked him to do anything.’ “

Gun Runner won the Breeders’ Cup Classic (G1) at Del Mar Racetrack on Nov. 4 and has been training for the Pegasus World Cup at Fair Grounds in New Orleans. He shipped to Gulfstream Park on Jan. 18 and, following Asmussen’s playbook, had his final breeze over the track he will compete on. Blasi said that Gun Runner handled the shipping to South Florida and the new surface without incident.

“He’s just been really special to us and he continues to do exactly what you want him to do,” Blasi said. “It’s kind of unheard of over a three-year career. I’m just really happy with how he got over the ground. He’s cooling out great and is ready for Saturday.”

Blasi acknowledged that it can be difficult to judge Gun Runner’s workouts visually because of his smooth running style.

“That’s just kind of Gun Runner. He just does stuff so effortlessly,” Blasi said. “You think that he’s not going anywhere, then you look down at your watch and you’re like ‘Wow.’ Especially this year he has gotten stronger and faster. There’s just a lot more to him. We couldn’t be happier with him.”

Gun Runner has won 11 of 18 career starts and earned $8,988,500. A victory in the Pegasus World Cup, worth $7 million, would move him into second place in career earnings for a horse based in North American, behind only Arrogate, who won the 2017 Pegasus. Gun Runner is scheduled to retire after the Pegasus World Cup and will begin his stud career at Three Chimneys Farm in Versailles, Ky, near Lexington.