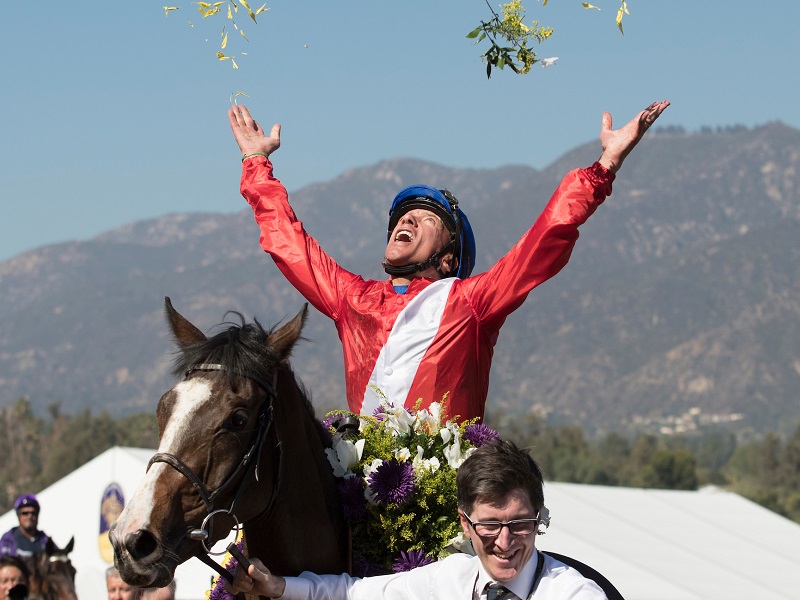 The 47-year-old riding legend is hopeful that his return visit to the Hallandale Beach racetrack will be as productive as his last visit on Nov. 6, 1999, when he guided European and U.S. champion Daylami to a 2 ½-length victory over Royal Anthem in the Breeders’ Cup Turf (G1).

“It’s going to be the richest race ever run on the planet. I think the big credit must go to Mr. (Frank) Stronach for coming up with his idea,” Dettori said. “Of course, I’m excited. If you can’t get excited about it, there’s no point in getting out of bed.”

While Daylami was favored at 9-5 in the 1999 Breeders’ Cup Turf, Toast of New York figures to be a longshot in the Pegasus World Cup, which has attracted the first five 2017 Breeders’ Cup Classic (G1) finishers – Gun Runner, Collected, West Coast, War Story and Gunnevera – as well as the brilliant Cigar Mile (G1) victor Sharp Azteca, Eclipse Award Champion Stellar Wind and four other prominent U.S. performers.

Toast of New York, however, is no newcomer to the ways of U.S. racing. The 7-year-old son of Thewayyouare has shown a distinct fondness for American soil in two main-track appearances in the United States, falling just a nose short of catching Bayern while finishing second in the 2014 Breeders’ Cup Classic (G1) at Santa Anita three months after coming in second behind Shared Belief in the Pacific Classic (G1) at Del Mar.

“We know that he handles the dirt. He was second in the Classic,” said the native of Milan Italy, a three-time champion in Great Britain, where he has won more than 3,000 races, including all of the classics. “That form is good enough. We’ll roll the dice and go for it.”

Al Shaqab Racing’s Toast of New York, who was retired to stud shortly after the 2014 Classic due to a soft-tissue injury, was placed back into training last year and returned to action after a three-year absence with an allowance victory over the synthetic surface at Lingfield Park Racecourse in England Dec. 6th.

“It was an achievement in itself to come back after three years and to win was even more remarkable. All the credit goes to the trainer (Jamie Osborne). He got him back after over 1000 days off,” Dettori said. “The horse felt very rusty to me. He was probably only 70 percent. He has built on that. I think we know his past performances are good enough for him to give a good account of himself. The thing that we don’t know: Is he still the same horse he was three years ago?”

Dettori continues to demonstrate the talent and passion for riding on Thoroughbred racing’s biggest stages. Last year, he enjoyed enormous success aboard Enable, a 3-year-old filly who was named 2017 Cartier Horse of the Year after winning five Group 1 stakes, including the Prix de l’Arc de Triomphe.

“I just finished my 30th year as a professional jockey. I’ve cut down on the riding. I’ve concentrated on the good stock. For that reason, it has prolonged my career,” he said.